The longtime “Daily Show” humorist offered a Turner Hall show, most of which might have played better at a Yale reunion.

During an appearance on the WTF with Marc Maron podcast, John Hodgman made it clear that he is not exactly a stand-up comic. He is an author, actor and humorist. The Massachusetts native has penned a trio of books, appeared on a series of radio programs and a number of television shows (most famously, as “Resident Expert” on The Daily Show). Thanks to modern technology, Hodgman was able to parlay his witty musings and anecdotes onto the stage in a Netflix Original special, John Hodgman: Ragnarok, which, by the way, derives from Scandinavian mythology and refers to a final battle between gods and evil powers that destroys the world.

Trying to get a drink and a seat at a bar before Hodgman’s performance at Turner Hall last night felt like a battle between myself and a sea of Pearl Jam fans, who awaited their gods at the Bradley Center. Mystery Science Theatre 3000 alumni Kevin Murphy and Bill Corbett opened for Hodgman. They performed a hodge-podge of purposefully bad improv, riffing on obscure movie titles from IMDB, and silly songs, delivered in an NPR-friendly comedy style. Hodgman flipped the script with his entrance, letting the Pixies’ “Where Is My Mind?” bang for a minute before emerging in a zipped up jacket, hood on top of baseball cap, with sunglasses on.

Hodgman’s get up felt like an homage to the elaborately decorated set of Ragnarok, since it related to his opener about recreational rainy day cemetery visits with his daughter. This was followed by a hilarious anecdote about Patrick Warburton (Puddy from Seinfeld) preaching the gospel of Pearl Jam. Then he got me to question my allegiance to dogs with a funny, morbid bit about cats. A strong opening, no doubt.

But somewhere around the 20-minute mark the show entered “The White Privilege Mortality Comedy of John Hodgman” arena, noticeably less lively than the one across the street. As he told Maron on WTF, he is not a stand-up comic by trade, and after putting the bulk of his stage-friendly material into Ragnarok, Hodgman has turned to tales from his life. That included summer vacations in western Massachusetts and Maine, accidentally buying a boat, and navigating the awkward social seas of the elite Northeast.

I can’t disagree with my friend, who used to live in Boston, when he said, “Those stories might play well at his Yale reunions, but they’re just not that funny or relatable.”

Yet, there were endearing bits about the bachelor pad he set up in a wing of his parents suburban home, helping his son with bullies, and getting high with fans in the woods. But considering how personal and dark the set was, it almost felt like an episode of WTF with Marc Maron. Hodgman ended on an upbeat musical note, with an original song about loving his home state while driving with the radio on, an almost universal notion. To close the show, Corbett and Murphy joined him for a cover of The Handsome Family’s “So Much Wine.” 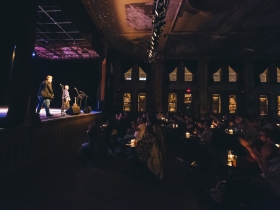 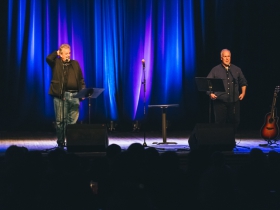 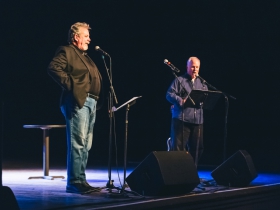 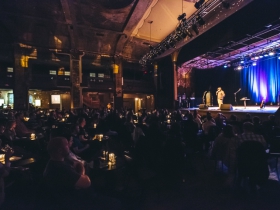 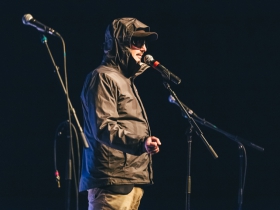 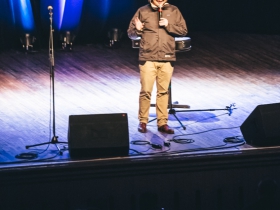