The Sleazy Rock of Ramma Lamma

The group has put out 7-inches on labels local (Dusty Medical), national (Certified PR and FDH) and international (Goodbye Boozy). Their clever, in-your-face songs about runaways, street gangs, partying, and rock ‘n’ roll are fun, loud and quite likely to make you involuntarily pump your first in the air and sing along — the perfect reaction to a 45.

“With singles, it’s kind of like you find some random label that wants to do singles, and it can be pretty quick where you’re releasing material that is actually current to you writing the song, still being excited about it and getting it out in a short period of time,” says Ryan King, who started the band in 2010 with his wife, Wendy Norton, after their previous group, Plexi 3 dissolved.

But then Ramma Lamma started writing too many songs.

“What inevitably happened was we had so much material it was having the opposite effect: it was backlogging us so much,” he says. “I think we were thinking let’s just do an album so we can get a big spurt of songs out there and maybe try to catch up.”

Ramma Lamma’s sleaze-riffic first full-length album, Ice Cream, was released in July by Certified PR, a St. Petersburg, Fla.-based label run by Wisconsin native Steve Ziarnik. King is self-deprecating in describing how the recording process for the album went down.

“The recording process is basically the same if we are doing a single,” he says. “We just go down to the basement and demo it and then just mix the hell out of the demo and say, OK this is good enough, and put it out. Most of our records are kind of like this is the best we could ever make this demo sound.

It took a bad experience for Ramma Lamma to learn that their independent, lo-fi style worked best for them, says bassist Daniel James. They did try to record the album at a proper studio. But they completely hated the result.

“We wound up scrapping the whole thing, ‘cause we didn’t like it anymore,” even though they had “paid a bunch of money to go into this studio that had a lot of killer gear,” James says. “It took us wasting a bunch of money on a sterile, soulless recording to realize how much better it sounded when we did it all ourselves.”

James is pleased with how the new album, which he had begun to think would never become a reality, ultimately turned out.

“It sounds awesome,” James says. The mastering job by Matthew Melton (of the Oakland band Warm Soda) “took Ryan and Wendy’s mixes to a whole new level. I think if I wasn’t in the band it’d still be something that I’d want to listen to all the time, and I hope other people dig it, too.”

There’s certainly a lot to like, starting with the album-opening title track, which uses a double-entendre to great effect. King got the idea for the song after listening to a mix tape Norton made with a pre-rock ‘n’ roll, R&B song that took a similar approach, during a back-and-forth talking between the male and female singers.

To top it off, King decided to start “Ice Cream” by invoking a song often used by an ice cream truck, and thought of “Pop Goes the Weasel” and “The Entertainer.”

“Basically I tried both of them, and realized ‘The Entertainer’ could easily be mish-moshed into this Slade/Sweet kind of intro/melody, so that’s what you have at the beginning of ‘Ice Cream’ if you pay attention,” he says.

“A few of the songs that are about movies or whatever, it’s true to the story of the movie, and the next verse is about something that didn’t even happen in the movie that’s just kind of dumb, fun rock lyrics,” King explains.

Another song, “Hot Denim,” also includes a B-movie angle, but it came about as King was walking his dog, Batman, a puppy at the time.

“We just got this dog, and I was excited about having the dog,” he says. “I was going for a walk with him, and I was thinking, how can I just mention dog in a song? So I was racking my brain for how I can involve dog and also involve your typical, Ramma Lamma, sleazy rock ‘n’ roll subject matter. We were walking over the KK River bridge, and I thought to myself, sometimes in prison movies they chase people through swamps and rivers with dogs. Then, I’m like it’s going to have to be about a woman escaping from prison, and it’s gonna be a sleazy, sexual song.”

Ramma Lamma was formed after Plexi 3’s bass player Adam Widener left Milwaukee for San Francisco, and at the same time, King and Norton were losing their passion for Plexi 3’s brand of power pop, which took its cues from The Jam and The Soft Boys.

“We didn’t know what we were going to do,” King says. “We both started kind of doing demos for possible solo projects, and we were both leaning more toward the rock ‘n’ roll thing, which is just kind of natural because that’s more from where we both come from with the first bands we did. The first stuff that made me want to play was basic rock ‘n’ roll music. The last band we did was so serious and so involved. We were ready to get a little less stressful and get back to just having fun with music.”

Ramma Lamma started as a trio with Joel Kopp (Widener’s former bandmate in The Jet Set) on drums, and Norton and King would switch off on bass and guitar. Eventually, James was asked to join as bassist, and Sam Reitman from Midnight Reruns replaced Kopp on drums. The group now features Bart Ferrara, formerly of Bleed and The Pills, as drummer.

At the end of July, Ramma Lamma traveled to New York City to play four shows in Brooklyn with garage punk band The Mad Doctors, whose drummer Greg Hanson stepped in for Ferrara at Norton’s request.

“Every night was pretty awesome,” says King. “There were really great bands every night; people were really into it. It was a lot of fun.”

Adds James, “Having seven full days in the same city was like being on a fun vacation and getting to play rock ‘n’ roll music every day. I really hope Ramma Lamma can tour more in the future, because our songs rule and it’s a shame if we can’t share them with the people.”

James also offers his take on what it takes to be a member of Ramma Lamma: “Good taste. The ability to rip it up and still have a good ear for what makes the song rule. You can’t be playing some weak Neil Pert crap when it covers up the vocal melody. I think all four of us are good enough musicians that we could make all the local prog rockers look like hacks if we wanted to, but the most important part of any Ramma Lamma performance is the song. You gotta lay back and let the tune make all the butts shake and make the girls scream. Come in and play some wild stuff where it’s warranted, but don’t ever detract from the song ‘cause you wanna look like Jimmy Page or something.”

Ramma Lamma is available for weddings and children’s birthday parties. Ice Cream can be purchased from Certified PR Records. The band performs next on Sunday, October 26, with several other bands at the Bremen Cafe (starting 9:30 p.m.) 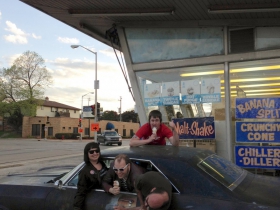 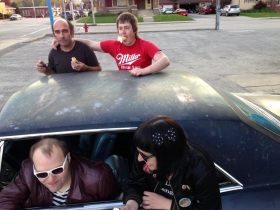 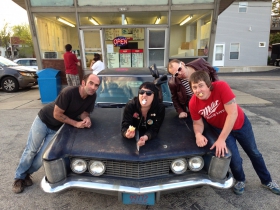 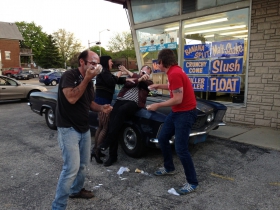 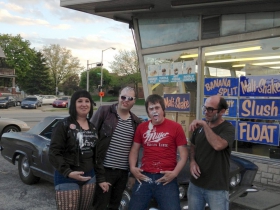 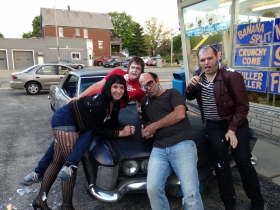