The Art of Dara Larson

The artist and Alverno College teacher first started thinking about art in kindergarten. She hasn’t stopped since.

Some people know from an early age what they will do. Dara Larson announced at her kindergarten graduation that she was going to grow up and become an artist in Milwaukee. Today she teaches art at Alverno College and is an artist whose work has been exhibited at a long list museums and galleries.

Larson was born in Hart Falls in northern Wisconsin, the kind of small, rural town where you had to make your own fun. Yet for Larson it was the cocoon of her creativity. As a kid she built stick houses and loved being outdoors. She vividly recalls her free spirited primary school teacher, who never tried to suppress the students expressions and therefore allowed them to be the best artist they could be. Without that experience, Larson says, “I probably wouldn’t be where I was today. She was just so wonderful and modeled that whole idea that if it is coming out of you creatively, then it is your vision, it is your voice.”

Larson also had an uncle who was a wood carver and another who was a commercial artist. She was surrounded by art and architecture from a very young age. Her family also took trips that influenced her, including a trip to Mexico, which struck her this beautiful, mystical place. “The thing that I can still remember is in Ensenada and Tijuana. I remember just standing there as an eight-year-old trying to comprehend how people could live in cardboard boxes. I think that was this huge moment in my life and I stayed very connected to what happens to people when they migrate, what happens to people in situations of poverty. How do you use your resources to live and to work?”

For college Dara attended UW-Stout. After receiving her degree she traveled to Salamanca, Spain to study abroad, and she also traveled across Europe. She later attended UW-Milwaukee, getting her Master of Fine Arts in Printmaking and Drawing. Soon after she began teaching at Alverno. There she has served on the International Studies Committee and by her third year of teaching was prepping to take students abroad. Larson has constructed study-abroad courses, one of which consisted of her students traveling to Spain to study the architect and artist Antoni Gaudí.

A typical day for her, she says, is waking up and studying from 5am till 10 a.m. Then, most of the day is spent preparing for and working with her students. Larson often spends four or five hours at night doing working on her own art work.

As her resume shows,

Larson’s work has been exhibited at museums, galleries and art centers in Milwaukee, Madison, Chicago, St. Paul, Michigan, Maryland, Texas and Japan. Lately, she has been doing a lot of paper making, often on topics that are weather related. She most recently did a series called The Fog — based on the eerie fog Milwaukee experienced this past summer. She wanted to convey this sense of a city that is not usually thought of as foggy.

Another theme in her work is the idea of “ghosts cities”. These are cities being created in places like Kumbashi in China, or Kumba in Angola on speculation. Their creators believe that if they build the city people will want to inhabit it, but not many have come because they can’t afford it. This leaves cities built for one million people left with only ten thousand inhabitants.

Larson recently showed her work at the UWM Union Art Gallery and loved the experience. “I love talking with the student staff at the gallery, and a lot of students came to the opening and asked questions and talked with me …and then Laura, who curated the show, was marvelous with everything…it was wonderful to see what sort of curatorial vision she was going to come up with. I really enjoyed her selection.”

Now Larson is working with Redline, an artist workshop with a mission to support emerging artists with an interconnected teaching and learning community. She’s also getting into a series of works that are about invention and loss, using letter press printing and paper making. It’s a fertile subject for an artist. As Larson puts it, “The speed at which we are inventing newer and newer things is making us throw away things that we might need again some day.”

You can view Dara Larson’s work on her website: www.daralarsonfineart.com 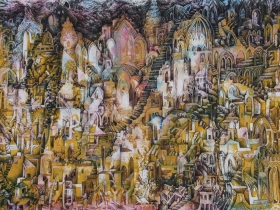 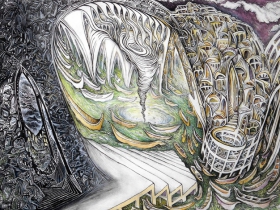 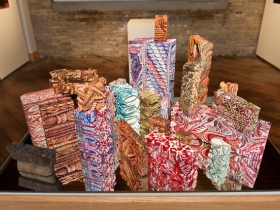 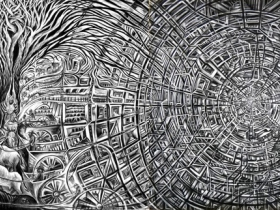 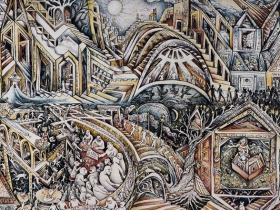 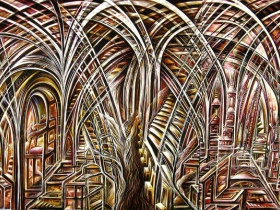 0 thoughts on “Profile: The Art of Dara Larson”