By Bill Lueders, Wisconsin Center for Investigative Journalism - Sep 11th, 2014 11:16 am
Get a daily rundown of the top stories on Urban Milwaukee 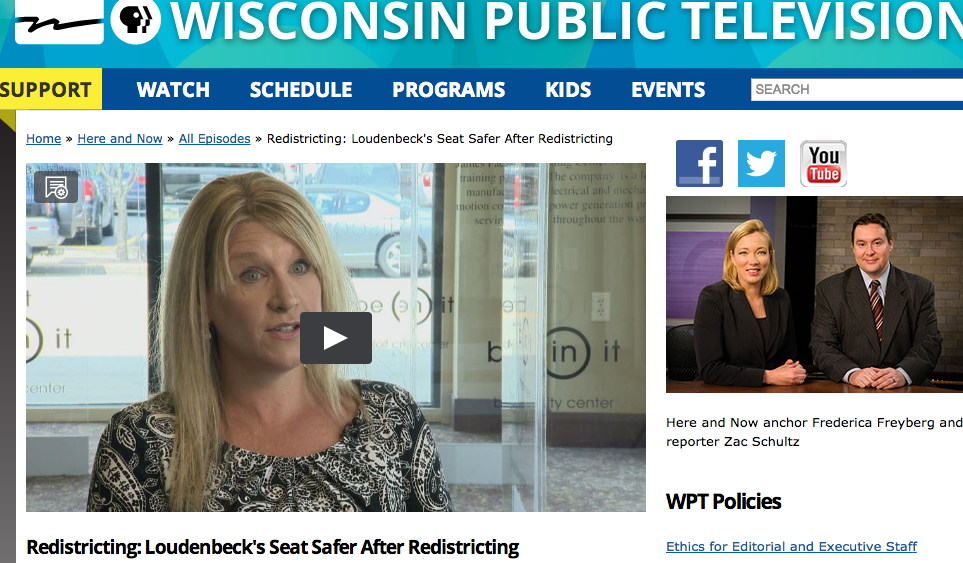 It’s also a microcosm of something else: the redrawing of voter boundaries for partisan ends. Hence WPT’s interest.

Loudenbeck was first elected, in 2010, to a district that included all of Beloit, a Democratic stronghold. She lost in the city but, “with the tea party wave at her back,” as WPT reporter Zac Schultz put it, carried the outlying areas to snare 54 percent of the total vote.

Then came the eruptions of 2011, over curbing collective bargaining for public employees and cutting funds to public schools. Loudenbeck backed these changes, along with a new state voter ID law. Democrats warned that she would pay in the 2012 election, a consequence Loudenbeck was prepared to accept.

“I was very aware that there were people that were going to be unhappy,” Loudenbeck told WPT. “I didn’t have an expectation of winning a second time.”

But she did win, by an even greater margin of 56 percent, after Republicans oversaw a secretive and costly redistricting process, after the last 10-year census. Loudenbeck’s new district kept her hometown of Clinton but included less than half of Beloit and contained, by her account, “about 50 percent new people.”

Loudenbeck finds this laughable, noting that hypothetical nonpartisan maps produced by a state agency at Cullen’s behest split these districts in a similar way. But Schultz, in his report, said “the facts are clear: Amy Loudenbeck’s re-election prospects went way up with the change.”

Indeed, her margin of victory was almost exactly what strategists redrawing the voter boundaries predicted, in documents made public via a redistricting lawsuit. New computerized mapping technologies have allowed politicians to pick their voters with astonishing precision.

WPT, in a companion report, found that the strategists’ predictions in the more than 50 GOP-held Assembly seats facing Democratic challengers in 2012 were accurate, on average, to within a single percentage point. The GOP incumbents won all but three of these races.

One way to maximize partisan advantage is to pack as many opposite-party voters into as few districts as possible. In the district that acquired the shorn majority of Beloit, Democrat Janis Ringhand won with 64 percent of the vote, up from her 53 percent margin of victory in 2010.

In the upcoming Nov. 4 election, the Democrat seeking this seat is unopposed; so is Loudenbeck. Partisan redistricting took two competitive districts and made one so overwhelmingly Democratic and the other so safely Republican that general election voters will have no choice at all.

Overall, 55 of the 116 legislative seats are uncontested on the ballot. In 2010, before redistricting, only 24 seats lacked general election rivals.

Cullen, who is not seeking re-election (Ringhand won the primary in his largely Democratic Senate district), finds this deplorable, telling WPT “neither political party should be trusted to draw the maps.”

Dissenting from this view are the Republicans who control both houses of the state Legislature and have a good chance of doing so after the fall election. Loudenbeck, while acknowledging that “some of the districts became less competitive” due to redistricting, does not consider the process flawed.

But advocates are using the election to force the issue. Common Cause in Wisconsin and its supporters are asking candidates for state office to pledge support for nonpartisan redistricting.

Among the roughly five dozen signatories are Ringhand and Mary Burke, Democratic candidate for governor. As of early September, no Republican candidates had made the pledge.

Bill Lueders is the Money and Politics Project director at the Wisconsin Center for Investigative Journalism (www.wisconsinwatch.org). The Center produces the project in partnership with MapLight. The Center collaborates with Wisconsin Public Radio, Wisconsin Public Television, other news media and the UW-Madison School of Journalism and Mass Communication. All works created, published, posted or disseminated by the Center do not necessarily reflect the views or opinions of UW-Madison or any of its affiliates.