New leadership and still lots to see at APT; and the Milwaukee Rep offers a country music cabaret show.

Could this be a trend in culture as well as politics? Two women led the Wisconsin voting parade in the primary Aug. 12, Mary Burke and Susan Happ. Now two women – Brenda DeVita and Carrie Van Hallgren – will run the state’s biggest theatrical attraction, the American Players Theater.

As previously announced, DeVita moves up from associate artistic director to artistic director. That makes her responsible for 2015 season selection, choice of artists and general artistic vision. As just announced by the APT board, a new co-leader has been named: beginning in January, Van Hallgren will become managing director, mainly responsible for the administrative and promotional side. The Platteville native has an MFA in theater management from Yale, where she also held management positions with the Yale Repertory Theater. She’s worked extensively as educator and theater leader at University of Minnesota and Davidson College, and held top positions with Milwaukee Shakespeare and Chamber Theater.

In openly moving to a dual leadership role, the APT board was indirectly acknowledging the rarity of a leader who can handle it all — artistic direction, casting, funding and motivating a second popular stage and core artistic unit yet creating operational budget surpluses every year. But that’s what Producing Artistic Director David Frank, now retiring at age 70 after 23 years at the helm, has managed, directing some 37 productions for the APT.

In a phone interview I congratulated Van Hallgren on her new role created for the company, commenting on how many cultural organizations have had to address similar problems – but only a few had the gumption of APT to openly change the entire leadership structure and say aloud what was happening behind the scenes.

Survival and continuity in the arts require empathy in finance and marketing. It may be attractive to the public to claim it is all “one genius, one vision,” but sticking with that image has tormented opera, dance and theater companies.

“I well understand how each company has to decide for itself and its own circumstances,” Van Hallgren says. “But I prefer the collaborative model and I couldn’t be more pleased — especially when you have people whose views and abilities are compatible.” That is certainly her expectation with DeVita, whose backgrounds and interests dovetail.

APT has grown way past what many in Wisconsin once thought of a summer fling on a hill. Now, when its publicity department claims that it is “one of the nation’s most popular classical theaters,” that’s not an idle boast.

The company starts gathering for rehearsals in May, though the designers have been at work even longer. It begins performances in June and continues to add productions while continuing early productions into November – almost a definition of the meaning of repertory.

The theater company, nestled between an extensive golf course and the woods along the Wisconsin River near Spring Green, has proven over 35 years more than a beautiful spot to enjoy theater. It has become a major employer. Not only locals but many performers now live in the area nearly year round. It contributes talents and aura to a number of cultural outlets around Spring Green. It has traditionally chosen actors from the key areas of its reach, which includes Milwaukee. Some 16,000 of APT’s 100,000 seasonal visitors come from the Milwaukee area. Now the dilemma for the new leaders is freshening the quality and range while spreading the ties to theater in general and this approach in particular.

Dial reviewed three of the five productions that began the season – Romeo and Juliet and Oscar Wilde’s The Importance of Being Earnest, both outdoors as you climb up the famous acoustically ideal hill. Also reviewed was the indoor Touchstone Theater production of The Year of Magical Thinking.

These productions started off in tandem with American Buffalo (indoors) and a much admired production of Shakespeare’s Much Ado About Nothing. All continue through September.

In early August these productions were joined outdoors by Shaw’s The Doctor’s Dilemma and Chekhov’s The Seagull with Milwaukee favorite James DeVita (a pioneer name at APT even before his wife took the co-reins). In mid-August (indoors) the APT added Tom Stoppard’s clever modern commentary on Wilde and Dadaism, Travesties, using the same cast and director as Earnest. (Visit americanplayers.org. for full schedule, casts and calendar.)

On October 18 all these productions will be joined by the APT indoor finale, the last announced directing foray of Frank, its eminent retiring leader. He has chosen the earliest Greek tragedy in existence in a free-form translation first used after the death in 1998 of eminent British poet Ted Hughes.

Euripides’ Alcestis employs a structure of chorus and commentary with themes that remain particularly contemporary and demanding — feminist values fighting an entrenched male power class, sacrifice and selfishness, mysterious identifies in the face of decreed death. The outline has some familiarity to veteran theatergoers even if they’ve never encountered the original. Euripides’ story has inspired dramas and comedies as diverse as Shakespeare’s The Winter’s Tale and poet T. S. Eliot’s most popular stage work, The Cocktail Party.

The Rep Gets Its Country Music On

This season is a break – not from top talent given the names involved but from groundbreaking exploration of established genres. Instead the focus is more familiar fare for cabaret patrons – an emphasis on the allure of nostalgia and affectionate comic takeoff on Americana musical motifs and personalities. So in November, audience favorite Jack Forbes Wilson returns to re-create Liberace. In January a Grammy artist and banjo master, Stephen Wade, will explore an entire evolving repertoire of lasting melodies in The Beautiful Music All Around Us.

But first out of the gate September 7 (after a few previews) and running through November 2 is a takeoff on country music in Bruce Arnston’s spoofery, The Doyle & Debbie Show.

No, nothing to do with a former Wisconsin governor or Eddie Fisher’s ex.   This is a send-up of country music with 16 country songs written for the show with pointed humor (“Stock Car Love”) and echoes of notable country standards — harmonies and instrumental attacks that will resonate with country music buffs, and probably anyone with a pop music ear.

This show has a history of tickling ribs outside country music devotees, demonstrating you don’t have to be a buff to admire its theatrical construction and repartee. It’s been getting laughs since 2005 from Tennessee to Chicago. Among its fans are veteran associate director JC Clementz who is at the helm and Rep artistic director Mark Clements, who picked the show to open the Stackner 2014-2015 season. The Stackner is the space where, if ordered ahead of time, you can get meals that are also quite rib-tickling, or enjoy a drink. There is table seating as well as roaming servers before the shows.

The Rep will introduce three newcomer performers to the Milwaukee Rep for these performances through November 2: Michael Accardo, Erin Parker and Bo Johnson. The mischief centers on a has-been country singer who finds a new singing partner to resurrect a famous sound and career. Check the theater’s website for information on tickets. 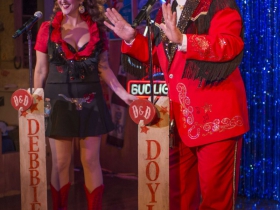 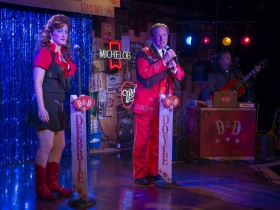 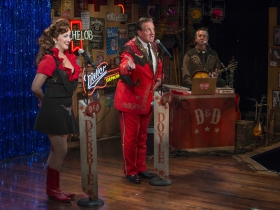 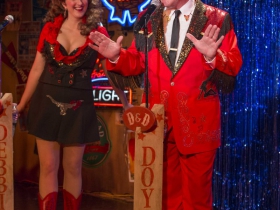 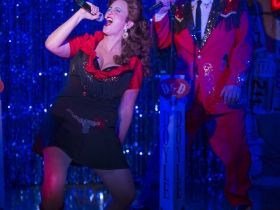 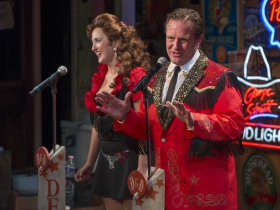