The Curious Contradictions of Christian Schneider

Journal Sentinel columnist admits killing Obamacare would hurt Wisconsin, even as he bashes it.

In a recent column for the Journal Sentinel, The GOP’s perilous way forward on health care, Republican loyalist Christian Schneider makes a stunning concession to reality: a federal appeals court decision in a case called Halbig vs. Burwell, is a threat to states like Wisconsin that decided to send their residents to the federal exchange rather than build their own.

Before reaching Schneider’s insight, however, the reader must wade through several paragraphs of gloating over the court’s literalist reading of the sentence in the Affordable Care Act authorizing federal tax credits for people buying insurance through the exchanges. The offending sentence mentioned only state exchanges, neglecting to refer to federal exchanges. Despite all evidence to the contrary, the court concluded this omission was deliberate.

And, of course, no discussion of Obamacare from the right is complete if it doesn’t claim — without providing any evidence — that the act has failed. Thus, Schneider compares the ACA to “a pile of flaming tires on the nation’s landscape.” If he has ambitions to be considered more than a propagandist, Schneider would be well advised to acknowledge early evidence that the act has reduced the number of uninsured.

But all this serves only to obscure Schneider’s big breakthrough. At the midpoint he suddenly has some wise — and revealing advice — for his fellow Republicans:

If Republicans were smart, they’d spend more time on what Halbig could mean for the future than how the case was decided.

He goes on to explain the positive impact of Obamacare on Wisconsin:

Wisconsin, of course, was one of the states that opted out of setting up a state exchange, meaning it is going to rely heavily on the ACA’s premium subsidies. According to the U.S. Department of Health and Human Services, nearly 140,000 people in Wisconsin have signed up for plans via the federal exchanges, with 91% of those eligible for the low-income subsidies.

He then calculates the drastic impact of losing Obamacare’s subsidies:

If the Halbig decision were carried out to its full conclusion… it would be catastrophic for the state. Take a hypothetical family of three (mom, dad, 5-year-old kid) in Milwaukee making around $20,000 per year. According to the ACA premium estimator website, that family would pay $9 per month for the lowest level “Silver” plan. But that premium is subsidized with a $569 per month tax credit — without the subsidy, that family would be shelling out $578 per month. That’s 35% of their annual family income.

Unfortunately Schneider doesn’t point out that the simplest solution would be a technical fix for the act; for Governor Walker and others of the–mostly Republican–governors depending on the federal exchange to get behind a bipartisan correction bill to add the word “federal” to the offending sentence in the ACA. Presumably he doesn’t mention this straight-forward solution knowing that by doing so Walker and the other governors would offend the Tea Party segment of their base, as well as Milwaukee talk radio. At this point the safest course for Walker and his colleagues is to hunker down and silently hope the courts will rescue them by overturning the Halbig decision. Most legal experts are expecting the rescue will come. Schneider’s seeming solution to the threat of impending doom is that Republicans finally get behind the “replace” part of “repeal and replace.” He points out that as more and more people benefit from Obamacare, simply repealing it is a nonstarter. 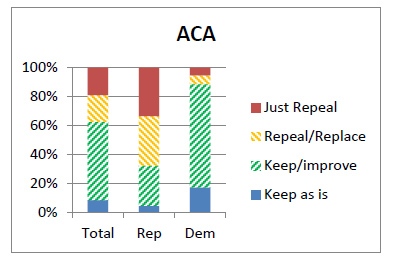 Indeed, simply repealing Obamacare has never drawn the support of a majority of Republican voters, much less of all voters. The chart to the right shows results of the March 2014 Marquette poll when people were asked what to do about the ACA (I have left off those not answering the question).

Less than 20 percent of respondents want to repeal it, and even among Republicans less than 40 percent favor repeal. Solid majorities of all groups selected one of the middle options: repeal and replace or keep and improve.

So why haven’t Republicans gotten behind a replacement plan? Schneider notes individual Republicans have offered plans, but neglects to mention that none has managed to gain widespread support even among Republicans. A quick look at the plans he refers to suggests why coming up with an alternative is so hard.

The online version of Schneider’s article links to an April 2013 article whose authors analyze a plan of their making. The core of their plan is a tax credit of $2,500 for an individual and $5,000 for a family of four. People not signing up for insurance would be assigned a “default plan” whose price would be exactly equal to the tax credit. Unlike with the ACA, this credit would not vary with income, so one attraction of this plan would be that everyone who didn’t buy a plan would get one for free.

How would the family of three that Schneider mentions fare under this plan? Remember, Schneider noted that the unsubsidized cost for the two adults in this family is $578 per month or $6,936 per year (Medicaid would cover their child), leaving a gap of $1,936. Rather than allowing the insurer to increase its premium, the plan would allow it to adjust the up-front insurance deductible to close the gap. If the parents were older than the 35 years old, the up-front deductible would grow larger still. The result could be a large number of “insured” people who never use the plan because of the high upfront deductible.

Schneider refers to “one notable plan” without identifying it. Likely he means “Patient CARE Act” introduced at the beginning of this year by three Republican senators. It has not succeeded in gaining broad support from other Republicans. The Washington Post’s Sarah Kliff describes it as a plan that economists will like but real people won’t. It has both similarities and differences with Obamacare. One notable difference is that rather than the individual mandate, its incentive for buying and keeping insurance is that people who let their insurance lapse and then try to buy insurance would face higher costs based on their health.

A challenge for any replacement plan is funding. Both these plans cited by Schneider propose reducing the tax subsidy for employer insurance, which helps explain why they haven’t received much Republican support. For Republicans, eliminating tax breaks counts as a tax increase and tax increases are forbidden. And of course the majority of Americans who get their insurance through their employer won’t be happy to see their costs rise.

Other parts of funding are left vague. Here is a quote from the first plan:

Although offering an actual plan should be encouraged, both plans have a long way to go before they could be enacted. Neither proposal has been analyzed by a neutral party such as the Congressional Budget Office.

Why haven’t Republican lawmakers coalesced around a viable alternative, as Schneider proposes? The answer is that it is far easier to find fault with something than exists than to gain consensus on any new proposal. For today’s GOP, which once prided itself as the party of ideas, moving forward on health care is more perilous than mindless opposition.

4 thoughts on “Data Wonk: The Curious Contradictions of Christian Schneider”