The Gathering at Fondy Farm

Sunday’s fundraiser for the Fondy Farmer’s Market was a memorable salute to local food.

It’s hard to imagine a more successful — or pleasurable — fundraiser than the 3rd annual Fondy Farm Feast, held Sunday on the farm owned by the Fondy Farmers Market near Port Washington. Some 250 guests toured the farm and then ate a wonderful six-course dinner featuring all local ingredients and Fondy Farm-raised produce. The wine and conversation flowed, new friendships were formed, and all sorts of local chefs and farmers and producers were introduced. We all left as confirmed locavores, still savoring the taste of all that great food.

The Fondy Farmers Market is one of the most venerable such markets in Milwaukee. It started 96 years ago on 29th and Center, where it was called the Center Street Haymarket, and moved to Fond du Lac Ave. and assumed its current name in 1980. The 48,000 square-foot open-air market is the largest and most diverse market in the metro area, with products supplied by 30 farmers and some 2,500 customers served weekly. It’s open May through November. While its customer base is quite diverse, it is a mainstay for low income families and in 2013 was among the top five farmers markets nationally for food stamp sales, which topped $51,000 at Fondy Market.

Fondy Farm, with its 80 acres of farmland located near the lakefront and north of Port Washington, was created in 2010, to support small-scale, limited resource farmers and to assure a steady supply of fresh vegetables, fruit and flowers for the Fondy Market. The land is heavily affected by the lake effect, so farmers have to wait till mid-May to plant but may continue harvesting through the entire month of December. Last year more than 260,000 pounds of produce was grown at the Fondy Farm, including about 40 different kinds of crops.

The Fondy Farm has been an interesting project, with a mix of Hmong, white and black farmers getting involved. As Fondy Market executive director Young Kim has written in a column for Urban Milwaukee, the Hmong have their own farming traditions that can be quite different than the more “modern” style of farming.

But food has a way of bringing people together, and the Sunday fundraiser was a celebration of local farmers like those from Alice’s Garden and Busy Bee Farm, such local chefs as Bruce Evans, instructor for the MATC Culinary Arts Program and Yollande Tchouapi Deacon of Afro Fusion Cuisine, and such local providers as Clock Shadow Creamery, Sprecher Beer and Colectivo Coffee.

Kim introduced the various chefs, farmers and providers, and the crowd cheered heartily, in between savoring the food and wine and beer. The dinner was served on tables underneath a huge, open air tent, as the sun gradually set, a stunning ball of yellow sinking over acres of green, locally grown crops. 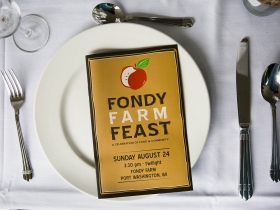 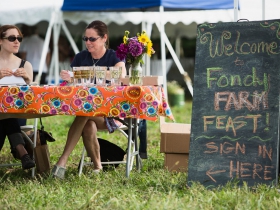 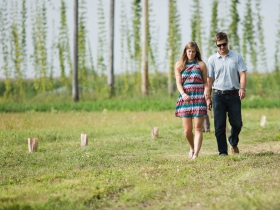 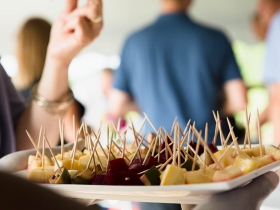 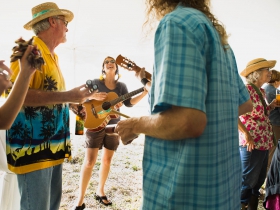 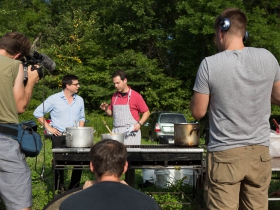 0 thoughts on “The Gathering at Fondy Farm”