Enjoy food, drink, Polish and Mexican music and join an 11-mile bicycle romp through Milwaukee's South Side on Friday.

Be the first to ride the new 6th Street Viaduct bicycle ramp to W. Freshwater Way! Do it to the blended rhythms of Polish and Mexican music on an 11-mile bicycle romp through Milwaukee’s fabulous South Side, a melting pot for over a century. 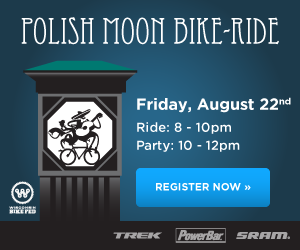 The opening of the new bike ramp, announced today, is a surprise addition to the evening’s itinerary.

“We will be the first to officially ride down the ramps on 6th Street to Freshwater Way. The City has agreed to remove the barricades just in time for the ride,” Schlabowske writes.

“I made a polish/mexican music mix and have 4 bluetooth bike speakers to scatter through the crowd. People are encouraged to wear helmets, bring lights and a lock, but we will have valet parking. We have 177 people pre-registered.”

He describes the ride as a “tour through Milwaukee’s Historic Polish neighborhoods that also celebrates the current Latino culture there.” The event begins with a leisurely 6-8 p.m. dinner hour at Anodyne Coffee’s new facility at 234 W. Bruce St., located in a converted industrial building. The menu includes tacos and Polish sausages, along with neighborhood-made ice cream and cheese curds, a blend of old and new with a platinum locavore LEED rating.

Live music from La RondallaVoces & Guitarras de Milwaukee will accompany the sedentary portion of the evening.

At 8 p.m. riders take off for an 11-mile tour of the South Side, although Shlabowske has thoughtfully provided an abridged route for those with children or a the urge to leave the pack and go have one somewhere.

“There will be polka music played on the ride, live from the back of a Bionix powered Xtracycle Edgerunner from Coast Inn Bikes,”Schlabowske says.

He also has an assignment for this writer:

“I plan on giving you a megaphone to share pearls of historic wisdom along the ride too. I might call the Holler House as we ride west on Lincoln so Marcy can come wave to us as we turn the corner by her bar.” [See this week’s Urban Milwaukee Dial Tavern Review: “Holler House has America’s Oldest Bowling Lanes”]

Afterward, the leisurely ride ends where it begins, with more polka and beer from Milwaukee Brewing Company along with other goodies until 11:30 p.m., when the intrepid may take off for an afterparty at Kochanski’s Concertina Bar. Many other sponsors and vendors are listed on a map of the ride.

The cost for the ride is $35; $25 for neighborhood residents and Wisconsin Bike Federation members. Tandem tickets are $50.

For more information, or to register: the registration page or visit the Polish Moon Ride Facebook page.

Some South Side “Pearls of Wisdom”

I wrote the following notes which will appear in the manifest for riders at the Polish Moon Bicycle Ride Friday.

By the late 1880s Milwaukee was the home of 30,000 Poles, second only to the 50,000 Germans among the growing city’s immigrant population. Most Poles were from the German part of their homeland and were initially as wary of their Teutonic neighbors here as they were in Europe. Thus, while the Germans largely lived north of the Menomonee Valley, the Poles created settlements on the South Side for the most part.

One thing all Milwaukee’s immigrants had in common was the desire for homeownership. The Poles did so most ingeniously, and thus was born the “Polish Flat.” The Poles maximized their meager resources by first building a simple home on a wooden foundation. By the time the foundation began to rot, the building was raised, a new foundation and above-ground basement was added, creating a new residence for a family member. Often additional houses would be erected on the rear of the lot.

Second only to their homes, the Church was the center of Polish family life. In 1872 St. Stanislaus Church, with its two steeples and eight clocks, became the first Polish parish in Milwaukee, and the second in the United States. It is the “Mother Church” of all Polish congregations here including the grand Basilica of St. Josaphat (1896). This imposing building dominates the neighborhood of modest Polish Flats, the owners of which mortgaged their homes to build the church.

The building shows the same thrift and economy that characterizes its first parishoners. Rev. Wilhelm Grutza, who commissioned the church for his 10,000 congregants, had the architect redraw the plans to make use of the 500 rail cars of dressed block that he bought for $20,000. The stones had originally been the U.S. Post Office in Chicago, and were stored in a vacant lot across the street. Leftover stones were used to construct the building now there. A close look at the basilica will show eagles from its earlier incarnation. Some door knobs have USPO logos.

There was one other element in the trinity of Polish life — home, church, and tavern.

The Holler House has been in the Skowronski family since it opened in 1908. It includes the oldest sanctioned bowling alley in the United States, and offers neighborhood kids employment opportunities as pinsetters.

The outlier in this neighborhood is Forest Home Cemetery, owned by the warden and vestrymen of St. Paul’s Episcopal Church on the East Side. Wealthy and Waspy Protestants, who would never think of visiting the South Side while alive, chose to spend eternity there at this cemetery, which dates to 1850. Schlitz, Blatz and Pabst are among the brewing families here (Miller was Catholic, and is buried at Calvary Cemetery). During its early years, before the advent of the County Park System, Forest Home served as a popular picnic destination for the locals.

The Allen-Bradley clock, with its four 40-ft diameter faces, is the second largest in the world, being eclipsed in 2010 by a 140 foot diameter clock in Mecca. It has been ticking since 1962, and has been nicknamed “The Polish Moon,” for its role as a beacon for the neighborhood.