The Walker's Point bistro offers an ever-changing menu and a warm atmosphere.

On my first trip to Paris I ordered andouillette at an inconspicuous little corner bistro hidden in the Parisian depths. I had always been a little under informed about French cuisine, and thought I had perhaps stumbled across the ancient ancestor of the andouille sausage that we all love to throw into our gumbo and jambalaya in Louisiana. I couldn’t have been more wrong. I had ordered a fat sausage all right, but one made entirely of chitterlings. Coming from the Gulf South, I am no stranger to chitterlings, a staple on working folks’ tables down there, and I had never liked them, especially the way they are prepared in the South. But these were French chitterlings, and it was then when my French culinary world greatly expanded. That andouillette was rich and delicious. Leave it to the French to work miracles with offal!

I have since then made it a mission of sorts to seek out finely prepared organ meat if I think it might be done in a French style. I roll the dice and take a chance on one of the better (i.e., expensive) bottles of French wine offered there to with it.

So, there I was with my date at Prodigal Gastropub in Milwaukee’s Fifth Ward. When I saw sweetbreads with a quail’s egg on the menu for $13, I started looking for the expensive French wine because I was definitely getting the sweetbreads – I was going to celebrate them. They were, in fact, sweet and savory, magically paired with a very sweet, almost sour raspberry sauce. The $65 bottle of Le Crele sauvignon blanc was the perfect accompaniment. My date chose to start things off with the roasted beets for $12. Now, beets are beets and there’s just not a whole lot that can be done with them. But the creative addition of mock “soil” made from ground nuts, seeds and dried fruit, gave texture to the dish and provided contrast against the big chunks of beets dressed with fresh cucumber, pine nuts and chives. A unique beet treat for sure.

The wine also paired quite nicely with the beef-cheek poutine (pronounced “poo-teen”) for $16. So, with the rich, meaty bourbon gravy served over an enormous bed of thick-cut, perfectly crispy French fries and hearty hunks of Clock Shadow cheese curds, the menu took more of a French-Canadian turn with this north-woods specialty from Quebec. My date ordered the steak frites for $26 – another French classic featuring succulent steak medallions and, yes, more French fries (“frites” in French, short for “pommes frites” — and pronounced “pum-freet” — which means “fried potatoes”), expertly prepared by Chef Blaine Venturine. Having been trained by award-winning chefs, this came as no surprise.

And the wine went perfectly with all of it.

Despite Prodigal’s rather industrial-looking interior, it is as warm and inviting as the staff. With a full bar and ever-changing menu based on what’s available fresh locally, this would make an impressive spot to bring business associates for brunch, which is served between 10 a.m. and 3 p.m. The brunch menu has an interesting variety of items, like cured salmon with a quail’s egg, and shrimp and grits – getting away from French-Creole southern fare to lowland Southern cuisine. But the Elvis French Toast with nutella, bananas and bacon would be my first pick!

The other menu – the dinner menu from which I and my date selected our meals – is broken up into two categories, including daily specials: “Smaller” and “Larger.” They both feature other surprises, many of them vegetarian and/or gluten free: Fries and Duck Fat Aioli, Asparagus Salad with poached egg, Sea Scallops and the Prodigal burger (take off the bun and it’s gluten free). This place is an interesting addition to Milwaukee’s dining scene. 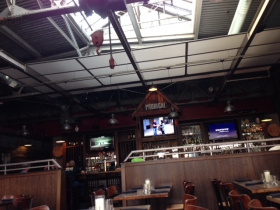 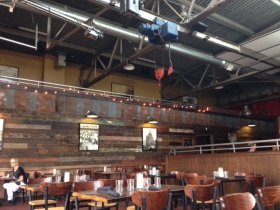 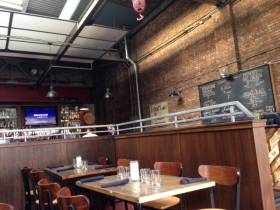 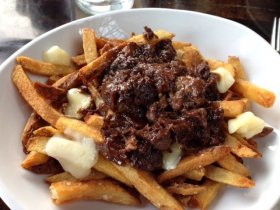 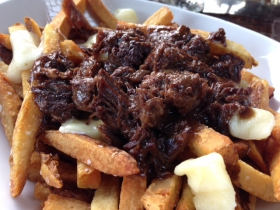 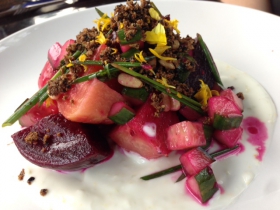 A simple gift from our close and friendly neighbor to the north, poutine is a warming, nurturing, north-woods, potatoes-and-gravy dish well suited for cold weather. Did you know that Canada’s second largest city, Montreal, Quebec, is the second largest, French-speaking city in the world (after Paris, France)?

Peel potatoes and slice into thick gougeons (that’s French for “fingers”) about ½” x ½” thick. Put the potato slices in a bowl of cold water until it turns milky (to get the starch out of them – about 20 minutes). Thoroughly pat them dry with paper towels.

Empty the cloudy water from the bowl and wipe it out dry. Return slices to bowl, drizzle well with olive oil and season with salt. Spread out in one layer onto a baking sheet. Bake for 30 minutes, then turn and bake until other side of fries is also crispy and nicely browned (about 10 minutes). Alternatively, you can of course always just heat up any commercially prepared brand of frozen French fries.

Heat up the gravy while the French fries cook. When everything’s cooked and warmed, plate the potatoes evenly onto two serving platters, scatter each plate-full of fried potatoes evenly with cheese curds and then ladle the gravy equally over each.