A year ago, I wrote a column suggesting Sheriff David Clarke’s cranky behavior had made his reelection less likely. And a week before the election I suggested the blitz of ads against him effectively attacked his questionable style. Boy, was I wrong.

In five suburbs in Milwaukee County — River Hills (which was filled with Clarke signs), Hales Corners, Franklin, Greendale and Whitefish Bay — there was a 200 percent jump in the number of people voting for sheriff, compared with the 2010 primary.

What drove this remarkable turnout? Clarke, of course, ran as a tough-on-crime sheriff and Moews took the bait, declaring that “Clarke is not tough on crime; he’s loud on crime. We need a real sheriff, not a fake cowboy.” And whoever was creating those third party advocacy ads by the liberal Greater Wisconsin Committee also fell into this trap, attacking Clarke for his radio ads suggesting residents rely on their own guns rather than calling 911.

The irony is that these five suburbs have almost no violent crime. And on those rare occasions when an incident of violent crime occurs, the Sheriff and his deputies are of no use. In a typical year, as I’ve reported, Clarke’s entire department handles less than one-fifth of one percent of all major crimes in the county. In a fully incorporated county like Milwaukee, the various local police departments handle all the crime.

Yet somehow this campaign became all about crime and gun control, with former New York Mayor Michael Bloomberg spending $150,000 to attack Clarke, and with the National Rifle Association defending Clarke. In a way, the campaign became one that was all about rhetoric, a battle over Clarke’s law and order homilies. It is the legislature that writes the laws on gun control, and Clarke’s opinions have had scant impact — he is one of innumerable sheriffs and police chiefs in the state — on how those laws have been fashioned.

As for those voters most likely to be affected by violent crime, city residents (where the Milwaukee police handle fully 75 percent of the county’s crime), their verdict was mixed. Clarke barely won the city, with just 50.4 percent of the Milwaukee vote, down from 57 percent in  2010. That’s a big drop, though it may partly reflect a high turnout in the race for the 19th Assembly District, whose mostly liberal residents are likely to oppose Clarke.

But offsetting that was the vote in predominantly African-American wards in Milwaukee. As Journal Sentinel reporter David Umhoefer concluded, Clarke won by a margin of more than 3,600 votes, just 1,000 less than Clarke’s entire countywide victory margin.”

Why? While it doesn’t hurt that Clarke is black, his views on most issues don’t go over well with African American voters. But an anonymously funded group called Citizens for Urban Justice, probably with Republican ties, (Republican Craig Peterson of Zigman, Joseph, Stephenson Inc made the ad buy) ran some slippery ads. They featured Monique Taylor, who introduced herself as a mother and community activist and recited the names of men who have died at the hands of Milwaukee police. “Now a lieutenant in that same police department wants to be our sheriff,” Taylor warned.

It’s a powerful pitch for a community outraged by the violent treatment of black suspects in custody, but of course there is no evidence connecting Moews to even one of these cases. The ads may have been the key factor in the race; for all the talk about the suburban turnout, much of Clarke’s margin came from his edge with black voters.

As for the ads by the Greater Wisconsin Committee, they did blast Clarke’s management of his department, when they weren’t going after his views on guns. But the tone of the ads, which mercilessly lampooned Clarke, were perhaps too gleeful. The sheer volume of the mailers and TV and radio ads also conveyed the feeling of anonymous forces (or outsiders like Bloomberg) trying to hijack the race and overthrow a local official. The ads overwhelmed Moews’ relatively low-key and serious approach, completely changing the tone of the campaign. They also greatly elevated interest in the race, helping conservative talk radio hosts Mark Belling and Charlie Sykes in their successful effort urging Republicans to vote in the Democratic primary and support Clarke.

So Clarke’s hot air won the day. We’ve reelected a cowboy, when what’s really needed is a good manager. The sheriff doesn’t investigate crimes, his job mostly involves managing facilities like the county jail and House of Corrections. And now Clarke will be all the more emboldened to run up overtime costs and ignore the budget passed by Milwaukee County Executive Chris Abele and the county board.

On crime and every other issue, the central problem facing Milwaukee is one of limited resources. The City of Milwaukee now devotes 100 percent of its property tax levy to public safety (police and fire), a percentage that has been rising steadily for 15 years as state shared revenue to Milwaukee has declined.  Milwaukee County devotes 22 percent of its budget to the Sheriff’s Department. So any efforts to keep taxes down must take these huge budgets into consideration.

At the city level, Milwaukee Police Chief Ed Flynn has been an excellent manager, slashing overtime costs that had been a continuing problem under prior police chiefs. And Abele, Mayor Tom Barrett and the 18 suburban police departments have all been willing to discuss ways to eliminate overlap and economize on how police are used. Only Clarke has been unwilling to consider such measures, even as he runs up overtime costs on his budget.

All of which would have provided some interesting and instructive issues to discuss, but this campaign was mostly about who gets to wear a cowboy hat. Clarke won.

Monique Taylor has also been involved with a group of black community activists who have discussed launching a recall effort against Milwaukee County District Attorney John Chisholm, and have strategized with conservative advocacy groups who oppose the John Doe probe of Scott Walker. This alliance of strange bedfellows has already put a scare into Chisholm, and clearly struck a crucial blow to help reelect Clarke. 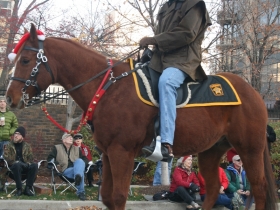 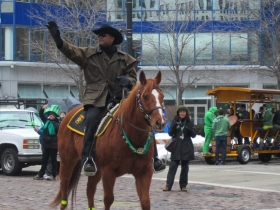 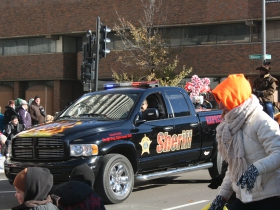 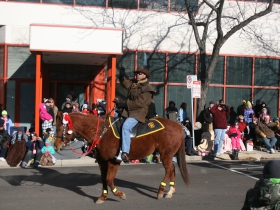 32 thoughts on “Murphy’s Law: The Remarkable Clout of Sheriff Clarke”