The Controversial Home of Mary Nohl

The 1925 bungalow and its trove of art is a place unlike any in the metro area and worth a visit -- before it gets torn down. 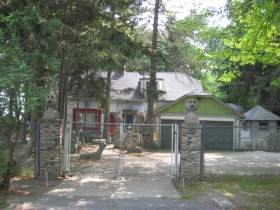 With this visit to the Village of Fox Point, House Confidential has its first posthumous honoree in artist Mary Nohl. Remarkably, this 1925 bungalow in one of the area’s wealthiest communities has the lowest valuation — $25,000 — of any house we’ve covered thus far.

Yet its 39,204 square foot lakefront lot is assessed at $654,200, which, at $16.68 per square foot, makes this the most valuable piece of land by that measurement we have encountered.

It is only the second House Confidential home to be listed on the National Register of Historic Places, with the other being the Tim Sullivan house, just a brief surf downshore in Whitefish Bay.

It is also the only House Confidential property to be listed on the Wisconsin Trust for Historic Preservation’s 10 Most Endangered Sites [2005].

In this small house with one bathroom and two bedrooms, Mary Nohl created an internationally recognized art environment. Although the sale of art brought her little money, her 2002 bequest of $9.6 million was the largest gift yet received by the Greater Milwaukee Foundation.

This mass of contradictions began innocently enough with a modest lakefront getaway built by Milwaukee attorney Leo Nohl and his wife Emma for themselves and their two children — Mary and Max.

Mary helped her father fashion stone entry pillars to the home. She had cement in her blood, and later topped off the pillars with busts, adding some 60 other concrete and found-object works to her yard over the next decades until her death in 2001.

In 1929, Leo Nohl took out a permit for 20 light outlets for his cottage. In 1940 he paid $7,000 for an addition including alterations to the old part of the house. The next year, he added 63 light outlets, 1 oil burner and 14 light fixtures to the home. It was certainly well-wired, but that oil burner was to remain for many years. In 1985 it was replaced by a Whirlpool forced air oil burning furnace. Remarkably, it was not until after her death that Mary Nohl’s home became heated by gas, sparing the oil delivery truck a harrowing drive down the bluff. More to add to the legend of the “outsider” artist: she never benefitted from gas heat!

All along Mary made her art and handled improvements to the home, a trend that accelerated after her father’s death and her mother’s removal to a nursing home in 1963.

With the home to herself, Nohl kicked her activities into full gear. In 1965 she decided to create a “dog enclosure” in her yard. Such an enclosure would also exclude the hoodlums and vandals who had perplexed her. These North Shore ruffians have never been identified. Some are presumably still in the upper class neighborhood where they can turn up their noses at plans to open the site of their vandalism to respectful art historians and cultural tourists.

In 1965 Nohl’s proposd colorful fence of fantastical creatures was presented to the Village for permits, leading to this communication from the village manager:

“The fence you propose to construct is quite different in appearance from the usual fence constructed in the village.

“I can understand the use of this type of fence on one’s property used mainly to enclose a small patio, but feel that it could be a distraction to the neighborhood if permitted along North Beach Drive.” 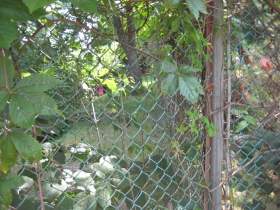 Someone has snuck in. Photo by Michael Horne.

Eventually, Nohl got her fence, but it proved vulnerable to vandals itself, and was replaced in 1975 by a rather unsightly $15,000 400’ x 200’ chain link fence separating the home from the road — as well as from lakefront access.

Upon Nohl’s death, the Kohler Foundation took control of the property and the art on the premises, along with decades of deferred maintenance — things like a new roof, and a modern furnace.

The foundation moved in a graduate student to inventory and examine the art and grounds. Neighbors reacted immediately as if this were a high-school keg party and bonfire down the street. The grad student was evicted and the foundation was enjoined from occupying the property. Floods in 2005 forced the reconstruction of the basement at a cost of $9,800. With the property unoccupiable, most of the art was removed to be stored by the John Michael Kohler Arts Center. Meanwhile, the talks continued with the village and neighbors to preserve the property and collection in situ and to permit limited public access to the property.

They went nowhere, and earlier this year the property’s owners, a Kohler affiliate known as Creation and Preservation Partners (CAPP), announced its plans to dismantle the house and art and move the whole works up to a to-be-determined location in Sheboygan, where the Kohlers own lots of lakefront property.

Under the original deed to the property, issued in 1996, the Kohler would not have been able to move the property. But this was amended in 2001 by Mary Nohl and she removed all restrictions related to transfer of ownership to Kohler Foundation, Inc, giving it the land, home and art without any restrictions. The foundation then gifted the Nohl property in October 2012 to CAPP, its affiliate.

In short, the Kohler and CAPP have full power to move the property and clearly intend to do so. Fox Point stands to lose one of its few attractions.

A recent visit, which all readers are urged to undertake themselves — preferably one per vehicle, in motorcades of 25 or more — gives us a glimpse of the doomed property.

The chain link fence is in fine condition, and provides a support for some vision-blocking Virginia Creepers. The lawn within and without the fence is well tended, and there is no litter on or near the property. Inside, the Nohl sculptures cavort and patrol as they always have, all rooted to their surroundings and at one with their environment.

The old garage is decorated with cut-plywood bas relief, painted chartreuse. It is visible right behind the padlocked gate with its National Register and Milwaukee County landmark recognitions. The front door is bright red, and a picture window is similarly framed. One of the entry pillars in incised with “Nohl.” It shows the slightest small cracks — but with time and neglect these will grow. A little shed to the west of the garage is decorated with cutout figures, possibly from the 1965 fence, as is a gate nearby. 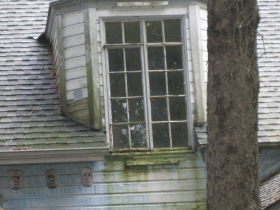 This dormer is in need of repairs. Photo by Michael Horne.

Although the roof is a recent Kohler improvement, two dormers visible on the second floor show wear and deterioration, including mossy deposits dripping below. The vignette is more French Quarter than Fox Point.

This lovely environment could never be reproduced or duplicated. Its new home in Sheboygan can never match its current one, tucked beside a bluff, at the end of a winding lakefront lane. So it is the duty of House Confidential readers to take as many trips to slumbering Beach Drive as they can to inspect this remarkable sight before it sails away forever. And let the sculptures in the yard be a warning to whoever buys this property and expects to build a home on it without disturbing the spirits dwelling here: that will be a tough order to fill. 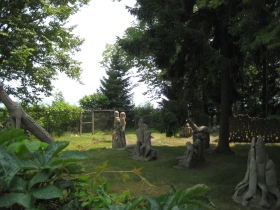 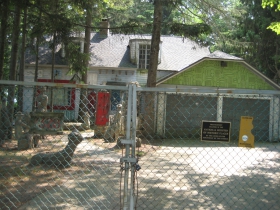 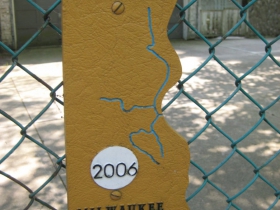 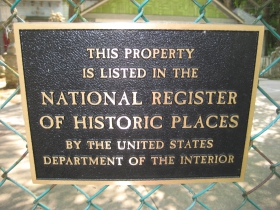 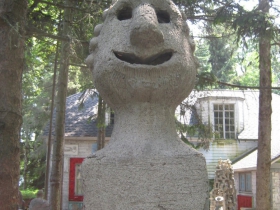 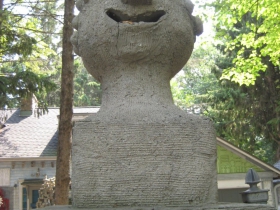 Correction: An earlier version of this story incorrectly reported that the Greater Milwaukee Foundation would gain ownership of the Nohl house and property if the home was dismantled. As noted in our corrected story, the 2001 legal change gave all power over the house and land to the Kohler Foundation.

4 thoughts on “House Confidential: The Controversial Home of Mary Nohl”