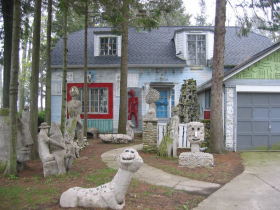 Between downtown Milwaukee and downtown Port Washington, a distance of about 30 miles, all lakefront buildings are perched high on a bluff bordering Lake Michigan. The only exception is Beach Drive, a mile or so of highly desirable Fox Point real estate located on a narrow patch of land that is just a few feet above the lake.

There, we would be happy to leave the 75 or so homes to their splendid isolation, were it not for the fact that one of the properties there is among the most significant historic and cultural sites in the region.

That property is the former home of artist and philanthropist Mary Nohl, who died in 2001 at 87. It is a state and nationally registered historic place and a Milwaukee County landmark. With its fantastical sculptures and other decoration, the home is one of the nation’s premier site-specific art locations. The location, the home, the artist and the art are all one, and you can’t forgive its owner, the $50 million-in-assets John Michael Kohler Art Foundation, for hoping to get approval to open the home on a limited basis to “honor Mary Nohl’s desire for her work to be preserved and enjoyed by others after her death.”

Toward that end, the Sheboygan-based John Michael Kohler Art Center did its best to invite neighbors on Thursday, October, 17th to a presentation of its plans for what it calls the Mary Nohl Lakeside Art Environment.

“The Arts Center has been involved in the preservation of artist-created environments around the country for more than 40 years,” attendees were informed.

“Today, the Arts Center is the world’s leading center for research and presentation of this important and unique art form.”

The Kohler’s proposal is simple enough. It asks for a “Cultural Overlay District Zoning” to permit limited operation of the site despite the single-family zoning in the neighborhood that has caused the site to be idle for years, right up to this day.

The center would like to remove the ugly chain link fence that surrounds the property, and replace it with an iron fence, amply landscaped. It asks to remodel the home — one of the few remaining lake cottages in the area — and to create a few parking spaces, also lushly landscaped, to the west of the property. The home would be open on a limited basis “by both size and days of the week.”

Groups would be accepted on an advance-basis reservation system, including scholarly symposia and small member fundraiser events. Visitors would be shuttled to the site, which is to be “NOT open to passers-by.” [Emphasis original.] The center would continue a $17,000 annual payment to the village in lieu of property tax.

You’d think that 99 per cent of people might enjoy having a nationally recognized cultural destination nearby, but this is east-of-Lake Drive Fox Point, home of the one-percenters. And they aren’t buying it, according to one attendee who spoke to Urban Milwaukee off the record.

“When they mentioned shuttle buses, you could hear a groan go through the audience,” the observer said. “People voiced concerns that the visitors would harm the neighborhood, bring an undesirable element, and things like that.

“They even complained that as things stand people already drive on this public road just to look at the lake!”

Some suggested the collection simply be hauled over to the Milwaukee Art Museum, which now houses the Chipstone Foundation Collection of decorative arts, another Fox Point institution that failed to gain village approval to operate as a museum. Chipstone, located just up the bluff from the Nohl site, has also tried to get village approval to host visiting scholars on its 8-acre property.

With a different mentality from its residents and political leaders, Fox Point could turn Nohl and Chipstone into worthy destinations for limited tourism. Fox Point is also the home to Doctors Park, and is just south of the Schlitz Audubon Nature Center, another east-of-Lake Drive institution that has managed, over initial neighborhood objections, to permit visitors to its site without the world ending.

A couple miles to the west of the Audubon Center, and also on Brown Deer Road, but in the Village of River Hills, lies the Lynden Sculpture Garden.

Lynden was the home of philanthropist Peg Bradley, and is owned by the $25 million-in-assets Bradley Family Foundation. For years it was opened to the public only one day a year (mostly to preserve its tax-exempt status), but recently it has embarked on an ambitious program of public events on its beautifully landscaped 40 acres.

Wouldn’t it be something if the folks on the North Shore spent less time worrying about outsiders and more time encouraging visitors to explore this attractive area and its significant cultural attractions?

A shuttle bus full of art aficionados would be a welcome addition to the restaurants in the area, for example. Why even the Town Club might open its doors for an after-tour luncheon.

Although Mary Nohl left her home to Kohler, her $10 million estate was left to the Greater Milwaukee Foundation, which funds the prestigious Mary Nohl Fellowships awarded each year to established and emerging artists.

The fellowships are administered by the Bradley Family Foundation. Six judges from around the country who will select the 7 fellows will appear this evening, Wednesday, October 23rd, at 6 p.m. to tell the public about their interests and home cultural institutions. The public is invited to the event at the UWM Inova/Kenilworth gallery, 2155 N. Prospect Ave. 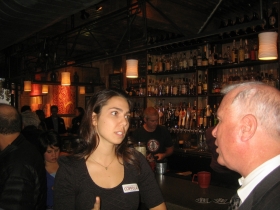 The resignation of Rep. Mark Honadel [R-21st] has left an empty seat in the assembly which the Democrats hope to fill with their candidate, 29-year old Elizabeth Coppola. She is to face Jessie Rodriguez, who, on Tuesday, October 23rd, won a 5-way primary to challenge her in the special general election to be held Tuesday, November 19th.

While the Republicans were battling it out Tuesday evening, Coppola held a fundraiser at the Riverwest Filling Station, 701 E. Keefe Ave.

“This is the first race of the 2014 election cycle,” said Sen. Chris Larson, whose district includes the 21st assembly seat, and who is the head of Senate Democrats.

“If we are going to win the governor’s mansion next year, it begins here,” he told the group of 40 or so supporters, including Rep. Josh Zepnick, Rep. Evan Goyke, House Confidential Honoree Rep. Jon Richards, Sen. Nikiya Harris, and others, including former Rep. Sheldon Wasserman, who is still keeping his hand in the game.

Larson said the Republican candidates “overstate how much power they have and how great their mandate is.”

Obama carried the district in 2008, with a bit more than 50% of the vote but lost to Romney in 2012 51% to 48% in the redistricted district, which now includes the City of Oak Creek, the City of South Milwaukee, and a tiny bit of the City of Franklin.

The Democrats are paying close attention to the race as an early referendum not only of their chances to win the governorship in 2014, but also as a test to see if the Republicans have lost support due to the recent federal shutdown.

“The Republicans have been polling terribly,” Larson said. It is his hope that the Tea Party-sponsored shutdown will be fresh in voters’ minds when they go to the polls “in four weeks and two hours.”

Goyke took the podium for a few words, saying “Tonight we find out who we’re going to beat. There is great dissension in Republican ranks, and I would love to see [Speaker] Robin Vos’s face Wednesday morning after we elect Elizabeth Coppola to the Assembly.”

Coppola said, “they didn’t tell me I would be this poster child when I signed up for this.”

She alluded to her youth, saying voters asked her if she were old enough to vote.

She also explained her motivation to run for public office.

“If people don’t step up for these positions then the Scott Walkers win. Don’t be surprised if I call you in two weeks and ask you for twice what I already have,” she mock-cautioned the deep-pocketed guests, who included Ross Draegert and Robert Starshak, a Fox Point couple who recently married. Democratic activist Eric Couto was in attendance, as was Dr. Tatiana Joseph, a new Milwaukee Public Schools board member. Judicial candidate Laura Gramling Perez also made an appearance, as she has been doing everywhere lately.

Coppola, of South Milwaukee works for United Way in Milwaukee, and recently resigned as a member of the board of the Social Development Commission to run for the seat. On the SDC, she represented the Third District, which does not include South Milwaukee, so it appears she moved [or plans to by inauguration day] to make this race.

She is a graduate of Alverno College, which is where she had her political awakening when she learned in class “how few women actually run for office,” she told a reporter. Emboldened, she joined Emerge Wisconsin, an affiliate of a national organization that recruits women candidates, and graduated in the class of 2011. Nationally, 56 percent of Emerge graduates have run for elective office, 59 percent of them successfully.

Is Coppola up to the battle against the first Latina candidate yet fielded by state Republicans in this swingy district?

“I grew up in a family of seven and I know how to fight,” she said.

At the Elizabeth Coppola event, Milwaukee County Board of Supervisors Chair, and former House Confidential Honoree Marina Dimitrijevic was asked if she plans to run for the 19th assembly district seat vacated by Jon Richards, who is running for Attorney General.

“Right now I am concentrating on the County budget,” she said. Asked if he has any idea who might run to replace him, Richards said he expects a large number of candidates will file for the primary, which is 10 months away.