The Biggest Lobbyists in the State

By Bill Lueders, Wisconsin Center for Investigative Journalism - Aug 6th, 2014 09:39 am
Get a daily rundown of the top stories on Urban Milwaukee

In the first six months of this year, Wisconsin’s 700-plus registered lobby groups collectively invested $14.1 million trying to shape state law or policy, according to new filings with the state Government Accountability Board. 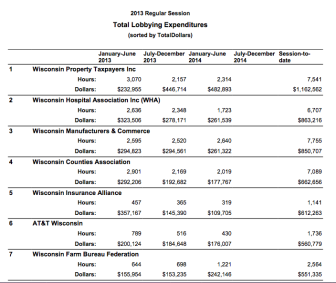 The top results from the first half of 2014. Click image to enlarge.

That’s actually down a bit from 2013, when spending in the first and second halves of the year totaled $17 million and $14.8 million, respectively. Lobby outlays tend to run higher in odd-numbered years, when the two-year legislative session is young and the budget is in play.

That makes it the state’s highest-spending lobby group for the second consecutive reporting period — and the top spender in first three-quarters of the 2013-14 session, at nearly $1.2 million.

Michael Birkley, the group’s legislative director and sole registered lobbyist, received $31,200 for 938 hours of lobbying. Most of WPT’s total went to “non-lobbyist employees” — eight field workers whose discussions with people around the state about legislation are counted as a lobbying expense.

Birkley says his group’s “principal lobbying effort” is its ongoing push to eliminate the personal (as opposed to real estate) property tax. He reckons the tax, paid by businesses on non-exempt equipment, accounts for about 2 percent of total property tax collections.

A bill to kill the tax was introduced on April 3, the last day of the session’s last floor period, and promptly died. Its lone sponsor, Mary Williams, R-Medford, is not seeking re-election.

WPT is also working to end local technical college taxes, shifting this burden to the state, and protect use-based assessments of agricultural land, which is important to the farmers who make up about two-thirds of its 18,500 membership.

Another top player was Wisconsin Manufacturers & Commerce, which spent $261,322 on 2,640 hours of lobbying activity in 2014. The group has registered an interest in more than 100 bills and dozens of topic areas.

In 2014, WMC favored a successful bill to ease the requirement that electric utilities boost their use of renewable energy, and opposed failed bills to hike the state minimum wage and increase state monitoring of frac sand operations.

Meanwhile, the Wisconsin Hospital Association spent $261,539 on 1,723 hours of lobbying. A third of this went to help defeat a proposal to cap what health-care providers can charge for services under worker’s compensation. That bill spurred dozens of groups to lobby an astonishing 2,868 hours, 59 percent by opponents.

A final fun finding: The lobby group General Motors LLC has in recent years paid around $36,000 every reporting period to the law firm of Foley & Lardner, regardless of how much lobbying it does. Such retainer agreements are common.

A Foley & Lardner lobbyist declined comment, saying “We report what’s required by GAB and that’s all.”