A Socialist for Sheriff 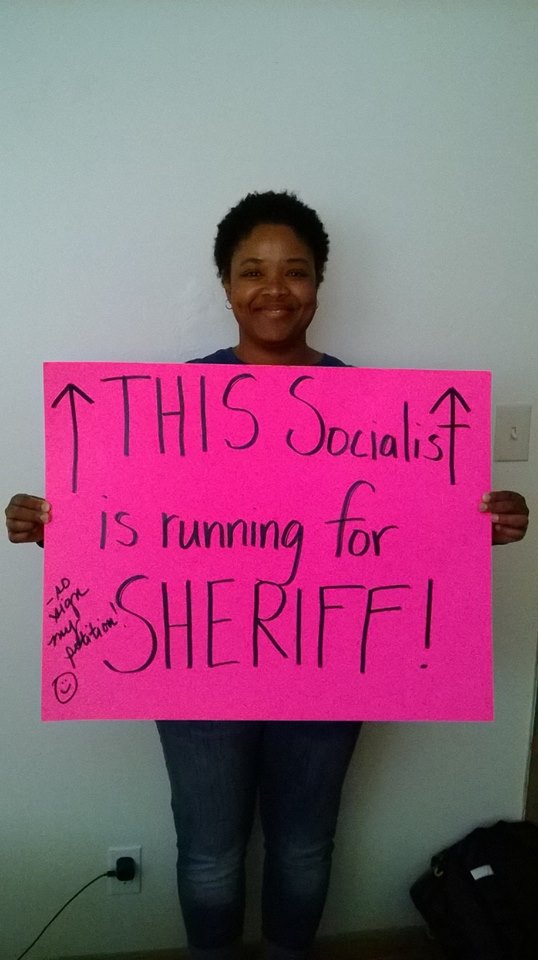 Milwaukee Police Department Lieutenant Chris Moews is challenging Sheriff David Clarke, the controversial 12-year incumbent, for the Democratic nomination this August. But Clarke has another challenger, Angela Nicole Walker, who is running as a Socialist candidate and will be on the ballot in the November general election. Having been inspired by recent victories like Socialist Kshama Sawant’s election to the Seattle City Council, Walker decided to run.

Angela Nicole Walker was born in Milwaukee in 1974 and raised on the North Side.  She attended Milwaukee Public Schools and  was involved in the theater program — which was a key influence — graduating from Bay View High School before attending the University of North Florida for history. She stayed in the south for 15 years, living in Florida, Georgia and North Carolina before returning home to Milwaukee. “I went to the south to find my fortune and came back because I missed my family,” she says.

In Milwaukee, Walker lives near her daughter Epiphany and two grandchildren, Jayanni and Armani. A self-described bookworm, Walker says there are few things she would rather be doing. She also believes it’s her duty to be politically conscious and fight for social justice causes. Black history and empowerment were emphasized by her family when she was growing up and Walker says teachers strengthened these views while in high school. She became politicized by the ideas of racial justice and the oppression of women.

While living in the South, Walker participated in the historic 2000 presidential recount in Florida that eventually led to George W. Bush’s election. Walker was also active in the anti-war scene, attending many rallies to demand an end to the war in Iraq. After returning to Milwaukee, Walker was a driver with Milwaukee County Transit for four years, became active in her union, ATU local 998, and served as its legislative director and lobbyist for two years.  She was also involved in Occupy the Hood and the Occupy Coalition in Milwaukee, groups fighting for various social justice issues. She says she continues to be inspired by her family, local activists and well-known authors; people who stand up for what they believe in inspire her daily, Walker says.

Urban Milwaukee recently had the chance to ask Walker about her background and campaign for Sheriff.

Why are you running?

Because I believe the Sheriff’s Office is in a unique place to address social justice issues. A friend of mine who is a Socialist ran the idea past me, and I thought it over for a few days. He said that Socialists are in a good position to change the political discussion, as shown by the election of Kshama Sawant in Seattle. Milwaukee County needs a lot of love right now, and I think we can give that need a platform.

What is your law enforcement background?

I have zero law enforcement experience; my major in college was history. I realize that for a lot of people, the lack of law enforcement background may be an issue. I think that it’s helpful, because I am not a part of the system here and not influenced by law enforcement culture in this county. I can approach the position of sheriff from a different perspective.

What do you think the relationship should be between the Milwaukee Police Department and the Sheriff’s department?

How do you think gun violence should be addressed?

I firmly believe that poverty is violence, and that the gun violence and crime we see on our streets is the outcome of poverty. If we want to honestly address crime in Milwaukee, we need to look at the limitations placed on people in the most affected areas here. We absolutely need living-wage jobs, and healthy transit to get people to and from their jobs. We need progressive mental health treatment and drug and alcohol treatment that is dignified and available to anyone who needs it. We need to stop incarcerating people for drug possession, and look at addiction not as a criminal offense, but a matter of public health. People need safe and decent housing.

A lot of people have internalized the message sent from people outside of the North Side of Milwaukee: that folks on the North Side are inherently violent and that the conditions that create violence are the fault of the people who live there. It isn’t true. When you defund public schools and deny access to living-wage work (the loss of Talgo is one example), when you have absentee landlords who are not accountable to the tenants for the conditions of their properties and banks that overcharge folks for their homes, when you have food deserts and inadequate healthcare and inadequate transit… and fueling all of this is the pervasive racism that has existed in this city for over a hundred years…you have all these things and violence is what you get. Recognizing what is happening in the Inner City has to happen if we are going to change things. I think the Sheriff’s Office can help work for positive social change, under a sheriff who understands how corrupt and damaging capitalism is, and how it manifests itself in our current “criminal justice” system and on our streets.

What do you think are the most important issues impacting Milwaukee?

I think that the biggest challenges facing Milwaukee are poverty, defunding of public schools, inadequate transit, long-entrenched policies that incarcerate black men at twelve times the national rate, and a complete lack of living wage jobs. All these things are by design; racism has long played a role in making a permanent underclass of the inner city. Milwaukee is one of the most segregated cities in the country, and until all people here decide to work as a united community, nothing will change. The Sheriff’s Office, by partnering with community organizations such as MICAH (Milwaukee Inner-city Congregations Allied for Hope) who run the 11×15 Project which works to end mass incarceration, and other community organizations, can rebuild trust and help strengthen the community in a very tangible way.

What does mass incarceration mean to you?

The imprisoning of unconscionable amounts of people, primarily black and Latino men, although the numbers of black and Latina women in the system are increasing. It’s keeping people in prison who are eligible for parole, and should be free. It’s making crimes that were misdemeanors into felonies, and locking up people for nonviolent marijuana offenses. It’s known that incarcerating people is profitable in numerous ways, including the furnishing of pretty near slave labor. There are not enough resources to help people who are incarcerated be productive and move forward with their lives upon release. I support the legalization of marijuana, with the same restrictions as alcohol, as one way to address mass incarceration. Freeing nonviolent marijuana offenders allows the system to focus on people who are truly dangerous and in need of incarceration. Keeping people at home in their communities and working where they can, is better for everyone.

Do you think the Sheriff’s office should be involved in immigration enforcement, such as the immigrations raids at workplaces and the county courthouse?

It’s my understanding the Sheriff’s Office has the discretion to assist Immigration and Customs Enforcement (ICE) in raids and arrests. There was a resolution passed in 2012 by the Milwaukee County Board that adds Milwaukee to a list of municipalities that don’t want their local resources misused by racially profiling and detaining innocent people. I would, as sheriff, invoke the ICE Detainer Limitations, which only involve deputies when there is a specific warrant targeting a specific individual. Random sweeps of immigrant communities do not inspire trust and cooperation within the community, and the Sheriff’s Office has the leeway to not comply with ICE. I would invoke that. And there are precedents in other localities where the sheriff has not assisted in bank foreclosures of people’s homes. I would be interested in building on those precedents here.

You can find more information about Angela Nicole Walker on her Facebook page.

10 thoughts on “A Socialist for Sheriff”