The Deconstruction of Northwestern Mutual

Last year at this time, a largely anonymous office building anchored the east end of E. Mason St. With a granite facade, the offices certainly had incredible views of the some of Wisconsin’s best architecture, the Milwaukee Art Museum, the U.S. Bank Center, Discovery World, much of E. Wisconsin Ave. Those buildings, however, didn’t get much back from the modernist building at the end of the street. But fret not, because now it’s nearly gone.

The 1979 office building, known internally at Northwestern Mutual as the East Building, was as generic as its name suggests. Designed by legendary designer Der Scott, the building has been called one of Milwaukee’s modernist gems by Journal Sentinel architecture critic Mary Louise Schumacher. I personally won’t miss it, as I found the fountains wonderful, but the building itself poorly suited for its prominent location.

And for the insurance giant’s needs, it was also outdated and in need of substantial repair. Rising in its place will be the new Northwestern Mutual Tower, a project that will keep Friday Photos busy until at least 2018. Designed by the Pickard Chilton architecture firm, the tower will be the second-tallest building in the state (32 stories) and the biggest in the city (1.1 million square-feet).

Of the East Building’s 16 stories, only three now remain. The deconstruction of the 452,000 square-foot building, which is being led by Veit, seeks to recycle or re-use as much of the building as possible. It’s one of those cases where what’s good for the environment is also good for the pocket book. The building is being pulled apart floor-by-floor, with a target of over 75 percent of the materials avoiding the landfill. Its more-then 5,000 granite panels are being donated to various groups. Steel and other metals are being recycled. Glass panels are being used for various projects.

‘There’s 19 million pounds of steel,’ says Wollenzein. ‘All of that material is going to come down and get melted down and made into something else. The copper, the aluminum, the iron piping, you name it, all of that stuff basically comes out, gets recycled in some form.'”

That’s a lot of materials that aren’t going to the landfill.

See our photos from January to notice the dramatic change in just a few months. Also, make sure to stop by to pay your respects before it’s too late. The “brown building” will exist only in photos and recycling bins come the end of June. 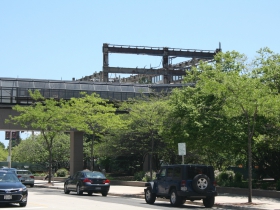 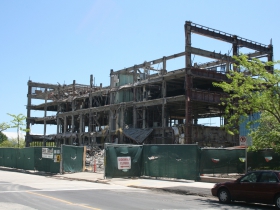 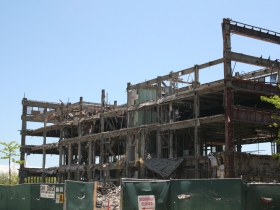 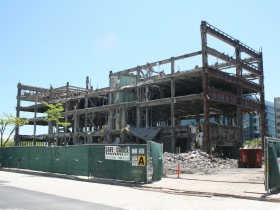 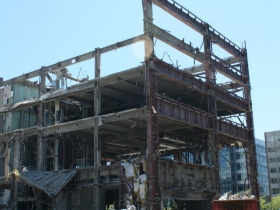 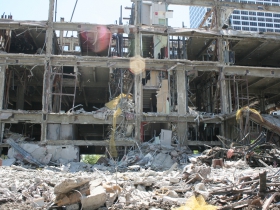 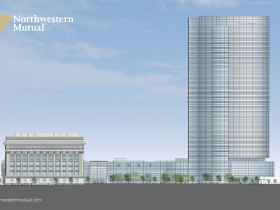 2 thoughts on “Friday Photos: The Deconstruction of Northwestern Mutual”