Walk a Mile in the Mayor’s Shoes

Barrett wants residents to join him in walking 100 miles in 100 days. 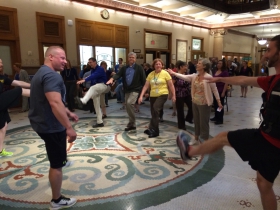 Warming up. Photo by Jeramey Jannene.

Mayor Tom Barrett kicked off the first day of his new walking program in City Hall today, declaring this would be the “start of a great one hundred days.”

Barrett’s “Plan for a Healthier Milwaukee” urges all city residents to join him in walking one mile per day for the next one hundred days, though he’d probably be fine with the idea of suburban residents joining in the fun.The plan is a response to recent reports which found that less than one half of Milwaukee residents are getting their required daily exercise.

The documented health benefits of exercise are by now well-known. Barrett offered a new slogan of sorts — “sitting is the new smoking” — from a standing position, we should note, and advised against the horrors of a sedentary lifestyle.  Though he noted that everyone exercises “for different reasons,” he offered his own: the desire to fight middle age and to remain healthy and active. Those goals were probably also furthered by the mayor’s promotion of and participation in “Bike to Work Week,” which we’ve previously documented.

The Mayor has partnered with Gold’s Gym for his 100 mile plan, and representatives were on hand to warm up the crowd before they began their walk.  Everyone gamely followed the leaders in toe touches, windmills, and knee hugs, looking excited and anything but sedentary. Fruit and water bottles were also available free of charge to the group of roughly 20 people. Due to the rainy weather, the walk was redirected to the inside of City Hall, but this certainly did not deter those in attendance, as they circled around the eighth floor of the building to get in the first of their 100 miles.

Mayor Barrett concluded by inviting those present to either join him and his Walk Captains on the community walks they will be hosting throughout the summer, or to form their own walking groups.  He encouraged everyone to go to the website www.milwaukee.gov/walk100 to register and track their miles. In three months, you’ll be a new person.