Biking With The Mayors 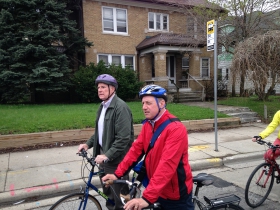 The Mayors. Photo by Dave Reid.

Monday was the start of the 2014 Bike to Work Week and as usual Mayor Tom Barrett got things started with his group bike ride. The route takes riders from his neighborhood, Washington Heights, to the Frank P. Zeidler Municipal Building, 841 N. Broadway, in downtown Milwaukee.

The crowd gathered at the corner of N. 51st St. and Washington Blvd and awaited the mayor’s arrival. Numerous bike enthusiasts and advocates as well as local politicians and city staffers joined the ride, including: Keith Holt, Dave Steele, Dave Schlabowske, aka the Bike Czar, city engineer Jeff Polenski, Michael Loughran, Bunky Miller, Pat Murphy, Ald. Nik Kovac, and former Madison Mayor Dave Cieslewicz, who now serves at executive director of the Bicycle Federation of Wisconsin. Cieslewicz fired up the riders, kidding that with just a chance of rain a similar ride was cancelled in Madison, while here in Milwaukee the threat of rain didn’t deter this hardy crowd from riding to work.

Along the way the ride had support from the mayor’s security staff and members of the Milwaukee Police Department.  So much support that at a couple of intersections the group received a “mayoral corking,” by MPD (Corking is a bike term for blocking an intersection to allow a group ride to get through the light).

Last year, Barrett rode one of Trek’s B-cycle bikes to promote a future rollout of bike-sharing in Milwaukee.

During the post-ride press conference Barrett noted that the city has a $1.6 million CMAQ grant for the proposed bike-sharing system, but he stated that it won’t be rolling out until 2015, rather than this summer as had been previously reported. Despite the delay, Barrett told the crowd, bike-sharing “is on its way.”

UPDATE May 13 10:26 pm: It turns out we won’t have to wait till 2015 for more bike sharing. Kevin Hardman, of Midwest Bikeshare, Inc., in an email to Urban Milwaukee wrote, “We’re hoping to get 5-10 additional stations on the ground this summer. These stations are not CMAQ-funded but will use other sources we’ve raised.”

Photos from the Ride 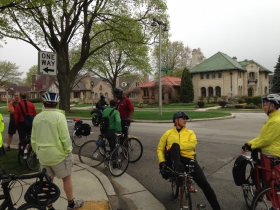 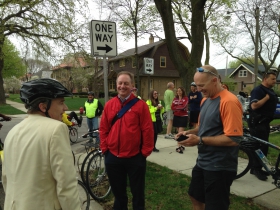 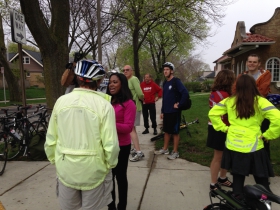 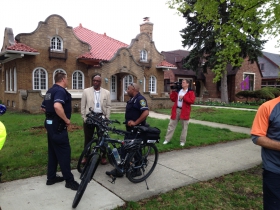 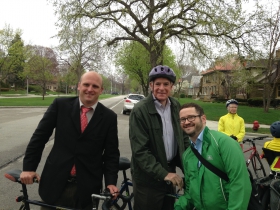 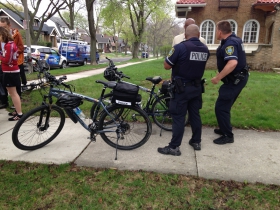 Other Bike to Work Week Events

For some of us it is always Bike to Work Week, but if you haven’t tried yet, it’s time to get the bike out of the garage. Here are just a few of the fun events left to take in this week:

3 thoughts on “Eyes on Milwaukee: Biking With The Mayors”