Its history goes back to 1879, when it was the Western Union telegraph office. 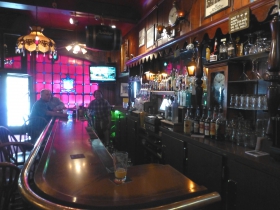 Every tavern has its regulars.

At the Swingin’ Door Exchange (219 E. Michigan St.), it seems that many of the regulars are tavern owners themselves. This is considered a good sign. Guys like Libby, Pitch, Slim, Fitz, Rob have been coming to the “Door” for decades, and this is just one of the things that has not changed since husband-and-wife team K. C. Swan and Shelley Sincere bought the place from longtime operator Michael T. Murphy in September 2010.

With its wood paneled walls and stained-glass accents, the interior of the tavern/restaurant in the 1879 Mackie Building evokes another era without wearing its history on its sleeve. The decor includes leftover stuff from the Murphy era, including a wood-engraved sign reading “Swingin’ Door Cocktail Lounge + Plush Restaurant,” and a placard for “Jacob Best Premium Light on Tap,” from way back when such a product existed, and this place served it.

A wooden barrel for “Andeker of America the BEER Supreme” is suspended by chains from the ceiling above the L-shaped bar with its dozen Windsor-back, swivel stools. A little 3-D Pabst man motors away in a miniature display where “Milwaukee Feeds and Supplies the World.”

Some things never change, like the television that has been tuned to MSNBC since the end of the last century, when watching stock returns rivaled sports as a tavern diversion, and guys from the brokerages would come by for a snort after or even during work. Sports is on the other television here. 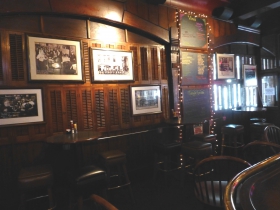 Inside the Swingin’ Door. Photo by Brett Kihlmire.

Being abreast of financial news is part of the heritage of the tavern’s patrons, a lineage that extends generations. On the east wall is a photo dated April 22nd, 1933 showing the same room, with the same paneling, at the “Grand Opening Party Members Grain Exchange, Exchange Tavern Dave Schuster, Mgr.” The photo shows a full house (all but one men) celebrating the 3.2 percent alcohol beer that had just been made legal that month. For a “Grand Opening,” the tavern already looks rather worn, and there were probably more powerful beverages than 3.2 beer behind the bar.

On April 22nd, 2008, 75 years after the original photograph was taken, the scene was reshot by Dave Bernacchi, a professional photographer who also tends bar at the saloon. Then-owner Murphy is in the forefront, while others in the group include this writer, Eric von Munz, and future tavern owner K. C. Swan. That photo also hangs on the wall.

The Grain Exchange members enjoying their end-of-prohibition drinks were the middlemen in the process by which Milwaukee fed and supplied the world. The trading work was carried on in a room upstairs which has since been restored to its original magnificence as one of the most sumptuously decorated surviving 19th century commercial interiors, and serves as an event space today operated by the Bartolotta Group. 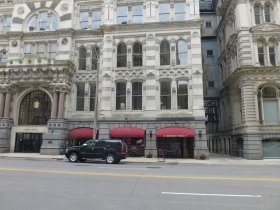 At the time the Edward Townsend Mix-designed Chamber of Commerce building was erected in 1879, Milwaukee was the center of global grain production and trade. It was able to conduct this commerce shortly after the Civil War thanks in part to the transcontinental telegraph cable which lies right outside the door, and the stock ticker, invented by Western Union in 1869. The Western Union telegraph office at the site predated the current building and continued operating from the site while the new building was being constructed.

It was while what is now the Swingin’ Door served as the Western Union office that young Edward Steichen showed up one day and suggested to the manager that he could deliver more telegraphs faster on his new safety bicycle than the current runners could.

Steichen’s offer was accepted, and the bicycle messenger industry in the United States of America was born on this spot. Within a year, Western Union employed dozens of young men as messengers in Milwaukee and hundreds more nationwide. Steichen went on to become one of the most prominent photographers in the world. His originals command millions of dollars.

An 1894 photograph of the messengers standing with their bicycles outside their office is another item of the decor that hasn’t changed since K.C. and Shelley bought the place. In 2007 that photograph was re-shot, with then-current bicycle messengers recreating the pose in front of the Swingin’ Door, which happens to be a popular spot with the messengers. It has been the site of a monthly alley-cat bicycle race on the First Friday for over a decade. That photo hangs on the wall as well.

Part of the reason for the popularity of the bar with the lithe bicyclists might be the ready availability of Pabst Blue Ribbon Beer — the Swingin’ Door sells them every day priced at three cans for $5. 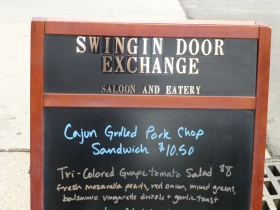 One thing that has changed here is the menu. The bar had for decades offered sandwiches and blue plate specials rotating daily, but K.C. and Shelley ramped up the selection considerably, based on their experience at O’Lydia’s where they had worked previously. The menu includes seared tuna, sliders, mussels, tacos, crab, soups-of-the-day and a very popular fish fry. A featured side dish is vermouth carrots, and the salads are artfully composed. A favorable December 2010 review by Jeff Beutner (who does the Yesterday’s Milwaukee column for Urban Milwaukee) hangs on the north wall, one of the few new things mounted in the tavern. Food is served at the bar, or at any of four round tables, or seven tables with chairs facing bench seating in a rear dining area. The wait staff does an admirable job juggling plates from the kitchen through the tavern area during busy times.

Another change is an upgrade to the beverage menu. Shelley likes wine, and there are usually a number of white and red wines by the glass featured on the blackboard, with others available from a list. A Restivo Malbec was the featured red at $8 per glass or $29 a bottle. The drink list also includes three hard ciders, which should be enough, along with 19 canned and bottled beers. There are seven tap beers, including Riverwest Stein Beer and Lagunitas IPA which is served in those ridiculous Mason jars unless requested otherwise.

The tavern has five gaming machines “for amusement only,” and has a well-worn dice cup. This is definitely a bar to go to if you want to get your shake on. Music is at the bartender’s discretion, and ranges from ‘60’s pop to the Grateful Dead to beyond. Around 5 o’clock or so the tavern features free snacks including pretzels, cheese, the occasional meatball, and the house-made potato chips.

The outdoor tables are popular during warm months; the view of the surrounding 19th century buildings provides a historic perspective on the city and its development; Solomon Juneau’s cabin was on the corner at N. Water St. In a year or so, the streetcar will stop at the corner of E. Michigan St. and N. Broadway. You can survey the city’s entire history from a stool at this historic spot. 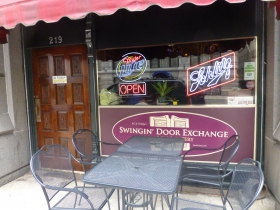 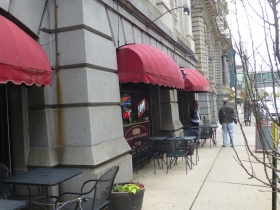 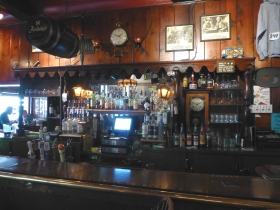 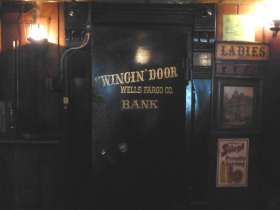 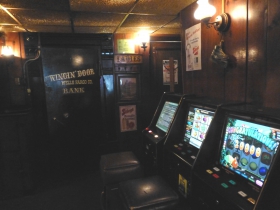 One thought on “Taverns: Swingin’ Door a Downtown Classic”