Life at the Corner Stores

There are more than 300 in the city, and they are often the lifeblood of their neighborhoods.

By Brendan O’Brien, Milwaukee Neighborhood News Service - Apr 25th, 2014 11:09 am
Get a daily rundown of the top stories on Urban Milwaukee 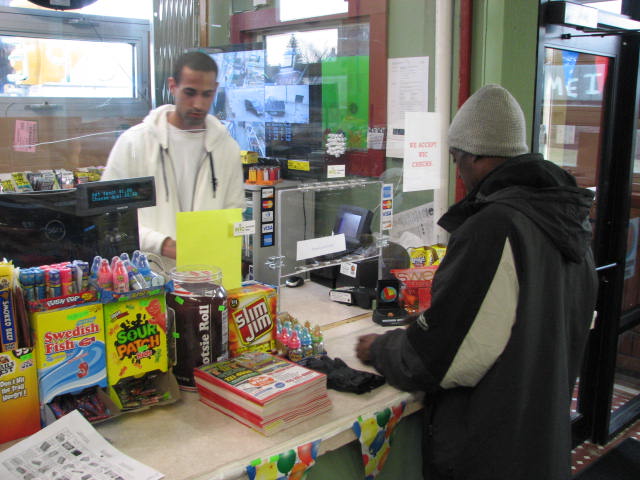 Arshpreet Natt helps a customer at Natt Groceries, 401 N. 35th St., a store he owns with his father Jaswinder. (Photo by Brendan O’Brien)

A composition notebook sat closed among office supplies, bills and receipts on a counter behind a Plexiglas partition.

A gaggle of men mingled in the front of the bustling corner store, their dreams and fortunes delicately hung on each scratch they made with a coin on the lottery tickets they had just purchased.

The storeowner walked up to the notebook, flipped it open and placed his index finger on a random page filled with rows of names and dollar amounts.

“Before last year, two years ago, they came to pay their bill, but now they have to pay their gas bill, their light bill first,” he said, moving his finger down the page. “It’s sad. It’s very sad.”

Page after page are filled with small IOUs owed to City Spirits and Liquor, 1535 W. North Ave., in the Lindsay Heights neighborhood by some of its patrons. Although many of the names and amounts are scratched over, representing unpaid debts that he has given up on, the owner feels he must continue to offer credit.

“When my kids eat at home and I come here and the poor can’t eat at home, how else can I feel? That’s the reason I do it,” said the owner, who did not want his name published. “We have to be involved in our community.”

According to city records and online phone listings, there are more than 300 corner stores in Milwaukee, many of which are a microcosm of the social and economic norms of their impoverished neighborhoods.

The first sign of this are the structures themselves. Many of the stores are located in dingy buildings with peeling paint and ragged signs outside, and creaky floors and doors inside, typifying the dilapidated housing stock in the neighborhood. 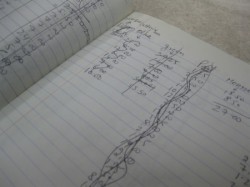 A page in an IOU book kept by the owner of City Spirits and Liquor in the Lindsay Heights neighborhood. (Photo by Brendan O’Brien)

Illustrating the economic struggles of many customers are signs plastered to the stores’ exteriors, noting that FoodShare, the state’s food stamp program, and WIC, the state’s women, infants and children program, are accepted by the business.

Inside, the latest winning lottery numbers and a handwritten “no checks” sign are taped to the Plexiglas in many of the stores, reflecting the hopes of the store’s clientele, and their financial plight.

Store owners meet the appetites and tastes of their customers by gearing packaged food choices to the neighborhood’s ethnic and cultural makeup. Some even compete with nearby fast food joints, offering prepared foods such as fried chicken, sub sandwiches and nachos.

The smoking and drinking habits of customers are also echoed by the liquor on shelves behind the counter and the “loosies” – single cigarettes sold for a quarter – offered by the cashiers.

Ultimately, the stores serve as a town square of sorts for tight-knit inner city blocks, where regulars come to chat about politics, sports and pop culture as a radio blares the latest hits and a slushy machine hums in the background.

“You get regular patrons that go in and form relationships with store owners and it becomes a home away from home in the sense that people from the neighborhood become very comfortable in the store,” said Marcus Britton, a sociologist at the University of Wisconsin-Milwaukee.

Store owner Inderjit Kaur, 45, is acutely aware of the perilous state of life in her neighborhood and the unrelenting financial hardships her customers face. It propels Miss Buddy, as she is known in the neighborhood, to give free food to customers in need.

But Kaur, who owns PJ’s Supermarket, 3079 N. 21st St., in the Park West neighborhood, shooes away youngsters who attempt to shoplift.

“Stupid. Some do stupid things,” she said.

“She feels that people should change around here,” said her 22-year-old daughter Jaspreet Singh, who translates for her mother. “But, basically all of the boys around here love her.”

Kaur reciprocates by donating snacks and cash to poor families who must bury loved ones lost to violence on the streets teeming with gang bangers and drug dealers.

“Sometimes it’s young people who you never think would be involved in a shooting. Then they are dead,” she said. 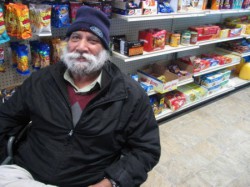 Streams of children darted in and out of Neighborhood Food Market, 2801 N. 20th St., in the Park West neighborhood, where they bought chocolate candy bars, 25-cent bags of potato chips and sweet drinks. They counted their coins on the counter as their friends waited impatiently behind them, playfully jostling for position in line and lending a nickel or dime when needed.

A man who goes by the name of Sonny Boy Bean said the store provides convenience to people who live within walking distance, especially for those who do not own cars.

“That’s the way I like it, right in the hood ’cause I don’t got to go nowhere, I just have to walk ’cross the street,” he said as he strolled to his home facing the store.

“Old folk that live around here can walk to go for their ice cream and go right back home,” he added.

The issue of mobility among the poor has provoked Janswinder Natt and his son Arshpreet, owners of Natt Groceries, 401 N. 35th St., in the Merrill Park neighborhood, to consider offering deliveries from the store they just opened last month.

“We have to keep in mind the people that we serve and their needs. We need to treat them like our own family,” said the elder Natt, behind his white beard and mustache as he sat cross-legged in a wheelchair.

Stores not immune to crime

“Someone got shot down the street,” a young man casually said standing on the doorway stoop of Center St. Market, 4630 W. Center St., in the St. Joseph’s neighborhood. Inside, three policemen jammed themselves behind the counter to view footage from the store’s security camera, hoping that it captured something of interest about the crime. 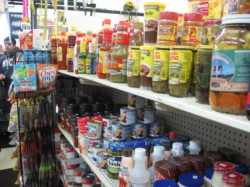 The stores also tend to be prime targets for armed robbers. On a warm May Sunday afternoon a year ago, three teenagers walked into La Tiendita, 3100 W. Mitchell St., locked the door and robbed the Burnham Park neighborhood store of large bills in the cash register and cigarettes behind the counter.

The owner of the store, Samuel Perez, who has been robbed three times, said the key to staying alive during a stick up is to let thieves have what they want.

“I tell my son and wife when they work not to say anything, just open the cash register,” said Perez as he stood below colorful piñatas shaped like stars and clowns hanging from the ceiling.

Despite the robberies, Perez, who has owned the corner store for seven years, has built a strong relationship with the neighborhood he serves. Perez offers an array of Mexican food such as bags of tortilla chips, spices and sauces that fill the shelves of the store in the largely Hispanic South Side neighborhood.

For Tom Griffien, Mid-Town Discount Foods, 801 N. 27th St. in the Concordia neighborhood, offers an alternative to shopping at big box stores, especially when he only can only afford a few items.

“I had to rob my piggy bank to get a few potatoes here,” said Griffien, as he held a clear bag of Russet potatoes and long carrots while unlocking his orange bicycle chained to a post outside of the store.