The March To Stop Violence

By Karen Slattery, Milwaukee Neighborhood News Service - Apr 17th, 2014 11:27 am
Get a daily rundown of the top stories on Urban Milwaukee 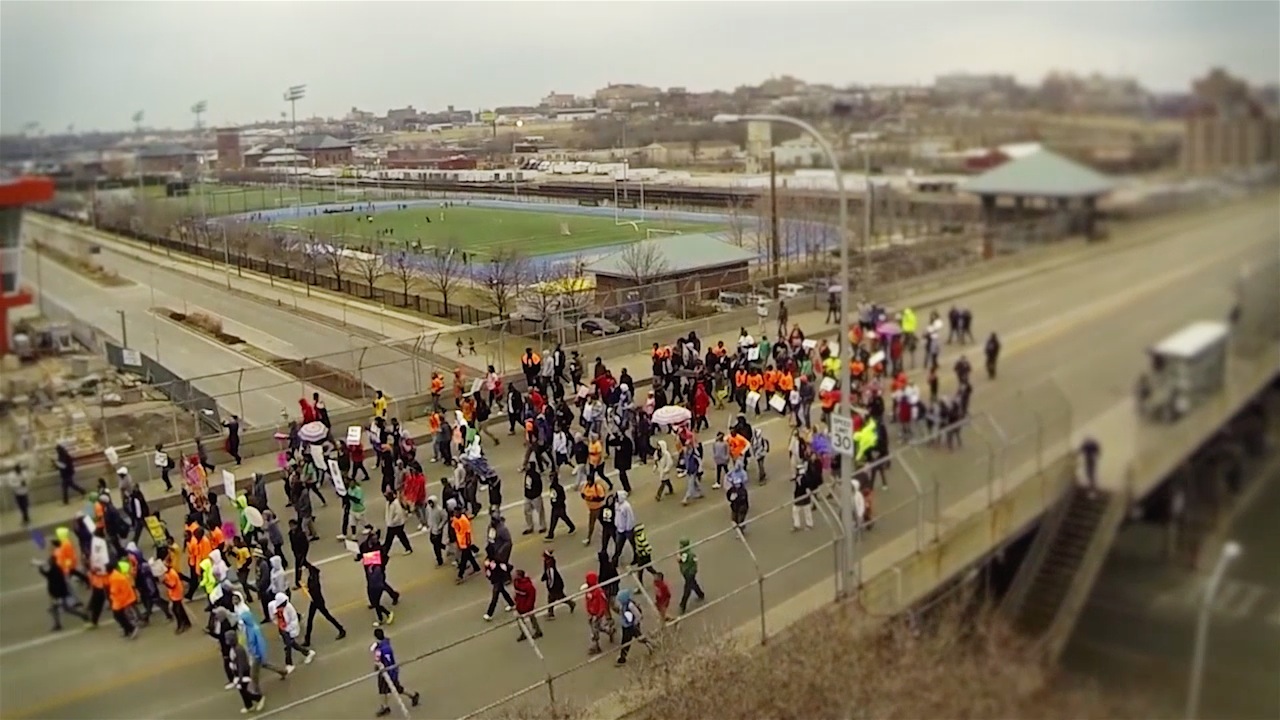 Derrick Shoates, a 21-year-old mentor to children in the city of Milwaukee, started his career at the Holton Youth + Family Center several years ago.

Already, his first mentee is dead.

Shoates met Darius Simmons the first day he began his mentoring job. He said he worked with Simmons for two years before the 13-year-old was shot and killed by an elderly neighbor who accused him of stealing.

“I took it hard,” said Shoates. Since then, he’s often wondered if there was something he could have done, “or we as a community could have done — that would have prevented the situation,” he added.

At Saturday’s “Bridge Project Milwaukee” kickoff event, Shoates, a member of Running Rebels Community Organization, together with members of other community groups, asked the people of Milwaukee to work with one another and with police to curb violence.

The morning’s highlight was a march on the James E. Groppi Unity Bridge, marking the start of a yearlong project to build symbolic bridges between community members.

Community members march across the James E. Groppi Unity Bridge as part of a campaign to stop violence in Milwaukee. (Photo by Karen Slattery)

The sky threatened rain as community members from the south side of the bridge began lining up at 9:30 a.m. to march north. At the same time, other residents gathered on the north end of the bridge to march south. Many of the marchers were children, encouraged to attend by staff members at community organizations.

Watching them was Norma Balentine, the director of youth programs at Safe & Sound. She said she helps youngsters try to understand violence by looking at the larger picture. “There is a cause for violence and it is not just at the individual level. It’s also at the policy level and some of the decisions we have made about community,” said Balentine.

Balentine said she tries to teach the children to use their voices for change. Getting children socially active, she said, helps reduce the chances that they will engage in risky behavior. “It is one way to redirect their energies,” according to Balentine.

The raindrops started as the marching began shortly after 10 a.m. but failed to dampen the groups’ enthusiasm. About 200 marchers, carrying signs and chanting, met in the middle of the bridge. There they were greeted by the Milwaukee Bucks’ mascot, Bango, who cheered them on.

After the groups joined together, they turned east and walked down an on/off ramp to a grassy area below the bridge where organizers had set up a canopy to protect a sound system and guest speakers. Tables with information about organizations dotted the area’s perimeter. 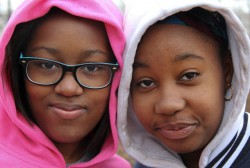 The event was one in a series slated for the next year. Organizer Katie Polace, program director at the Holton Youth +Family Center, said citizens are encouraged to build bridges with one another, in ways that range from “carrying groceries for neighbors to fighting for policy change.”

She said people will be encouraged to describe their efforts on a bridge project website and become eligible to receive an “I’m a Bridge” award. A music video about the project is also in the works. “Everyone can do something,” she added.

Dawn Barnett, co-founder of Running Rebels, said the project emerged, in part, as a result of the city’s “devastating year of violence” in 2013. According to Barnett, members of community organizations “took a step back and said enough is enough.”

“We have another summer coming up,” she said and organizations asked themselves and each other, “What if we all get together at the front end? Let’s all show that we can work together.”

Bridge walker Imya Patterson knows the impact of last year’s violence. She said that her cousin, Japhet Moore, 14, died in Milwaukee last summer after a fight broke out at a house party. “Somebody just brought out a gun and shot him,” according to Patterson.

“I was like sad and hurt at the same time because he was my big cousin. We used to play a lot,” said Patterson.

Patterson and her friend, Aniaya Carter, said they joined Saturday’s rally to try to help stop gun violence. “There’s a lot of people who’ve been killed for stupid things. And, it’s not right,” said Carter, also a sixth-grader.

The two were among those who gathered in the grassy area below the bridge as the drizzle turned to rain.

The group braved the wet and the cold to listen to speakers that included Milwaukee Mayor Tom Barrett, District Attorney John Chisholm, a police officer, other city and county representatives, and Milwaukee organizer Al Hegwood. Each encouraged citizens to work together to stop the violence.

Moving out from under the canopy and into the rain that began falling steadily by the time he was to speak, Mayor Barrett told the group he appreciated their participation. Said Barrett, “I believe in the future of the community because of people like you, people who care enough about safety in this city to get involved.”

Derrick Shoates was one of the last speakers.

He thanked everyone for coming. Microphone in hand, he called out to the crowd standing in the drenching rain.

“All pledge to be a bridge?” he shouted.

“Yes,” was the enthusiastic response.

Video of the March