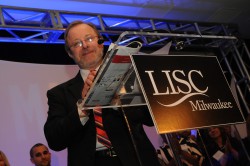 It’s been described as Milwaukee’s Grammy’s or Academy Awards, but it had a humble beginning. Fifteen years ago the Milwaukee Area Neighborhood Development Innovation awards began with a small group of people sitting around a slide projector. Last night, attendees packed the Pfister Hotel ballroom to the brim and an additional audience watched a live stream of the event at the Riverwest Public House. To say that LISC’s annual event has come a long way in a short time would be a great understatement;  the MANDIs are the annual event to see and be seen for those working to better Milwaukee’s neighborhoods.

According to the official website “The Milwaukee Awards for Neighborhood Development Innovation pay tribute to the people and organizations working tirelessly to make Milwaukee a great place to live, learn, work and grow.” The nominees honored last night have all effected big change. The winners are selected by a diverse review committee that visits every finalist to see the operation or project first hand.

I could write a very long column name dropping everyone notable person in attendance, but there are so many names you’d be jealous you weren’t there. Suffice it to say attendees ranged from Mayor Tom Barrett and Gubernatorial candidate Mary Burke to local bank executives such as US Bank‘s Lisa Glover and boots on the ground leaders like those from the team at Layton Boulevard West Neighbors.

Without further ado, the MANDI winners are…

Howard Snyder – The Northwest Side Community Development Corporation Executive Director. Snyder remarked that he promised Leo Ries he would retire if he won, but he didn’t say when. (Other Nominees – Charles Brown, Jan Christensen)

Just One More Ministry – The organization rescues food that would otherwise be thrown out from grocery stores and caterers to feed 1,700 people a week. (Other Nominees – 16th Street Community Health Center’s KK River Corridor Initiative)

Three Bridges Park – The park transformed the former Airline Yards space into a park that ties together the Menomonee Valley with the near southside. (Other Nominees – Milwaukee Rotary Central Arboretum, Journey House Packers Football Stadium)