The street also known as Wisconsin Ave. exemplified the conflict between dueling developers on each side of the river. 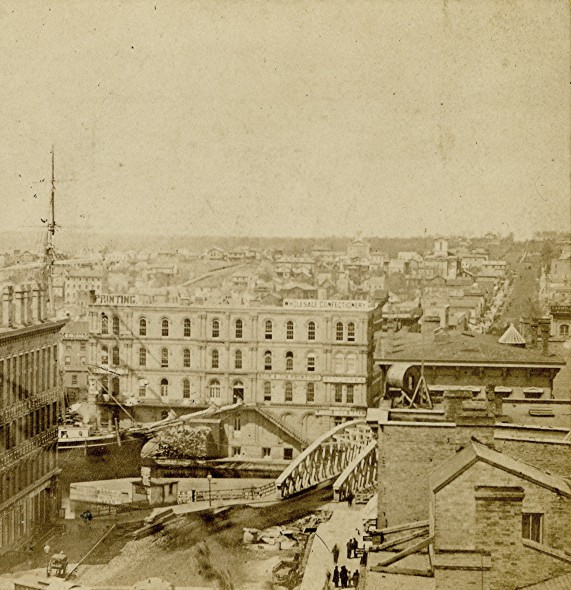 Ever notice that most of the streets east and west of the Milwaukee River do not exactly line up? The story dates back to the 1830s. The east of the river was developed by Solomon Juneau and Morgan Martin, the west by Byron Kilbourn. Competition between the two sides was fierce. An early 1836 map of Milwaukee only shows Kilbourn’s plats, completely ignoring the older east side. In the 1840s bridges would become a hot button issue culminating in a “Bridge War” in 1845 when the west-siders vandalized some of the few bridges. But in 1846 calmer heads ruled and three bridges were officially constructed and more amateurish ones were dismantled.  A good thing, too, as river traffic would dramatically increase when harbor improvements were added in the 1850s.

One of these three bridges was at Spring St., which was the name of what now is Wisconsin Ave., west of the river. East of the river it was named Wisconsin St., Solomon Juneau’s choice. In fact, at that time all of the east/west streets has different names east and west of the river. This photograph dates from 1867. It shows the Spring St. bridge. This is not the 1846 span, however. It is a wooden trestle swing bridge that replaced the former in 1866. This view looks to the west and the street on the opposite side is about 100 feet to the north. Take a closer look. At 5th St. the street takes a sharp jog back south, in line with Wisconsin St. This follows the path of the older Spring Street Rd., dating from territorial times. Areas farther west would follow this path when they would be developed.

Luckily in later years a rather elegant solution would be found to align the conflicting street path. This would be the Court of Honor, the section of Wisconsin Ave. between 9th and 11th Streets. This is the widest stretch of Wisconsin with a median that has landscaping and some notable statues. It also discretely redirects the traffic about 100 feet south, Notable buildings facing the Court of Honor include the Milwaukee Public Library and the Wisconsin Club (once the Alexander Mitchell mansion).