By Bill Lueders, Wisconsin Center for Investigative Journalism - Mar 19th, 2014 11:55 am
Get a daily rundown of the top stories on Urban Milwaukee 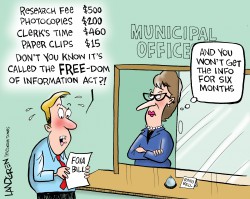 Careful readers may have noticed that, while many papers carry this column on their opinion pages, it is not an especially opinionated column. That’s because the columnist sees his mission as being to inform, not persuade.

But there is one exception, which bears examination. The columnist, who works for a nonprofit investigative reporting center, is also the elected president of the Wisconsin Freedom of Information Council, which seeks to protect access to public meetings and records. Its sponsoring members include the Wisconsin Newspaper Association, Wisconsin Broadcasters Association and Wisconsin Associated Press.

In this capacity, the columnist has taken stands for and against legislation that affects these vital areas, including testifying at public hearings. That’s something his readers have a right to know.

The columnist is comfortable with this dual mission, which is enshrined in the Code of Ethics of the Society of Professional Journalists. The code instructs members of the profession to avoid conflict but “recognize a special obligation to ensure that the public’s business is conducted in the open and that government records are open to inspection.”

Indeed, as part of national Sunshine Week, March 16-22, the columnist wants to reflect on the importance of journalists and others being more than mere spectators in the tug of war that perpetually plays out over these issues.

The two-year legislative session now drawing to a close has included attempts to impose new fees on records requesters, seal off records of university research, and purge information from the state’s online court records system. All were opposed by advocates of open government, including said columnist.

These are all battles against bad ideas, not bad people. The lawmakers behind these bills are trying to do the right thing, often unmindful of the downside of what they propose.

For instance, it’s not wrong to care about the costs government officials incur responding to records requests. But letting these officials impose huge additional fees would allow them to rebuff requests in critical situations — those in which they have something to hide.

Blowback from openness advocates was key to putting this idea on ice, at least for now.

Now consider the latest bill to gut the court’s online records system, commonly called CCAP. It calls for removing criminal and civil forfeiture cases that are dismissed, lead to not guilty verdicts or are overturned on appeal.

What’s wrong with that? Why should the public see rejected charges or fines?

Because these things happen in the court system they pay for. Under the proposed changes, the website would give an incomplete and distorted view.

For example, it would not show the full array of criminal charges against former state Sens. Brian Burke and Chuck Chvala, just the counts they were convicted of or were read in for purposes of sentencing.

It would not show that Radcliffe Haughton was charged with criminal disorderly conduct in 2011, which was dismissed because “an essential witness has failed to appear.” The following year Haughton killed three people and wounded four more in a shooting spree in Brookfield.

Also disappearing would be all those dismissed citations issued to protesters at the state Capitol. Do the Republicans who back this bill favor that?

The bill, if passed, would turn the site into a listing of the guilty and give every prosecutor a 100 percent conviction rate, as only those charges would appear.

The bill, which passed a Senate committee on a 5-0 vote, is opposed by Attorney General J.B. Van Hollen, the director of state courts, the Wisconsin Clerks of Circuit Court Association, and the Freedom of Information Council, among others.

Council members, including its president, reject the bill’s presumption that the people of Wisconsin are not smart enough or decent enough to make responsible judgments about cases in which charges are dismissed or a defendant has been found not guilty.

We think the people of Wisconsin deserve more credit than that. But that’s just our opinion.