By Dave Schlabowske, Bike Federation of Wisconsin - Feb 28th, 2014 12:06 pm
Get a daily rundown of the top stories on Urban Milwaukee 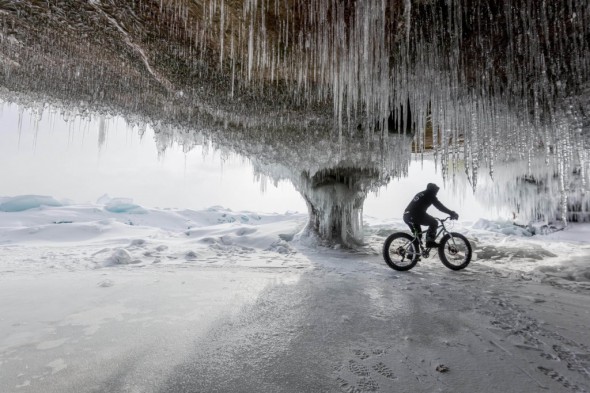 Nick Ginster rides through one of the larger frozen sea caves we found on the eastern shore of Madeline Island.

Thanks to the Polar Vortex, for the first time since 2009, the ice around the Apostle Islands National Lakeshore has been thick enough for people to visit the amazing sea caves. Bad news first: it is not legal to ride your bike within 1/4 mile of the caves in the park. The good news is there are plenty of beautiful caves along the shore of Madeline Island, which are accessible by bicycle via the ice road and frozen shore ice! But before you close your laptop and  start packing your fatbike for a trip to Bayfield, there are some subtleties I found out in my recent trip there.

Since I was already up in Minneapolis last weekend working at Frostbike, Quality Bicycle Products’ huge winter bicycle trade show, it seemed a great opportunity to take my Schlick Northpaw to ride around Bayfield and check out the ice show put on by Mother Nature. It did not take any arm twisting to get Julian Kegel from Wheel & Sprocket to throw his fatbike in the Fyxation truck with Nick Ginster and the three of us headed north. 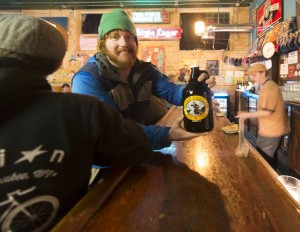 Julian Kegel holds a growler we picked up at the mandatory stop at the Thirsty Pagan Brew Pub in Superior. Great beer, specializing in sours, delicious deep dish pizza and the owner is a big supporter of bicycling!

I was particularly interested in going because I have been getting some emails from members who said they were getting mixed messages about whether it was legal to ride around the Apostle Islands. Some rangers were allowing them in and others were not. Meanwhile, the bike companies at Frostbike are now offering dozens of different fatbikes, which were  just not around the last time the ice around the Apostle Islands was open  in 2009. With the story getting national media attention and the boom in fatbiking in the midwest, it is no wonder there was initial confusion this year.

To clear things up, I set up a meeting with Superintendent Bob Krumenaker and Chief of Protection Chris Smith at the Apostle Islands National Park office in Bayfield. The three Milwaukee Ice Road Bikers were joined at the meeting by Hansi Johnson, the midwest International Mountain Biking Association rep and John Murphy, Joe Groshek and Mel Whiteside of the North Coast Cycling Association. I had been in early communications with the NCCA to get the lay of the land since the locals already had one meeting with the National Park Service about bicycle access to the sea caves.

The meeting was very cordial and productive, but the bottom line is NPS rules do not permit bicycles within 1/4 mile of National Lakeshore. Park Superintendent Krumenaker walked us through the history of the park transportation management plan and handed out copies of specific regulations, then he said “Don’t get me wrong, I love bikes and don’t think fatbikes would have any negative environmental impact on the ice, but the regulations are clear.”

Krumenaker did say there are certain things NPS superintendents do have some flexibility on and offered to ask his superiors if there was some relatively easy way he could allow bikes somewhere within that 1/4 radius. He promised to get back to us about that and we left the meeting agreeing to continue our dialogue. Who knows when the ice will freeze over thick enough for this to be an issue again, but with media stories this year and the rapid growth of fatbikes, we know the question will certainly come up again next winter. 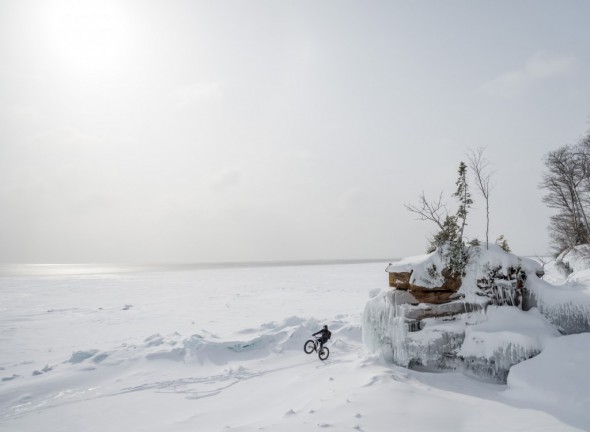 You can see open water in the distance off the coast of Big Bay State Park, so be sure to check the ice before you explore the shoreline. Nick Ginster of Fyxation proving he has the wheelie gene.

As I mentioned at the top of this post, and as you can see in the photos, the good news is that it is a blast to ride the two-mile ice road from Bayfield to explore the coast of Madeline Island. We found some spectacular frozen sea caves near Big Bay State Park. Joe Grosheck from the NCCA also told us about some other caves closer to Washburn and Ashland along the shore of Chequamegon Bay. 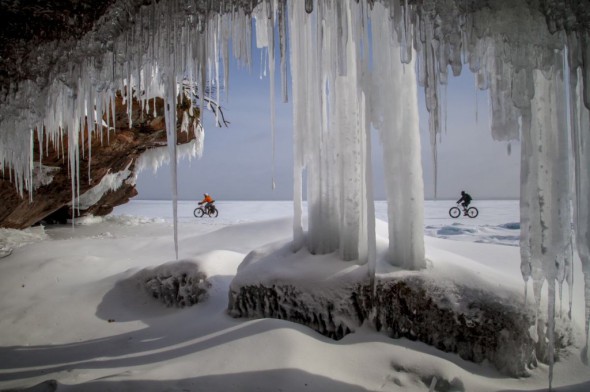 Nick Ginster and I roll the Superior shoreline past Julian Kegel as he photographed us while tucked away in a cave.

While they monitor the ice thickness for the ice road and around the Apostle Islands, riding the ice on Lake Superior is never deemed “safe.” Because of currents, the ice conditions can change from day to day. Like anyone snowmobiling out on the lake to go ice fishing, you need to take great care where you travel and check conditions before you go anywhere. Just because you are following someone’s tracks from the day before doesn’t mean it is safe when you are riding. 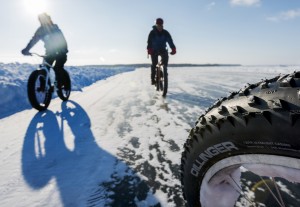 45Nrth Dillinger tires add a level of security on the black ice, but there is enough snowdrift to make riding safe without studded tires.

That said, if you have not ventured up to Bayfield to see the sea caves, it is worth the trip while they are still open. Definitely walk the route to the mainland caves by Meyers Beach. If you want to get a ride in and check off  a bucket list item, pedal the Bayfield to Madeline Island Ice Road that follows the summer ferry route. When we went, there was enough snow on it that studded tires are not required, but they do allow you to ride the clear ice. It is pretty cool to ride that transparent bridge! If you want to bike around the sea caves, you can check ice conditions with the ranger at Big Bay State Park, or just watch for snowmobilers and people ice fishing. 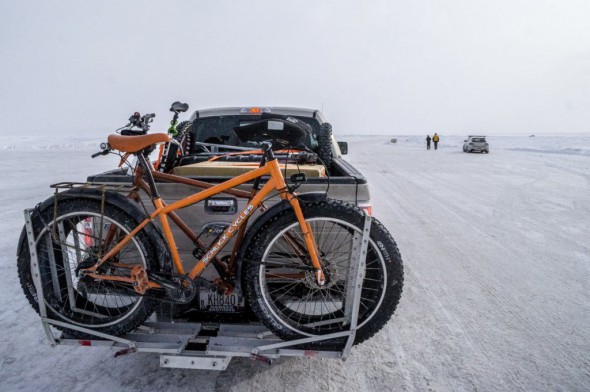 Our fatbikes traveled in style the entire weekend courtesy of  a sweet fatbike ready rack from 1UpUSA, a Platteville-based manufacturer. The 1UpUSA rack is made entirely of anodized CNC’d aluminum and is an engineering marvel. Loading fat-tired bikes is super quick, the bikes stay put once you lock them into the trays and it is easy to tilt them out of the way to open the rear gate. The racks cost only slightly more than similar models from other more well-known manufacturers, but they scream made-in-the-USA quality. Photo by Julian Kegel.

All in all, it was a wonderful, possibly once-in-a lifetime- experience for me to ride in frozen sea caves. You can definitely expect to see a story and more photos about bicycling Wisconsin’s North Coast in a future edition of the Bike Fed’s quarterly magazine. I can’t wait to get back there this summer and have the folks from the NCCA show me around the local CAMBA mtb trails, the quiet town roads and the gravel fire lanes.

But no matter the season, I can promise you a great time exploring Bayfield by bike.