Which states and cities lead the way in building a new economy? Part I of a three-part series. 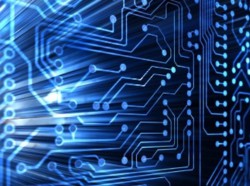 Of the two generic business strategies–cost leadership and differentiation—Wisconsin’s current efforts at business development mostly fit the cost leadership mold. This approach depends on attracting companies through low tax rates and business-friendly regulations. In recent years this strategy has been heavily promoted by a number of well-funded organizations, in Wisconsin and nationally. A win for this approach is the recent decision by Amazon to create a distribution center in Kenosha, motivated in part by government subsidies and the prospect of serving the Chicago market without paying Illinois’ sales tax.

The other approach, a differentiation strategy, looks to differentiate oneself from competitors by offering a unique value to the customer, ideally something that’s hard for competitors to copy. On a state level, attempting to build a high-tech innovative economy is an example of a differentiation strategy that could have a major impact for Wisconsin. Two organizations that do research and publish studies about building a high-tech economy are the Information Technology & Innovation Foundation (ITIF) and Kansas City’s Kauffman Foundation. Although starting from somewhat different positions, their conclusions are remarkably consistent.

The Kauffman Foundation has published several studies analyzing job growth. It finds that net job growth in the US can be attributed entirely to high-tech startups in recent years. In fact, large mature firms have destroyed more jobs than they created. As a group, startups outside the high tech areas create few jobs according to Kauffman. Kauffmann’s High-Tech Startup Density index rates metropolitan areas using the ratio of high tech startups—in industries with very high proportion of employees in science, technology, engineering, and math. The ratio of each city’s density to the national average is then calculated.

The focus of the Information Technology & Innovation Foundation is concern about lagging US competitiveness internationally, particularly in manufacturing. It advocates for what it calls the “new economy,” one based on innovation and entrepreneurship rather than cost cutting. ITIF’s State New Economy Index ranks states using 26 indicators in five broad areas (knowledge jobs, globalization, economic dynamism, the digital economy, and innovation capacity).

Although based on different information, the two rankings tend to come up with similar results. Metropolitan areas ranked highly by Kauffman are likely to be in states ranked highly by ITIF. In both the highest ranked states and cities are concentrated in the Northeast, around the nation’s capital, along the Pacific and in the Rocky Mountains. With a few exceptions, the southeast cities and states fare poorly. Most of the Midwest falls in the middle.

In both the the Kauffman and ICT rankings of high-tech startup density, a city like Boulder ranks the highest, at about 4, while the lowest ranked cities would have a density of zero. The national average is 1, but most big cities surpass this while small cities and towns rank below it. Except for Madison, all Wisconsin’s cities score below the national average. The overall scores of the state’s two largest cities—Milwaukee (which includes Waukesha) and Madison–both declined between 1990 and 2010, as did most other Wisconsin cities.

Even Wisconsin’s standout, Madison, while outperforming the rest of the state, fell below many of its university-town peers, particularly Boulder.  One Kauffman report found that Madison had the 5th largest decline among mid-large metropolitan areas in high-tech startup densities between 1990 and 2010.

ITIF’s New Economy Index ranks Wisconsin as 31st among the states. On most of the 26 indicators, Wisconsin falls somewhere in the middle. Kaufmann doesn’t rank states.

Why are some states and cities hotbeds of innovation and high-tech startups while others lag behind? Two factors stand out: a tolerance for odd ideas and a lifestyle attractive to “nerds” and investors.

-A tolerance for odd ideas. In a provocative essay titled How to be Silicon Valley, the Silicon Valley investor Paul Graham argued there was a “connection between technology and liberalism. Without exception the high-tech cities in the US are also the most liberal. But it’s not because liberals are smarter that this is so. It’s because liberal cities tolerate odd ideas, and smart people by definition have odd ideas. Conversely, a town that gets praised for being ‘solid’ or representing ‘traditional values’ may be a fine place to live, but it’s never going to succeed as a startup hub.”

It’s noteworthy that the two states recently in the news for legalizing marijuana are also near the top of the ITIF New Economy list—Washington at third and Colorado at seventh. The same pattern holds when other social issues are considered: states proposing further restrictions on contraception or abortion, for instance, predominantly fall near the bottom of the New Economy rankings and their cities tend to have low high-tech densities.

Expanding on Graham’s argument about the connection between tolerance and liberalism, the scatter plot below compares ITIF’s New Economy Index with percentage voting Democratic in the last presidential election. You can see that many of the states that have a high ITIF rank on the vertical scale (lower values are better) voted by 50 percent or more (as measured on the horizontal scale) for the Democratic candidate in 2012. Those with a low percentage vote for the Democrat tend to be clustered toward the bottom of the ITF rankings. To compensate for personal connections between a state and one of the candidates, I used 2008 results for Utah and 2004 results for Hawaii. Statistically, the relationship is strong, explaining 44 percent of the variation and with a p-value under .0001. 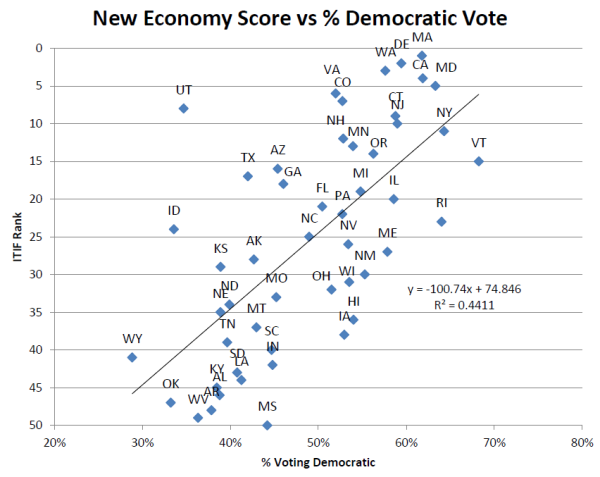 A correlation coefficient of .66, however, still allows for considerable scatter. Unfortunately for Wisconsin, it scatters in the wrong direction, coming in 31st, rather than a predicted 22nd place if it was consistent to the model.

-An attractive lifestyle. Parks, bicycle trails, and other amenities are often derided as frivolities, to be funded only after more practical necessities are taken care of. The counter view is that these have become requirements of economic success by attracting the people with technical strengths.  As Graham argues, talking about the sort of people who start, work in, or fund the companies in Silicon Valley, “they like well-preserved old neighborhoods instead of cookie-cutter suburbs, and locally-owned shops and restaurants instead of national chains….. they want to live somewhere with personality…. Most towns with personality are old, but they don’t have to be. Old towns have two advantages: they’re denser, because they were laid out before cars, and they’re more varied, because they were built one building at a time.”

Enterprises are becoming increasingly less dependent on proximity to raw materials and much more dependent on being in places where people want to live. Advocates of this model can point to the success of cities like Portland, famous—and much mocked—for emphasizing amenities like light rail and bicycle friendliness. Portland, in fact, was missing entirely from Kauffman’s 1990 list of the top 20 large cities for high-tech startup densities, but placed eleventh on the list for 2010. There is a strong statistical correlation between the League of American Bicyclists’ ranking of states for bicycle-friendliness and the ITIF New Economy rankings.

A recent report from the entrepreneurial-support organization Endeavour surveyed 150 founders of high-growth companies to see what they wanted in a city. The survey found that the entrepreneurs chose a city years before starting a company based on the quality of life and personal connections. Once the company was started in a city, it stayed put. The most important resource mentioned was a pool of talented employees. Only 5 percent mentioned low tax rates and 2 percent business-friendly regulations as reasons for starting businesses in a specific city.

A century ago Wisconsin prospered by building companies that were on the forefront of the technology of the time. Little of the state’s prosperity depended wooing companies here from other states, on branch plants and distribution centers attracted by low costs. So in some ways building a high-tech economy is returning to Wisconsin’s roots. With its progressive traditions, the state should be matching Minnesota, yet it is lagging behind. In future articles I plan to explore possible reasons why.

10 thoughts on “Wisconsin Lags in Building a High Tech Economy”