Built in a former schoolhouse, Hi Hat offers a broad education in mixology.

In 1872, prompted by the growing Polish community’s reluctance to send their children to  Milwaukee’s public schools, St. Hedwig’s Catholic Church on Brady St. established its first elementary school. According to a Brady St. historic designation study, the first building was a small, red frame structure originally located north of the church rectory on N Franklin Pl. By 1879 the school was too small for the growing parish, so plans were made to construct a new building. The parish auctioned off the old building in order to raise money for the new one, selling raffle tickets for $1 apiece. In the end, St. Hedwig’s (today part of the Three Holy Women parish) raised $400, with the schoolhouse going to Francis Miszewski. He later sold it to Joseph Polczynski for $50, who moved the building to its current location at 1701 N Arlington Pl., and encased it with a brick veneer and added a rear addition.

Since 1998 the Hi Hat Lounge has occupied this building, at the northwest corner of E Brady St. and N Arlington Pl. When owners Leslie Montemurro and Scott Johnson, who run several other cafes and restaurants around Milwaukee, leased the building, it had already been home to several bars, but the interior was largely demolished. Montemurro says the previous occupants had pulled out the street level floors and were in the process of gutting it. “That’s what gave us the idea to put the bar in the basement,” Montemurro says. “We were standing on a ledge at street level and it looked amazing to see the entire space from basement to roof. We did all the work ourselves without a contractor. It was pretty insane.” (A third partner in the original venture, Mike Eitel, later ended his partnership and today runs the Lowlands group of restaurants.) 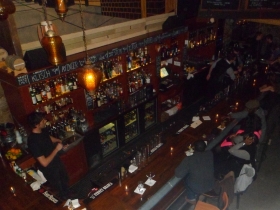 When the Hi Hat Lounge opened, Montemurro says bigger cities, like New York and Chicago, were showing a definite trend toward lounges, yet there were few places like that in Milwaukee. So it seemed like a good idea. Working with what was left of the interior, Montemurro and Johnson transformed the street level into a dining area that, with railings, allows customers to look down into the basement, where the bar is located.

Hi Hat originally served small plate food comparable to that served at Balzac, another of Montemurro and Johnson’s ventures. However, when Hi Hat expanded in 2000, adding the Garage (the building next door that was converted from an old auto repair shop), Montemurro noticed that customers frequented the Garage more for meals, seeking bar food, like burgers and sandwiches. Although different in style and drink selection, the Lounge and the Garage now share the same menu. The menu was recently tweaked a bit when Hi Hat welcomed a new head chef.

Although it has been nearly 140 years since students occupied the building, people can still go there to get an education. It’s just that instead of reading, writing and arithmetic, it’s a lesson in classic cocktails. The earliest drink menus at Hi Hat concentrated on martinis. However, over the last few years, under the watchful eyes of general manager Dan Dufek and manager Cody Magee, Hi Hat has focused on a wider array of cocktails. “The martinis are a great cocktail,” Magee says, “but we felt like we were ready to highlight the unique flavor of spirits.” Dufek agrees: “Martinis are a troublesome category. It’s a misleading term. The way we [as bartenders] understand them is different.”

A traditional martini is made with gin and vermouth, often garnished with an olive or lemon twist. Over the years, though, people started to add different flavors, which Dufek says distorts what a true martini is. “A martini is a specific drink. It’s nothing like a cosmopolitan,” a drink Dufek says people often confuse for a martini. “It’s a confusing part of the nomenclature. Over time it’s come to mean different things to different people,” he says. 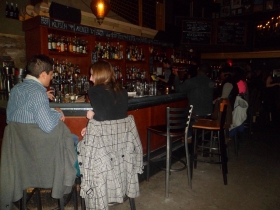 Hi Hat Lounge no longer has a martini list. But apparently the readers at onmilwaukee.com haven’t quite figured this out, as Hi Hat has continued to win their nod for best martini in town. Dufek says it will probably take a few more years for patrons to catch up. In the meantime, people can still come to Hi Hat for their martini fix. “You can still come in and ask for a blueberry martini,” Magee says. “We have more than 350 flavors of liquor. Our bartenders can make you anything. Now we just choose to put more drinks on the menu that highlight the flavor of spirits.”

Hi Hat also introduced new glassware, since it was too restricting to always serve drinks in a martini glass. Getting away from vodka, especially flavored vodka, Dufek says drinks now include more fresh juices and ingredients, as well as housemade syrups. The current drink menu takes a more classic approach to cocktails. It includes seasonal cocktails, as well as those deemed classic, Manhattan, martini and evolved. All of the ideas come from classic cocktails, with bartenders often changing one or two ingredients to make it more unique. In the seasonal drinks, for instance, an original ingredient is subbed out for a flavored syrup or liqueur that‘s more seasonal.

When Dufek took over as manager three years ago, he constructed the drink menu on his own. In the last year or so, though, he has opened it up to everyone, opting for a more “hands-on-deck” approach. Usually a couple months before the menu is due to change, Dufek and Magee let bartenders know how many drinks they are looking for, as well as what kind, like a gin drink, rum drink or tequila drink. Once some ideas are formulated, they make the drinks for one another, with Dufek and Magee making the ultimate menu decisions.

Then comes the most difficult part: naming the drinks. “That’s our favorite part,” says Dufek, his tone dripping with sarcasm. Magee says you can take one of two approaches when naming drinks: either pick something completely random or think about the drink’s ingredients, choosing a name in relation to that. Hi Hat opts for the random approach, naming cocktails after songs or people. The seasonal cocktail “The Beautiful and Damned” comes from an F. Scott Fitzgerald novel.

Then he gets serious: “There’s a cultural aspect of cocktails, they often have a story tied to them. There are hundreds of open bottles of liquor to choose from behind the bar. Every single bottle comes from a place and it’s cool to learn and share stories about different liquors. Being interested in literature relates to that.”