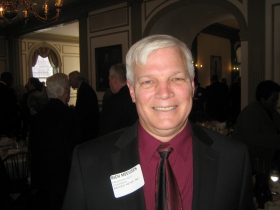 Milwaukee is “far ahead of everybody else” in establishing itself as the international water hub, Badger Meter Chairman, President and CEO Rich Meeusen told the 65th annual meeting of the Greater Milwaukee Committee (GMC) Monday at the University Club.

Meeusen, a vice chair of the community leadership group consisting of 185 area CEOs, is co-chair with Ted Kellner of its Economic Development committee. He also co-chairs, with Paul Jones of A.O. Smith Corp., the Water Council, which he co-founded in 2007. Meeusen said the group’s Global Water Center, 247 W. Freshwater Way, is “now almost out of space.” The 7-story building was 70 per cent leased when it opened in September, 2013. [The GMC is one of the building’s tenants.]

Meeusen said the Water Council is “successful because it is not government-run. But the Global Water Center would not exist without the efforts of the City of Milwaukee and the Wisconsin Economic Development Corporation” in addition to the council and the GMC, he said.

Yet “when other cities ask how to [make themselves global water centers], I tell them it has to be government-led,” he joked. 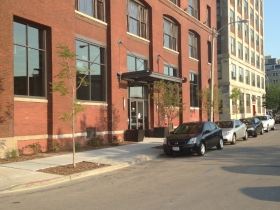 Meeusen says the City of Milwaukee, the City-State of Singapore and the nation of Israel are the most important centers of water-based study and innovation in the world. Milwaukee has an edge, he feels — not just because we are the only one of those places with abundant fresh water, but because of the unique resources provided by the center.

One program cited is the center’s “Seed Accelerator Program” which offers one year free rent and a check for $50,000 for select start-ups to locate in the building. “It’s one year, and then out,” he said, before the firms must vacate for a new class in this first-in-the-nation program.

The first class of five companies will “graduate” in June, he said. Six more will be coming in September. The five start-ups are H20 Score, Microbe Detectives, New Works, Noah Tech and Vegetal I.D, a green roof subsidiary of a French firm. While in residence, the firms’ executives must take classes (offered on site by UW-Whitewater Institute of Water Business) on topics like finance, marketing, sales, etc. Meeusen said many entrepreneurs have a good handle on their area of expertise, but need such corporate skills training to compete successfully in the global marketplace.

Meeusen was a last-minute speaker, filling in for Bud Selig, who was unavailable, but is promised for the April meeting, according to GMC Chair and retired Quarles & Brady partner John Daniels.

Meeusen said, “the greatest baseball commissioner in history is being replaced by the water meter guy.” Noting the time constraints involved in a luncheon speech, jokester Meeusen promised to make his address “faster than you can snatch a Stradivarius from a stunned musician,” adding, “or is it too soon for that?”

A voice in the crowd (that of Mayor Tom Barrett) retorted, “We got it back!”

Meeusen said “I travel around the world talking about water. I have no social life. My wife says when we’re at a cocktail party and I start talking about water, people look for  life insurance salespeople to talk to. ‘Sorry, Rich, that water is interesting, but I’m afraid I’m underinsured.'”

Meeusen has taken some criticism for his stance that water is a key to the future economic development in the region. He cited, (without naming names) Marc V. Levine of UW-Milwaukee, who has found fault with some of Meeusen’s assertions. Levine, Meeusen said, once called him a “Music Man,” after the lovable huckster who peddled  musical instruments for a boys band in River City, Iowa in Meredith Wilson‘s musical. As he spoke, a picture of Robert Preston as The Music Man filled the screen behind him.

Meeusen said the comparison was unfair, since he is from here, and is not an itinerant salesman. Also, he “wouldn’t have a chance with Shirley Jones.” He continued on the Music Man theme for some time, and said he thought that the unnamed professor was in the field of economics. (In fact, he later found out, Levine is a history professor.)

One of Levine’s criticisms, Meeusen said, was that the professor was concerned that the Water Center would provide more science, economics and engineering majors, and not history or philosophy majors. Meeusen said this was unfair. “I love history majors. I always tip them 20 percent.”

Channeling his inner historian, Meeusen talked about MiKE, a GMC program that leads to “partnerships between corporations and emerging talent networks,” according to the GMC’s annual report, issued that day at the meeting. MiKE featured the “Flying Car” event in 2013 drawing 3,504 attendees last June. This year the event will coincide with Summerfest, he said.

Meeusen found parallels with 15th century Florence, where Cosimo de Medici, a banker, needed to attract new talent to replace the city’s earlier textile industry which had relocated elsewhere. Medici attracted outsiders like Michelangelo, Donatello, Raphael and got them all to move into the city. “He mixed innovators with business people and old money.” [The latter two categories supply most of the GMC’s membership.]

He also talked about the Corporate Council — “not Corporate Counsel,” he advised the audience, singling out Atty. Ulice Payne. “These are productive members of society,” he joked, adding that the only group he hadn’t insulted that afternoon was the French. The Corporate Council, he said, is a “celebration of Milwaukee creativity and innovation.” 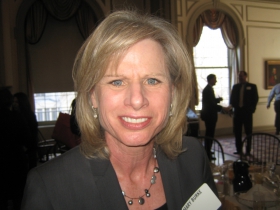 Over 150 people attended the event, including Mayor Tom Barrett and Mary Burke, the presumptive Democratic candidate for Governor, who had been introduced to the event by Daniels only as a “former state Commerce Secretary.” Burke told me that she has longstanding ties to the City of Milwaukee, which is certainly to become a campaign theme as she seeks to unseat Governor Scott Walker in November. She was joined by Mary McCormick, the president of the Rotary Club, Nancy J. Sennett, the GMC secretary and Foley and Lardner partner, Marilyn Vollrath, Laurie Hope, Thelma Sais of WE Energies, Dan McKeithan, Dean Amhaus, Linda T. Mellowes, Rand McNally of KB Power Solutions, Austin Ramierez of HUSCO International, Cecelia Gore of the Milwaukee Brewers Foundation, Julie Tolan, the head of the YMCA, former Alverno President Sr. Joel Read and her successor, Eileen Schwalbach. Asked if the men in the Vatican are finally listening to women religious, Sr. Read said simply, “we’ll see. But things are deeply ingrained there.”

Also in attendance was Mary Ellen Stanek of Robert W. Baird & Co., along with Phyllis King, Associate Vice Chancellor of UWM and head of Milwaukee Women, Inc., a group that seeks to increase representation by women on corporate boards. King presented the second annual Mary Ellen Stanek award to Manpower CEO Jeff Joerres for his efforts on behalf of this cause. Manpower’s board is now 30 percent female, with 55 percent of management being women. Joerres said Manpower “sets an example for companies worldwide.” 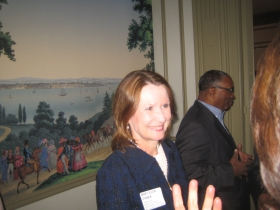 Joerres said Manpower has had women on its board for 30 years. He said “a diverse board makes better decisions and we make more money” because of the diversity. He said too many boards lacking diversity lack growth and imagination. “We increase profit because of the dialog.”  He said if his board were composed only of Jeff Joerreses, “we could make decisions quickly, but it would be bad for lack of input of diverse viewpoints.”

Joerres accepted the award with due modesty, saying, “I would most likely not be receiving it if Betty Quadracci were still with us. I accept this in honor of Betty Quadracci.”

Mayor Barrett made his pitch to the crowd in a brief address, suggesting that the CEOs there make a commitment to hiring youth this summer. The city coordinates youth hiring, and does not charge for overhead or staff time, he said. He told the audience that when he was at Marquette University High School in 1970 he got a job as an usher at Brewers games. One rainy day, he decided to blow off work figuring (correctly) that the game would be rained out. Instead he did his paper route, and his job at the neighborhood drug store.

At the next home game, when he showed up to work, he was fired. “But the game was rained out,” he remonstrated to his supervisor, only to learn that nevertheless, the gates had been open for a few  hours, with no future mayor to attend to the attendees. His supervisor, he said, gave him a second chance.

“Everybody in this room has been in a similar situation,” Barrett said. “All I’m asking is give a kid a chance.” The mayor said Milwaukee businesses hired 3,000 youths last summer, but said he learned at a US Conference of Mayors seminar that Boston, of about the same population, “puts us to shame,” with 10,000 jobs last summer.

[For more information on Mayor Barrett’s Earn and Learn Summer Youth Internship Program, including a way to participate, click here.]

Barrett, Almond Get New York Times Quotation(s) of the Day

The Page 2 “Quotation of the Day” in the New York Times is a long running feature of the paper, and more recently its website. The print edition of February 7th included a quote from Mayor Barrett, from an above-the-fold front page story about the recovery of the stolen Stradivarius violin. (The story did not merit above-the-fold mention in the Milwaukee Journal Sentinel). The mayor’s quote: “There are good days, and there are bad days. Today was a good day.”

The mayor said he was unaware of the quotation’s selection for its honor until it was brought to his attention by this reporter.

The online version of the paper has a different quote, however. This one also has a Milwaukee connection, and is from Frank Almond, the violinist who was robbed of the priceless violin.

“‘This is just one more unbelievable chapter in that violin’s life.’ — FRANK ALMOND, concertmaster of the Milwaukee Symphony Orchestra, after the recovery of a 300-year-old Stradivarius that was stolen last month,” the online version read.
Categories: Plenty of Horne, Politics

One thought on “Plenty of Horne: Will Water Technology Transform the City?”