How Rogue Aides Can Ruin Politicians

Gov. Chris Christie’s problems are a lesson to every politician in Wisconsin. 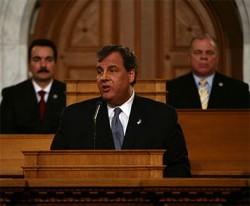 Gov. Chris Christie. Photo from the State of New Jersey.

New Jersey Gov. Chris Christie is a reminder of this political axiom:

The most dangerous persons for an elected state official – Democrat or Republican – are often junior staffers who are dead-sure certain of what The Boss needs to know, what they think they can fix without The Boss knowing, and are dedicated to helping The Boss keep winning elections.

Christie is now reeling from decisions made by those he trusted – many of them now ex-aides – subpoenaed by Democratic legislators. The New Jersey governor insists he was never told, and didn’t know, that those aides closed George Washington Bridge lanes from Fort Lee to punish that city’s mayor for refusing to endorse Christie’s re-election.

The traffic jam stranded angry commuters, school children and those on their way to medical appointments. The controversy may or may not ruin Christie’s bid to be the Republican nominee for President in 2016.

Every elected official across the nation should learn from Christie’s example, since they all run the risk of having overzealous aides, volunteers and even interns act in ways that embarrass or ruin them.

Here’s how it happens: Your best friend from high school, college, or even elementary school stays close, and helps out you when you run for office. Or a kid, willing to do anything, shows up at your first campaign office. Or a wide-eyed college student majoring in political science wants to learn about politics firsthand, or to get a college credit or two.

They drive you to campaign or official events, make “please vote” campaign calls, take and pick up your dry cleaning, babysit your kids in an emergency, and make sure fund-raising events are a success. You end up trusting them for years, maybe decades. They are there when you make the toughest political decisions:

How do we attack our opponent? What do we leak to a friendly reporter? What position do we take on an issue that polls 50-50 back home? Who’s writing checks?  Can they give more? Why is someone not donating to us? How does this race lay the groundwork to run for the Legislature … for Congress … for Governor …for President?

If you win an election, you may find a job with a real salary and real benefits for them. Or, if they don’t get a patronage job, they remain part of your “kitchen cabinet” group of insiders.

Soon, even though they may still be in their 20s, those aides confidently know – absolutely know! – how to help you, what calls you should not take, who you should and should not meet with, and how to protect you.

You’re a Very Busy Person, after all. You can’t meet with everybody. You can’t make every decision. You have to trust somebody, so why it shouldn’t be someone who has been there from the beginning who knows all you’ve been through?

Those aides have entered the Danger Zone. They can give orders, or respond to controversies, using that “I’m speaking for The Boss” tone that commands attention.

Not only can those aides make the wrong decision, but they also decide when – and how – to act without The Boss’s knowledge, intentionally giving The Boss deniability if their decision blows up. If it blows up, they know they’re gone. History. “No longer works here.”

One more reason why those aides are especially dangerous: They are often so seduced by politics that they plan to run for office – maybe even your job, if you move up the political ladder or retire. At that point, the aide may not make the best decisions for The Boss.

*Four-term GOP Gov. Tommy Thompson told his campaign managers: I want to win by a bigger margin the next time that I did last time. Imagine what pressure that put on campaign managers, and those working for them.

*An aide to former GOP Gov. Scott McCallum once ordered cheap silver discs bearing McCallum’s image to give to Capitol visitors to his office. It was news to McCallum.

*Aides to Republican Gov. Scott Walker made some decisions – having Walker take a call from a liberal talk-show host pretending to be a conservative billionaire and hiring an ex-campaign worker who disparaged minorities on social media – they would like back.

But so far, none of those eager aides and their sometimes questionable decisions have hurt their boss as badly as the political wound Christie has suffered.

5 thoughts on “The State of Politics: How Rogue Aides Can Ruin Politicians”