Mamie’s Has the Blues 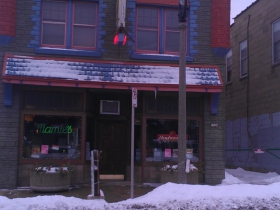 Debbie Mickey opened Mamie’s Bar and Grill (3300 W. National Ave) in 1981 and has established it as one of the Silver City neighborhood’s longest operating bars, going on its 33rd year this August. Six or seven nearby bars have shut down since she opened.

Mickey opened Mamie’s on somewhat of an impulse without a business plan. “I was 27 years old, I didn’t know what I was doing,” she chuckles. “I’d been bartending since I was 15 at my parents’ bar in the Third Ward. Ten years later, they sold that bar and I bought this space on a land contract and borrowed money to open it.”

Silver City is a compact neighborhood from from 31st St. to about 40th St., and between the Menomonee Valley and Greenfield Ave., with the National Avenue retail strip at its heart. Mickey’s goal was to give nearby residents a “comfortable place to go.” She named it in honor of her mother. “It sounds different and it’s easy to remember,” said Mickey.

Relying on mostly word-of-mouth advertising, Mickey opened Mamie’s on August 3, 1981 to a busy crowd. Her mom and two good friends were her first employees. “Nearby railroad workers came in along with people from the neighborhood and Joy Global employees near Miller Parkway,” recalls Mickey. 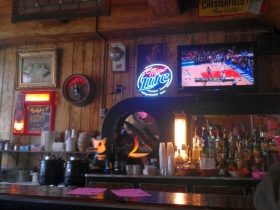 The bar at Mamie’s Bar and Grill. Photo by Mrinal Gokhale.

The crowd at Mamie’s has gone from people in their 20’s to people in their 30s, although sometimes college students take cabs to the bar later in the night, mainly during summer. The busiest nights are Tuesday (open mic night) and Friday (blues night). Mickey first brought in country and rock bands, but then switched to blues. The Misfits played consistently for two years and was the bar’s longest running band. Other big name blues artists who played include the Charles Walker Band and Reverend Raven which still frequently play there.

“I tried charging cover on music nights, but it didn’t work. Instead, I just raise drink prices on music nights by 50 cents to help fund the performance costs,” Mickey says.

Mamie’s is best described as a cozy neighborhood bar, with dim lighting, a pool table, video games, an old Coke machine, antique decorations and collectibles, and many regular customers. It attracts big crowds for Packers games. Many Chicago residents stop by during Brewers games.

Mickey feels that maintaining consistency with blues nights and fairly priced drinks in a working class neighborhood is the key to sustaining success. She offers different food and drink specials every day, with dollar dogs on Mondays and $1.50 tacos and $2.75 margaritas on Wednesdays. 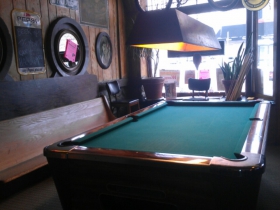 For a small tavern, Mamie’s holds some of Milwaukee’s biggest neighborhood outdoor parties. That include a May rummage sale, Silver City Day on June 7th, a corn and bratwurst day in June, a July chicken fry, an August pig roast anniversary party, and October’s “last hurrah.”

“On Silver City Day, we gather outside and have a cook out with beer stands while watching bands play. People from all over metro Milwaukee come to socialize and enjoy music. Our “last hurrah” celebrates the end of the warm weather. We have blues and R&B bands playing and about 600 people come and go,” Mickey says.

She takes pride in hosting holiday parties when the outdoor parties are over. For the yearly Christmas party, which customers can donate unwrapped toys and enter in a raffle, with proceeds going to the Sojourner Center to support children and families in need. The next party is on Valentine’s Day where Reverend Raven will perform at 9:30 p.m., as they hold a raffle for a Bartolotta’s gift certificate, a box of chocolate, roses and $100 in cash.

“I always ask my customers if they want theirs spicy. People love how I make Bloody Marys and they sell well on Sundays,” says Curtis.

Curtis has decades of bar tending experience and has been with Mamie’s the longest, about 16 years. He started as a customer and established relationships with other customers before receiving a job offer a few years later.

“Debbie is fun and easy to work for and a friend. We have about 14 employees now and people work here for 8 to 10 years on average,” he says. “I know about 85 percent of the customers and some people who came when it first opened still come in just to say hi.”

What explains Mamie’s longevity? “We take pride in keeping our bar clean compared to other neighborhood bars,” he says. “We always have customers even when it’s not as busy as we wish. And summer is fun because we always have something going on.”

Mamie’s is open from 6 a.m. to closing every day. Visit http://mamies.net for daily specials and the weekly music schedule.