Most Support Action on Climate Change

Stanford University recently conducted nationwide public opinion surveys about climate change. Among other questions, respondents were asked if global warming had been happening and if they believed the government should regulate greenhouse gas emissions.

One might assume that these numbers, wherever they may fall, would be fairly close together. But that wasn’t the case.

The Great Lakes states were no exception:

Here are all of the percentages (from highest to lowest) of people in each Great Lakes state who answered “yes” to the question: Has global warming been happening?

Here are the percentages (from highest to lowest) of people in each Great Lakes state who answered “yes” to the question: Should government limit greenhouse gas emissions from U.S. businesses? 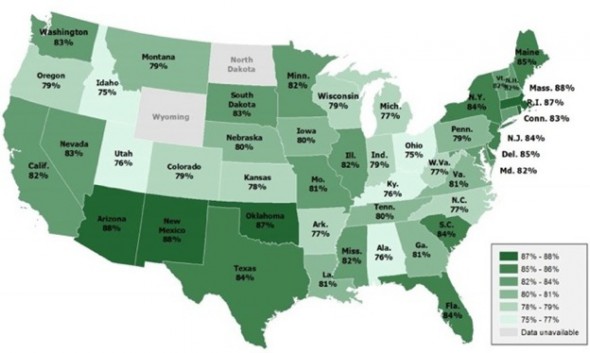 This map shows the percentage of Americans who think global warming has been happening. Photo: Stanford Geospatial Center.

To look at any state’s answers to these and similar questions click here for the full report. Data is unavailable for Alaska, Hawaii, North Dakota, Wyoming, and the District of Columbia.

One thought on “Most Support Action on Climate Change”