We Don’t Want Your Stinking Drones

By Bill Lueders, Wisconsin Center for Investigative Journalism - Jan 29th, 2014 09:23 am
Get a daily rundown of the top stories on Urban Milwaukee 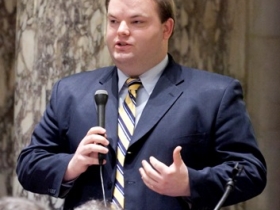 At a legislative committee hearing last May, state Rep. Tyler August began his testimony on AB 203, a bill to restrict the use of drones in Wisconsin, with an interesting boast.

“This is probably the best bill that will come before this committee this session,”said August, R-Lake Geneva, the lead Assembly sponsor.

While that statement proved a bit rosy, the bill does have a remarkable pedigree. In a Legislature where members of one party sometimes walk out when the other side talks, AB 203 and its companion, SB 196, enjoy broad bipartisan support. The roster of cosponsors consists of 18 Republicans and 11 Democrats.

“We sort of view ourselves as the privacy caucus,” said Rep. Fred Kessler, D-Milwaukee, during a second hearing on the bill, before a Senate committee, on Jan. 15.

Drones — unmanned aerial vehicles, some equipped with high-definition cameras — can be purchased online for as little as $35 and put to all manner of purposes, from useful to troubling. In fact, Amazon.com has floated the idea of using them to make deliveries. Yes, that drone you buy in the not-so-distant future might arrive by drone.

The bill would prohibit the use of these devices to photograph, record or observe others in a places where they have “a reasonable expectation of privacy.”

“If you’re at the Badger game, you don’t have a reasonable expectation of privacy,” August said at the January hearing. “But if you’re in your backyard with friends having a barbeque, I think the last thing that you want to see is a drone.” That or a twister.

The bill would also limit the use of drones by law enforcement officials without a warrant, except for emergencies, like a search and rescue mission.

Kessler, at the hearing, gave a concrete example of what he didn’t want the government to know: “Which tavern did I visit last night and how many different stops did I make?” That could be a whole other column.

Just one of the state’s more than 700 registered lobby groups has taken a position on the bill: the American Civil Liberties Union of Wisconsin, which supports it. Several states have passed and many are considering similar bills.

“We’re afraid the technology is going to get ahead of the policy,” executive director Chris Ahmuty says in an interview. The ACLU believes law enforcement officials should need a warrant to use drones to snoop, “to protect what’s left of the Fourth Amendment,” against unreasonable searches and seizures.

But, as often happens, the bill has drawn as much flak as praise. On the day of the first hearing, Mark Reinhart, legislative liaison for the state Department of Justice, submitted a letter expressing his concerns.

He said the bill as drafted would bar the use of evidence obtained by drones without a warrant even in “purely public spaces” — like an illegal marijuana grow operation discovered during a drone flyover of a state forest.

And Reinhart warned that the bill might bar the accidental observance of private activity by drones used for some legitimate purpose but not the deliberate intrusion into private areas where no one happens to be.

An amendment was drafted to address these concerns. But the DOJ still opposes passage, and suggests that the Legislature wait on drone-control efforts afoot in Congress and the Federal Aviation Administration.

The bill’s proponents are optimistic that the bill can be tweaked further to satisfy the DOJ. Luke Bacher, an aide to August, believes it could still pass this session. But the bill has faced a much rougher ride than his boss anticipated, and time is running out.

Still, when seen at the right angle — call it a drone’s-eye view — what’s happening here is not a legislative breakdown but the legislative ideal: earnest people working in a bipartisan fashion to tackle a complex issue, trying to strike the right balance.