Before the days of Prospect Avenue mansions, the lakefront sported modest frame houses on an eroding, sandy bluff. 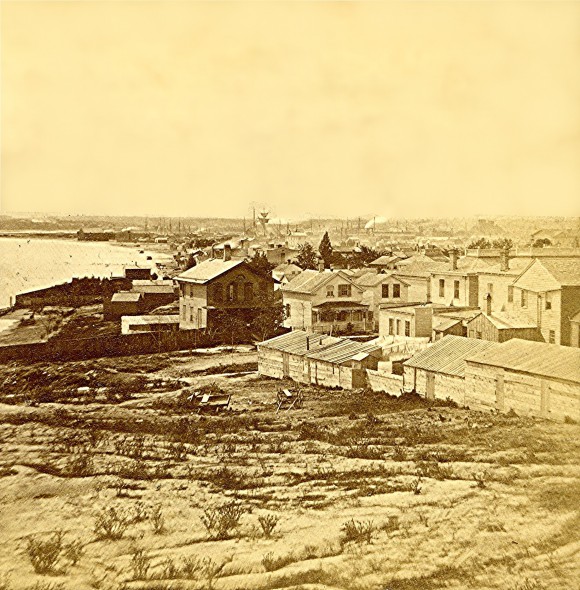 From the late 1870s until early into the 20th century Prospect Avenue became a prime place to build a mansion. Sadly, all too few of these grand residences remain today. But in earlier years properties with a Lake Michigan view were hardly prime real estate. The lakefront parks did not exist and the lake bluff was little more than eroded sand, thanks to fluctuating lake levels.

This is a view (circa 1868) of the eastern terminus of Mason St. The irregular sandy soil is in the foreground and the residences are all modest frame dwellings. Hardly a proper location for the likes of Alexander Mitchell and John Plankinton who lived west of Downtown. In the background glimpses of the village on Jones Island may be seen as well as the masts of sailing ships which were a common sight along the Milwaukee River back then. At the end of Wisconsin Street (now Wisconsin Avenue) there was a lighthouse but this was removed in the late 1850s. How times change. Today the intersection of Mason and Prospect is the site of Milwaukee’s most expensive residential real estate.