This attractive dwelling sat on the northwest corner of E. Wells and N. Van Buren streets for a century where it served as one of the key auxiliary buildings of the Cathedral of St. John the Evangelist, seat of the Roman Catholic Archbishop of Milwaukee.  It was built as a residence for the Brothers of the Holy Cross in 1892. At about the same time the bell tower of the Cathedral was rebuilt by architects George Ferry and Alfred Clas, and it might be a safe guess that they designed this home, too. It bears notable stylistic similarities to the nearby Woman’s Club of Wisconsin, an 1880s Ferry & Clas building located on the southeast corner of E. Kilbourn Ave. and N. Cass St., just two blocks south.

The Brothers moved out in 1895 and the Sinisawa Dominican Sisters moved in. Like the Brothers, the Sisters served as educators in the Cathedral school. The sisters made 630 E. Wells St. their home for a number of years, but by 1992 the building was occupied only by the church janitor on the lower level and the school custodian upstairs. Their days there were numbered, and so was the home’s, it seems. The Cathedral needed to expand its parking space, and the corner of the property, where the home stood, was the target.

By that time, Milwaukee had been sensitized to the issue of loss of its historic structures, and the Cathedral offered the building, on reasonable terms, to any group that would care to move it. This, of course, required finding a place to move the building, and here the City of Milwaukee stepped in. It offered a small patch of a city-owned parking lot south of E. Juneau Ave. that spanned the whole block from N. Marshall St. to N. Cass St. On January 12, 1994, with the adoption of Certified Survey Map 5935, a new address was created at 1122 N. Cass St., a 60 ft. by 120 ft. site, and plans were made to move the old convent two blocks to the east and three blocks to the north. The move was not merely physical, it was metaphysical, since the long-exempt residence appeared on the property tax rolls for the first time. Naturally the city was very willing to develop its surface lot to accommodate this.

The home had been purchased by the Wisconsin Preservation Fund for $159,000 in July 1994; the lot at about the same time, and by July, 1995 the home was on its new site. The home soon found new buyers in William H. Morley and realtor Jim Schleif. The property remains in Morley’s name.

By the time our heroes came to the rescue, the building had fallen into disrepair, for which we can blame either the nuns or the janitors. There might have been bats in the Cathedral belfry, but there were birds in the attic of this residence, along with “termite damage, carpenter ants and mice,” according to a May 2001 article in the Milwaukee Journal Sentinel. Fireplace surrounds were missing, and the place was generally in a shambles. But it had good bones. “Most[ly] original,” noted the assessor as he made his way through the city’s newest taxable property, wistfully observing, “the attic will probably have living space one day.”

Morley and Schleif moved into the home and did much of the renovating themselves, starting with the first floor. When that was in rentable condition, upstairs they went, plugging away at the old convent during spare hours, and finally getting it shaped up sufficiently to be a gay addition to the Historic Milwaukee, Inc. “Spaces and Traces” “Yankee Hill: New Perspective on an Old Neighborhood” tour  in 2001.

Morley told a reporter that if one were to have red walls in one’s dining room (Jim insisted on this), experience had taught them that oil, rather than latex paint, was the way to go. Wisdom for the ages.

Since then, the home has been used as a rental duplex, and Schleif and Morley have returned to their own home (itself a House Confidential-worthy East Side mansion).

The home has a total of 3,588 square feet of finished space, and 897 square feet of unfinished space (that attic, again!). It has a full basement, which as a result of the move is 100 years newer than the upper levels, and a steam heating plant for each apartment. The lower level has one full and one half-bath along with three bedrooms, while the upper level has just one bath and two bedrooms.  There is a 24 ft. by 24 ft. garage in the back yard, and a two-car parking lot as well. The remainder of the adjacent parking lot has since been sold by the city and is the home of City Green condominiums and apartments, which helped, along with this home, to remove a blight from the neighborhood and restore it to urban housing.

The Wisconsin Preservation Fund, which took care of moving this home, is still in business today, fulfilling its mission to “promote preservation of historic structures, reverse urban deterioration, revitalize urban areas and promote affordable housing through direct ownership and development of real estate and or providing loans and grants to entities or individuals who are furthering the same initiatives,” according to its IRS Form 990 for 2012. The organization certainly goes about its business in a quiet way; it has no website, for example, and it’s a safe bet that few Milwaukeeans have heard of it.  It helped provide funding in 2009 for Zilber Park, located adjacent to a building at the former Pabst Brewery owned by the group’s board member Charles Ilsley Trainer. 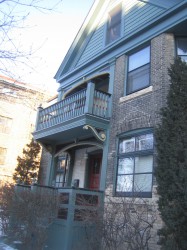 The new foundation may be discerned by the coloration of the brick.

The foundation is no minor entity, having brought in some $21 million in support from 2007 to 2011, and with assets of about $3 million as of 2012. It is headed by Atty. Bruce T. Block, who heads all sorts of things like this, including the UWM Real Estate Foundation, which is busy building in-town dormitories and the suburban UWM Innovation Campus, far removed from the main campus and now underway on an auto-dependent site in a sprawling section of Wauwatosa.

How Milwaukee is it? The residence is .7 mile from City Hall 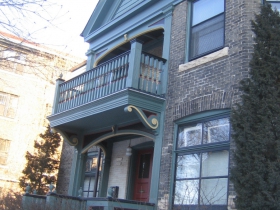 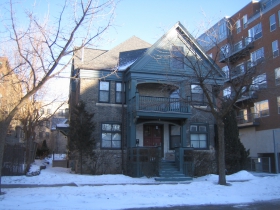 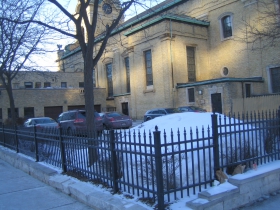 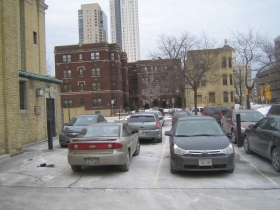 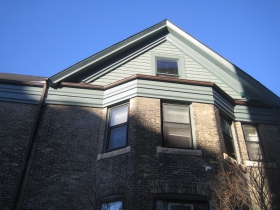 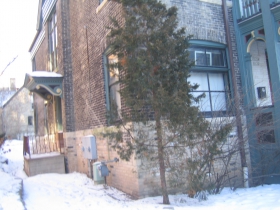