It’s a very early photo of Milwaukee, but the Iron Block building still survives from that era. 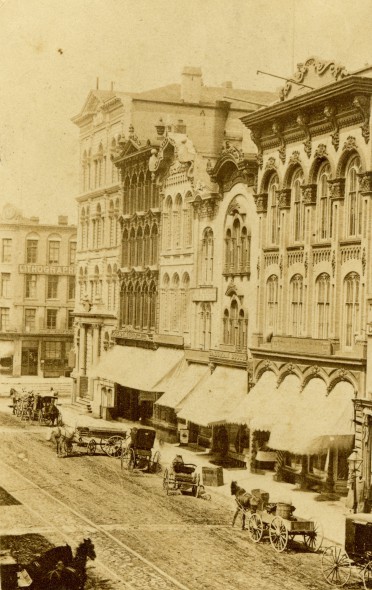 Most of the earliest photographic views of Milwaukee tend to be portraits of individuals. Among the earliest were daguerreotypes produced in the late 1840s until the early 1850s. These were replaced by “cartes de visite,” which were first created in France (hence the name) and became wildly popular in Europe. These tended to be small photographs, just a bit larger then two inches by four inches, mounted on a paper card. Again most of these were portraits but a few also were of outdoor scenes, such as this one.

This carte de visite is by the photographic team of Clifford & Hawkins, whose address is listed as 369 East Water Street. Today East Water Street is simply N. Water Street. What was once called West Water Street is now N. Plankinton Ave. This is a view of N. Water St. pointing towards where it meets with E. Wisconsin Ave. that likely was taken from the window of the photographers’ studio, circa 1858-60. The tall whitish building on the left (on the corner) is the Iron Block, which stands to this day. At the time it was called Martin’s Block. To its immediate right is the site of T. A. Chapman’s store which in 1872 would move to larger quarters on Wisconsin Ave. This was a magnificent block of mid-19th buildings, but unfortunately only Martin’s Block survives today.