The English Beat flew in from Britain to play and the turnout was great.

By Dave Schlabowske, Bike Federation of Wisconsin - Dec 5th, 2013 10:27 am
Get a daily rundown of the top stories on Urban Milwaukee 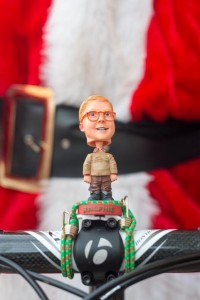 The hundreds of merry makers who pedaled holiday cheer around Milwaukee on Saturday’s 13th annual running of the Santa Cycle Rampage lucked into some perfect winter weather. I did not take the time to do an official count, but more than 150 holly jolly cyclists pedaled down to Lakefront Brewery with me from Cafe Hollander in Wauwatosa. Similar sized groups of Santas (herds?) rolled into the Lakefront from every corner of Milwaukee, as well as some from Iowa, Michigan and Minnesota.

I don’t know if it was the sunny skies and traces of snow still on the ground or if more people dressed the part, but this year the crowd had the strongest holiday vibe of any Rampage in recent memory. I’m neither a good singer nor am I religious, but I couldn’t help but sing along when the crowd outside the west side Cafe Hollander erupted into spontaneous “Happy Birthday” song when Jesus rolled up on his Pugsley. By the end of the day, my leg muscles felt fine, but my smile muscles were all worn out. 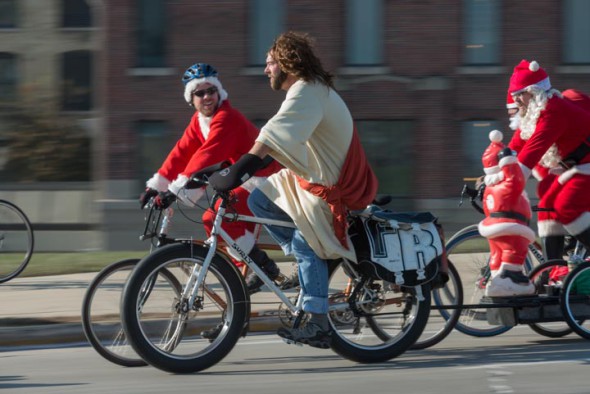 This was the first year the Rampage was anything more than a winter pub crawl. Early in the planning of this year’s event, some of our bicycle crazy friends who have businesses that have benefited financially from the Rampage asked if they could donate money to the Wisconsin Bike Fed. Never one to look a gift reindeer in the mouth, we said sure. The good folks at the Lowlands Group Restaurants took the lead and produced cool Santa Rampage Shirts and even brewed up a special batch of Santa Rampage Belgian Bier. Next thing we knew, Turner Hall was helping us book the English Beat and giving us a discounted rate on the show!  Of course, stalwart rampage stopes like Lakefront Brewery joined in to offer free beer and Guy Rehorst and the crew from Great Lakes Distillery donated $1 from every drink sold back to the Bike Fed. 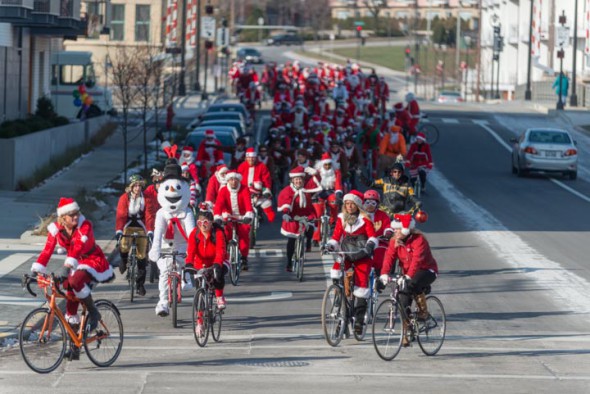 A personal favorite stop of mine is Kochanski’s Concertina Beer Hall, where Andy and his sister always lay out a spread of fireman’s chili and keep the place warm with Polka music. This year Vern and the Originals warmed up the crowd with hot polka-fied versions of classic Christmas tunes as well as more traditional four-step numbers. 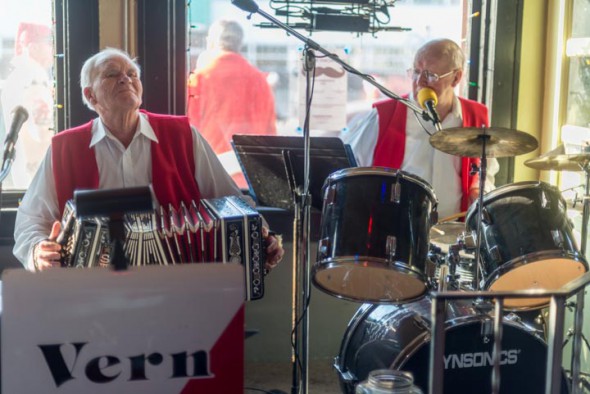 Vern and the Originals

The elves are still doing the math, but it looks like the event generated about $5,500!  Not bad for a first year fundraising event. We apologize to any of the feeder locations or alternate stops on the Rampage that were not part of the fundraising plans. This first year we just went with the “keep it simple” motto and limited the fundraising efforts since we didn’t know how well it would be received. Next year we will get the rest of the stops involved in the planning earlier. 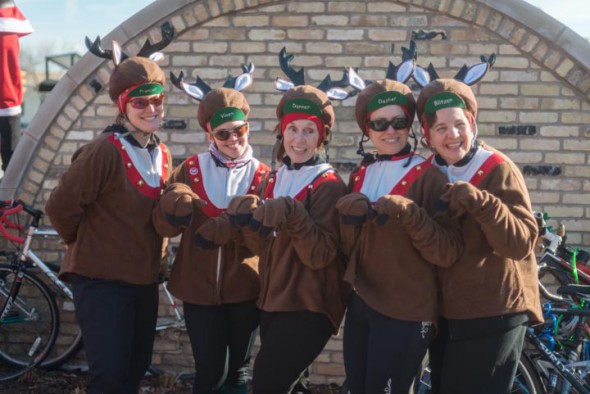 A group of reindeer made the ride. 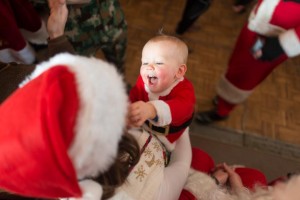 Fun for all ages.

Special thanks to the English Beat for flying in from Birmingham to help make this a ranking Rampage.  I’m old, but I’ve been skanking with you since the late 70s, and I’m not ready to stop!

Sorry if you missed all the fun on this year’s ride. You will just have to hold your holly until 2014, but in the meantime, you can look over our 2013 Santa Cycle Rampage Photoshelter gallery here: