North side program has taught some 400 people, helping meet post-recession needs in the industry. 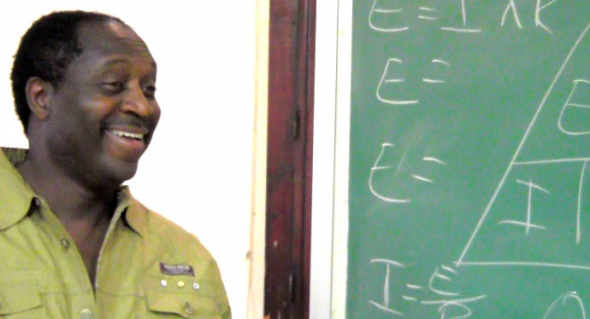 explains a mathematical formula in a class on electricity at St. Francis of Assisi Church. (Photo by Andrea Waxman)

Five years ago, retired teacher Ezzard Whitedesigned a training program to teach young men and women skilled trades, particularly in the areas of electricity and electronics.

“I decided I wanted to do something that will make a difference,” White said.

Because of the “Great Recession,” the time wasn’t right to begin the program. But things have changed. Experts expect a big boom in construction during the next 10-15 years.

In September, White began teaching the first module of nine in his survey course of skilled trades for the construction industry. Since then, about 400 students have gone through the basic and second-level electricity modules. Next up are blueprint reading, plumbing, welding, building construction, masonry, general drafting, carpentry and HVAC (heating, ventilation and air conditioning). More than 1,000 people have applied for the program, which runs for 24 weeks.

One challenge White faces is a lack of workshop space, which would enable him to provide hands-on training. For now, he teaches classes in theory and demonstrates the skills. He is waiting for action on a proposal he submitted to the MPS board to use space at North Division High School, which he said has been met with enthusiasm from some board members and Mayor Tom Barrett. 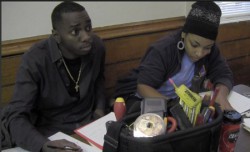 “One Hope Made Strong” students take a test in Ezzard White’s class at St. Francis of Assisi Church. (Photo by Andrea Waxman)

When he looks around his community, White said, he sees a lot of smart young men and women who need employment but lack skills. “I can accommodate them with the skills that I have and the experience that I have,” he said. He underwrites the costs of the program himself and does not charge students any fees.

With the German scientist George Simon Ohms in mind, White built on his theme of hope in naming the program One Hope Made Strong or OHMS.

Students who complete the program will receive a certificate of completion, which may lead to acceptance in an entry-level position in a trade or to BIG STEP  (Building Industry Group Skilled Trades Employment Program), an industry sponsored pre-apprenticeship tutoring program, or another training program.

OHMS can fill a gap for central city residents, says Randy Crump, the CEO of Prism Technical and a supporter of OHMS’ mission. Among the challenges these residents face are schools that don’t offer industrial arts courses and parents who rent rather than own homes. Consequently, they lack basic experience with tools and home repairs, which leaves them at a disadvantage when applying for pre-apprenticeship training, Crump explained.

“In many of the trades, the first line of questioning in an interview to enter the training is ‘what have you built?’ ‘What tools have you used?’ So you’re eliminating probably 80 percent of Milwaukee’s impoverished people,” Crump said.

White also provides a hand up to students by teaching about employers’ expectations in the industry, Crump said.

OHMS models a workplace environment by insisting on promptness and regular attendance. Volunteer assistants verify attendance with a photo ID at every class. Only one excused absence is allowed.

John Bzdawka, business manager at the Electrical Workers Union, Local 494 and Jeff Leckwee, director of the Bricklayers & Allied Craftworkers District Council of Wisconsin responded positively to OHMS’ mission. Though neither had heard of the program, both said they would be interested in considering people who had completed it.

“We are going to need people coming into the trades. Any kind of initial help to get them in is great. We have, of course, an apprenticeship program but there are minimum qualifications to get into that. You have to have at least high school algebra,” Bzdawka said.

Crump said Milwaukee is poised to come back from a 40-50 percent decrease in construction jobs between 2008 and 2012. He emphasized that central city residents should prepare now to participate in rebuilding and replacing workers who left the city when there was no work.

Pastor Teresa Thomas-Boyd of Matters of the Heart Christian Ministries heard Crump speak at an African-American Chamber of Commerce meeting. She sparked the launch of OHMS when she connected him with White. She also carried Crump’s message to clerical and other friends. St. Francis of Assisi Catholic Church, 1927 N. 4th St., and the Inter-Denominational Church of the One Lost Sheep Foundational Ministries, 2567 N. 8th St., offered space for White’s classes in their buildings.

Crump projects at least $2 billion in downtown construction during the next 10 to 15 years, excluding home building and small complexes. He cited construction at Northwestern Mutual’s new headquarters, Couture, 833 East and the Hoan Bridge, as well as a potential new Bradley Center and, possibly, a streetcar system. “There are several [additional] $100 million projects that are potentially in the mix,” Crump said.

OHMS participant Leon Smith started doing construction work in concrete at 17. He later learned some electrical, plumbing and carpentry skills. He said that it’s been tough finding employment, especially since he has been incarcerated. He is now working primarily as a forklift driver with some independent home improvement work on the side. He hopes to increase his income through higher-paying construction work after completing White’s program.

“I would like to support my kids better and own my own home,” he said.