By Bill Lueders, Wisconsin Center for Investigative Journalism - Nov 26th, 2013 02:05 pm
Get a daily rundown of the top stories on Urban Milwaukee

Areas of broad agreement in the Wisconsin Legislature are hard to find. One exception: a bill to expand state tax credits for restoring old buildings.

No one spoke or registered against the legislation at public hearings. More than a dozen lobby groups representing Realtors to labor unions gave it thumbs up; none was opposed. It passed on votes of 88-4 in the Assembly and 31-2 in the Senate.

AB 4 of the October Special Session, which Gov. Scott Walker has praised and plans to sign into law, creates a state tax credit equal to 20 percent of the cost of rehabbing certified historic and pre-1936 buildings. The current, more limited credit is 10 percent, raised from 5 percent in the most recent state budget. That’s a four-fold increase in a matter of months. 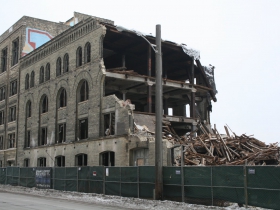 Might the increased tax credits have allowed buildings like the Gallun Tannery or Schlitz Brew House to be saved from the demolition ball? Photo by Jeramey Jannene.

The credits are transferrable, meaning they can be sold to other businesses with income tax obligations. They come on top of federal income tax credits of 20 percent for certified historic buildings and 10 percent for other pre-1936 structures. Thus up to 40 percent of a project’s renovation costs can be secured in credits, possibly along with other government subsidies.

The state Department of Revenue estimated the expansion would cost $3.9 million a year, but that was based on usage levels when the state’s credit was 5 percent. If a fourfold increase means more projects happen, as proponents say, the cost borne by other taxpayers could be much higher.

Many other states already have credits of 20 percent or higher, but often have annual or per-project caps. Wisconsin lawmakers rejected an upward limit, but agreed to let the Wisconsin Economic Development Corp., a quasi-governmental agency, approve the credits.

Lead Assembly sponsor Rep. Chad Weininger, R-Green Bay, said the bill would help the state compete for investment dollars and give municipalities a tool to “rebuild their aging downtowns, main streets and waterfronts.” Sen. Rick Gudex, R-Fond du Lac, envisioned “a more beautiful and enticing Wisconsin, and a greater hold on our own past.”

The handful of no votes were all Republicans, concerned about the credits’ cost and transferability.

Mike Mikalsen, an aide to Rep. Steve Nass, R-Whitewater, estimates the program could run $50 million to $100 million annually. “That was something Steve was really opposed to, with the state having a $750 million structural deficit,” he says.

Adds Sen. Neal Kedzie, R-Elkhorn, one of the two Senate no votes: “There were no caps or limits for the WEDC to review or say, ‘We’ve hit a ceiling here.’ ”

Also voting no was Sen. Glenn Grothman, R-West Bend, who says: “Maybe I’m a dinosaur, but there was a time when people paid for their own buildings.” He’s surprised Democrats were uniformly on board, since “the credits will almost exclusively cut the tax burden of the very rich.”

Grothman notes that other worthy rehab projects, like the Pabst Brewery in Milwaukee, occurred with only a 5 percent state credit. He says a 20 percent credit, besides other subsidies, creates “a situation where developers have virtually no risk and can just increase their wealth exponentially.”

But Joe Alexander, president of the Alexander Co. of Madison, which has done rehab projects in multiple states, says the higher credit is needed to raise equity for these highly labor-intensive undertakings.

Moreover, he argues, the projects spur jobs and economic growth. In the first year after Minnesota raised its state credit to 20 percent, a 2011 study found, $49 million in tax credits “leveraged” $450 million in economic impact.

Grothman calls for scrutinizing how the credit is used “as to whether it is unnecessarily generous,” causing more drain than gain.

The bill as passed requires state officials to prepare a report for the Legislature in mid-2017 “describing the economic impact of the tax credits” and recommending whether they should continue.