Norman Moses on being Groucho

The Milwaukee actor reprises his recurring role in "Groucho: A Life in Revue," a tribute to the Marx Brother being staged at Next Act Theatre. 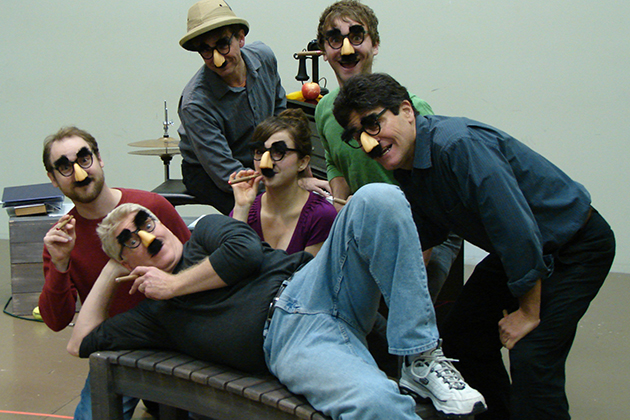 The cast of “Groucho: A Life In Revue” with Norman Moses (front center)

This Thursday, the NextAct Theatre opens Groucho: A Life In Revue, a somewhat biographical take on the beloved comedian. Playing the title role is actor Norman Moses. TCD staff writer Gene Cawley sat down with Moses in advance of the show’s premiere to talk about becoming Groucho.

Gene Cawley: Is this your first time playing Next Act at its new location? How do you like it?

Norman Moses: No, actually, this is my third show. We did the It’s a Wonderful Life Live Radio Show last December, and Irma Vep this past spring.

I think the new space is great. I really like it a lot. Not only do I like the space itself, it’s maintained the same feel as the old space, and it’s pretty much the same dimensions. They added 50 more seats than the old house, so they have 150 seats now. And there’s a big backstage area. There’s just a lot more flexibility and more options available to them visually. The old space used to have two pillars on the downstage corners of the thrust, so you always had to block around those pillars. The rest of the space has a really great rehearsal hall, and the lobby is this nice, big open space, and it’s really great for having events. So I think they did a really nice job.

GC: I believe this is your fifth time playing Groucho?

NM: Correct. I know, you see my headshots and you say, “This guy doesn’t look anything like Groucho!”

GC: Well, neither did Groucho, really.

NM: [laughs] Well, I’ve been a big fan of Groucho, as well as the other Marx Brothers since I was in my mid-to-late teens. There was a Marx Brothers Film Festival at Plymouth Church, which is kind of close to the UWM campus. I’m not sure I’d even seen a Marx Brothers film, but every week they would show a different film of theirs and I just fell in love with them. I particularly related to Groucho because my sense of humor is very similar to his, and I’m sure that watching him further shaped my sense of humor. The wordplay, the overall sauciness. They were insults, but in such a ridiculous way, it’s hard to take too much offense. 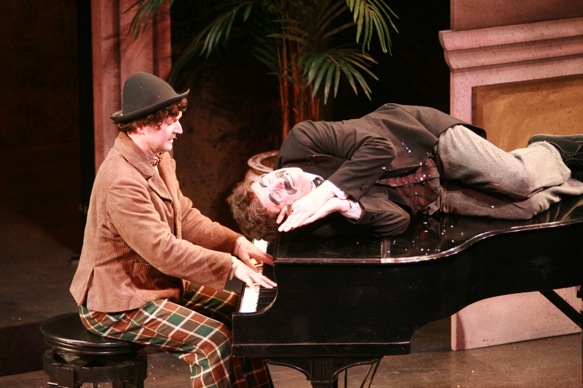 Norman Moses (R) last played Groucho in the Skylight’s “A Day in Hollywood/A Night in the Ukraine,” seen here alongside Benjamin Howes’ Chico.

GC: Does this show present a challenge as far as portraying Groucho’s entire lifespan?

NM: Well, it is. When it starts, he’s a young kid. So, it’s Groucho without any of the greasepaint, just him and his brothers. For me, the struggle is finding the sound. My voice is a little different than his. So, trying to do a dead-on impression has never been my goal. The most channeling thing for me is the timing, and certain qualities of his voice. It’s definitely being filtered through Norman Moses. It’s really a combination of the two. In this show, he goes through many years of change. At some point in Act One, I put on the brow and mustache greasepaint and become more the archetypal Groucho character. In Act Two, it’s the You Bet Your Life-era of his career, his middle-age career, when he finished making movies. At that point, he grew a real mustache. He was being more himself, it wasn’t quite as frenetic as his cinematic persona. That’s kind of the tricky part, keeping that Groucho Marx quality, yet finding the different levels of it. And then toward the end of the show, he’s an old man.

NM: It’s amazing. His wit remained razor-sharp, even into his early 80s. There came a point, in the last few years of his life, when he started experiencing ill health and became quite a bit more frail. But his mind remained pretty sharp. When you see those Dick Cavett interviews, he’s still right on the money.

The challenge in the show for me is, again, playing that age and finding his voice. It changed a quite a bit when he got older. That’s the thing that I’m struggling with the most at the moment, finding that voice and not trying to do an impression. It is a different rhythm, and it’s a slightly different pace. Not quite the energy he had as a young man. I mean, those guys were incredible. All the times I’ve played Groucho, having to do those musical numbers and then do these incredibly long verbal bouts right after all the singing and dancing. You just think, “Boy, these guys were in good shape!” They had really this incredible stamina. When they first made it big, they did The Cocoanuts, their first Broadway show. Then they closed that and opened Animal Crackers on Broadway while, at the same time, filming the motion picture version of The Cocoanuts. So, they would be on a movie set all day and then go do their Broadway show at night. It’s remarkable the stamina they had back then. We actors today are just lazy with our microphones, etc. And they were playing in these huge houses with no real amplification, singing over big orchestras. It’s just amazing how they were able to do that.

GC: What’s next for you after Groucho?

NM: We’re bringing back the It’s a Wonderful Life radio play after Groucho closes. It was so popular last year, Next Act brought it back.

Then I have a couple of months off before going to Madison. There’s a newer company in Madison called Forward Theater that everyone should check out. The Madison Repertory Theater was the one professional company in Madison, and they went under about four or five years ago. The problem with the Madison Rep toward the end was the leadership talking down to the community a bit. Their attitude was like, “We’re gonna show you what real theater is.” And the community, largely because of this attitude, lost interest in them. Forward Theater are going about things in a very smart way. They’re really trying to involve the community. They have talkbacks after every performance. So they’re really trying to develop this direct relationship with their audience. It’s a great group of people. I’m doing a show there in end of February called Or, by Liz Duffy Adams. It’s a three-character play.

I do a lot of different things too. I do voiceovers for radio and television. That’s sort of a constant thing. I also have a little side-business that I’ve been doing for about 15 years, I prepare tax returns for other people in the industry. I’m kinda like the go-to guy in town. I kinda fell into it.

I’ve always been obsessed with my own tax returns. Performers’ taxes are very complicated because they work for a lot of different people, in a lot of different states. Plus, there are a lot of unusual deductions that people in other industries can’t take. There’s a lot of confusion. So, I was always so paranoid about my own taxes that I really made an effort to learn about it, took some classes and worked for an accountant for a couple years. Then people started asking me to do their taxes, and it just kind of developed into this business. I have about 65-70 clients. I don’t charge a lot, because if you see what artists make…[laughs]  It’s a little altruistic on my part. I just educate them to help them hang on to what money they do make. Try to encourage them to invest and do IRAs. A lot of artists don’t even think about things like that. Some of these people are in their forties and fifties and haven’t put any money aside for retirement.

I don’t openly solicit clients these days because I have just enough, and I’m usually in a show during tax season. But I do like to encourage everybody to think about those kinds of things. There’s such an intense phobia of the IRS and tax returns, so they just ignore it and don’t do them. I’ve had dozens of clients where I had to do 4-7 years of back returns because they just couldn’t face it. … A lot of people are like, “You know, my life at that time of year is so stress-free because you’re doing my taxes.” So, that’s very satisfying. I feel like I’m really helping people.

GC: And my final question: Why a duck? Why-a-no chicken?

2 thoughts on “Norman Moses on being Groucho”