WNOV-860 has been the only African-American-owned radio station that programs talk in Wisconsin since WMCS-1290 changed formats in March and took Eric Von off the air. Originally, Hughes’ show ran two hours, from 9 a.m. to 11 a.m., but was expanded in September to end at noon.

Hughes, known as a progressive voice in Milwaukee, said that expanding the show would allow the station to gain more support to compete with conservative talk radio.

In addition, WNOV has started airing an hour-long talk show on Mondays hosted by former Assemblywoman Annette Polly Williams.  Rev. Al Sharpton’s nationally syndicated show is broadcast from noon until 3 p.m. Tuesday through Friday.  The station also plans to start a drive time talk show from 3 to 6 p.m., according to Hughes. 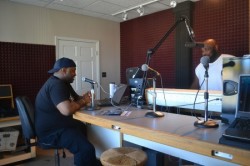 Sherwin Hughes (left) is on the air at WNOV. (Photo by Tom Momberg)

WNOV, established in 1967, is owned and operated by Courier Communications, which also produces the “Milwaukee Courier,” a weekly newspaper and digital product. “Before I was even in politics, or even before I could walk, WNOV has been doing work in the community,” said Sen. Lena Taylor. “It is ‘the voice;’ it has been, and it continues to be.”

Media outlets that are owned and run by minorities help address the unequal distribution of power in society, said Erik Gunn, who reports on Milwaukee media for Milwaukee Magazine.

However, the number of black-owned radio stations decreased in 2013, according to Pew Research Center, and African-American personalities including Warren Ballentine and Michael Baisden went off the air. Nevertheless, Hughes said he is confident “community radio will always persist, because I think this is still where the vast majority of our community gets their information.”

Hughes said he liked it when Von was on the air because African-Americans had two local options for news and talk. Nevertheless, the format change presented Hughes and WNOV with an opportunity, and they are trying to capitalize on it.

WNOV has not shown up on Arbitron ratings of market share, presumably because its listenership is too small to measure.

Hughes began at WNOV as a fill-in host one day last spring. The station received calls from people who wanted to hear more from him, he said. “I was asked to come back a month later and I had my own show,” he said. It began airing in July 2012.

A former political consultant, Hughes has stayed involved in politics, which he said gives him something to talk about on the radio every day. He said he listens to conservative radio and reads the city and community newspapers to come up with topics. 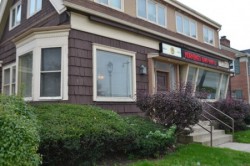 WNOV’s talk radio is broadcast from a studio at Capitol Drive and 20th Street. (Photo by Tom Momberg)

Hughes, who owns a home in the community he broadcasts to, said everyone has a duty to serve. “As long as I am a part of this community I think it is my duty to make it as safe, smart and as wealthy as I possibly can,” he said. “I found a great opportunity to provide that service.”

Hughes grew up in Brown Deer after his parents moved there from Milwaukee. He said he felt cut off from African-Americans in the city while he was growing up. He went to college at UW-Milwaukee, and graduated in 2000 with a degree in sociology.

Hughes worked at the YMCA as a community organizer after college, and then on Tom Barrett’s 2002 gubernatorial campaign. After Barrett lost in the primary, Hughes started coordinating after-school programs at South Division High School, 1515 W. Lapham Blvd. He ran his own campaign-consulting firm before joining WNOV.

“When I met (Hughes), he seemed to be an amazing wealth of knowledge about the parties and the party system and their strengths and weaknesses,” Taylor said.

She added that Hughes energized individuals in the African-American community to be engaged in politics through his outreach work. “I saw that in him early on. When I got in a position where I needed somebody for community outreach and communications, I immediately thought of Sherwin, and brought him in on my board,” she said.

Hughes also works for the Black Alliance for Educational Options (BAEO), which focuses on education policy.

“One of my loves and passions has always been education because I think that it gave me the background to be successful. It doesn’t predict your success, but I think that it gives you tools that are necessary,” he said.

Hughes has had Barrett, Taylor, Alderwoman Milele Coggs and many others on his show to discuss education. “One of the things I do with the show is I feature elected officials that have a strong sense of education being the great equalizer,” he said.

He said getting large corporations, advertisers and sponsors to see the value in community radio is challenging. “African-Americans have national spending power of a trillion dollars, and companies don’t take advantage of community media as often as larger outlets for advertising spending.”

Hughes noted that community radio is critical because mainstream media tend not to cover the central city, but there is an audience for this type of coverage.

“I believe it’s a common misconception that African-Americans don’t consume news,” Hughes commented. “We are tremendous consumers of media.”