Why a Regional Tax is Needed

A regional tax for amenities like Milwaukee’s zoo and art museum is needed. Will they benefit from effort to help the Milwaukee Bucks?

Up until the 1960s the Milwaukee Public Museum was a city institution, financed by Milwaukee taxpayers. Recognizing that many of its patrons came from beyond the city, local governmental leaders agreed to transfer the museum from the city to Milwaukee County and its broader tax base.

Logically, as suburban sprawl continued, it would have made sense to create a metropolitan tax of some kind to support the public museum. Today, just 44 percent of the museum’s patrons come from Milwaukee County, with the rest coming mostly from other areas of Wisconsin, particularly Waukesha, Ozaukee, Washington and Racine counties. Yet the only tax support comes from Milwaukee County, which continues to provide $3.5 million in annual operating costs, even after the museum became semi-privatized.

Or consider the Milwaukee Symphony Orchestra, which has for years performed at the Marcus Center for the Performing Arts, which gets about $1 million in annual support from Milwaukee County, thereby lowering the cost of rent for the symphony. For years the MSO also got funding from the county arts fund, which was eliminated year ago.

But the symphony is not a Milwaukee County institution. Its own analysis of ticket buyers shows it draws heavily from six zip codes in Waukesha and Ozaukee counties, from Mequon, Thiensville, Brookfield, Menomonee Falls, Pewaukee, New Berlin and Elm Grove. It also has lots of fans coming from Racine County. But no tax support comes from any of these places. 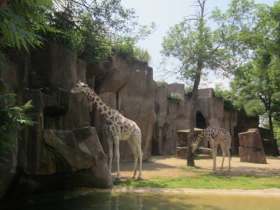 Giraffes at the Milwaukee County Zoo. Photo by Alison Peterson.

Beyond the question of who benefits from these amenities, there is also the question of the prestige they bring to the Milwaukee metro area. Companies help recruit executives here not just by noting the presence of major league ball teams, but by selling its major league status culturally. The Public Museum has had a national and even international reputation for the quality of its exhibitions, the symphony has toured internationally to great acclaim, the zoo in considered one of the nation’s best and the art museum’s Calatrava addition is an international calling card.

Most business leaders are well aware of all this, yet the Metropolitan Milwaukee Association of Commerce has never shown any interest in finding regional support for the state’s foremost symphony orchestra, zoo, natural history museum or art museum. (And to that list we could add the state’s foremost ballet and opera companies and foremost theater, the Milwaukee Repertory Theater.)

But now, in the latest effort to find some way to build a new NBA arena for the Milwaukee Bucks, the MMAC has created a Cultural and Entertainment Capital Needs Task Force, whose 48 members were announced last week. The task force will look at whether the 25-year-old BMO Harris Bradley Center needs to be replaced, but also at the needs of other Milwaukee amenities, including the zoo, public museum, art museum and Marcus Center.

The emphasis is on facilities. Thus, even though the Bradley Center works quite well for its other tenants, like the Milwaukee Admirals and the Marquette Golden Eagles, and only needs to be replaced in order to generate more revenue for the Bucks, those pushing for its replacement try to maintain the fiction that this is all about upgrading a community facility. Going with that theme, any funding for a group like the symphony, which does have a representative on the task force, would only come indirectly through its performances at the Marcus Center (or might be used to help the symphony build its own hall, a long-discussed project that was put on hold once again in light of the symphony’s current financial problems).

I do attend arts events in Milwaukee but am also a big fan of NBA basketball. I’d certainly hate to lose the Bucks. But when it comes to a regional tax of some kind, two things are worth noting. All of the regional attractions the task force will look at are non-profits that governments have traditionally supported, with the idea the benefits go to the surrounding community. The Bucks are a for-profit company whose value and profits will rise significantly with a new arena, yet none of that money will go to the taxpayers. The bailout for the Bucks will benefit a millionaire owner and millionaire ballplayers. Subsidies for the zoo or symphony or museum go to non-profits that pay very low salaries.

I can hear sports fans replying, yes, but the Bucks have a big spin-off in terms of dollars spent on restaurants and bars and some hotel nights. The reality is that if you added up the symphony and art museum and zoo and all the other non-profit cultural institutions in Milwaukee, their total attendance would dwarf that for the Bucks. And yes, these audiences do spend on restaurants and the like. (I might add that over the last 20 years, these groups have had a much higher winning percentage than the Bucks.)

Finally, one other major difference: these cultural groups have far smaller needs and would deliver more bang for the buck than the Bucks. Yet everyone knows the vast majority of any money raised by this task force will go for a new NBA arena. (And that won’t be easy to do, as I’ve previously reported.)

Back in 1988, the citizens of metro Denver passed a referendum by a three-to-one majority creating a six-county regional sales tax of just one-tenth of one percent to create a Scientific and Cultural Facilities District. About 75 percent of the money provided regional funding for the Denver zoo, art museum, botanical gardens and the Denver Museum of Nature and Science, with 25 percent of the money going to the six counties who distribute it to smaller cultural groups. Yet the campaign sold the tax by emphasizing the most popular attraction, the zoo.

The MMAC, however, is looking more towards the Oklahoma City model. The city used a one percent sales tax to raise $2 billion to build an NBA arena and pay for other civic improvements. As Rich Kirchen and the Business Journal reported, this has been the model for MMAC leader Tim Sheehy.

My guess is that any regional tax will be a tough sell, but more citizens would probably be interested in saving the giraffes at the zoo than the those playing for the Bucks.

With that in mind you can expect a lot of discussion of two revenue sources, including the five-county Miller Park stadium tax. As one stadium district insider predicted to me, the tax will never sunset. Civic leaders know how hard it was to pass a tax like this, and will do everything to keep it going, I suspect, if only to make sure the Brewers stay here forever. Some would also love to find a way to extend it to the Bucks. And only the legislature, not the counties who pay for it, can kill this tax.

Meanwhile there are two ongoing studies that will be very relevant to this discussion. The Public Policy Forum will soon finish a study of the needs and impact of Milwaukee cultural groups, which will likely provide information that could help create a campaign for some kind of regional funding. And Visit Milwaukee and the Wisconsin Center District are co-sponsoring a study of the convention center and the impact of expanding it.

I’ve long been a skeptic of a Bucks’ bailout, but such an effort would be far more palatable for me and others if it included other important Milwaukee attractions.

The good news is that the MMAC task force looks fairly broadly based. And the PPF and Wisconsin Center District studies will provide information that will allow the broadest possible look at this issue. With the right structure and the right funding, Milwaukee could become a regional powerhouse when it comes to cultural and entertainment venues. But it will require inspired leadership from business leaders living beyond the county to help sell this campaign regionally.

34 thoughts on “Murphy’s Law: Why a Regional Tax is Needed”