Ghost Bike with a Message

By Dave Schlabowske, Bike Federation of Wisconsin - Oct 25th, 2013 10:35 am
Get a daily rundown of the top stories on Urban Milwaukee 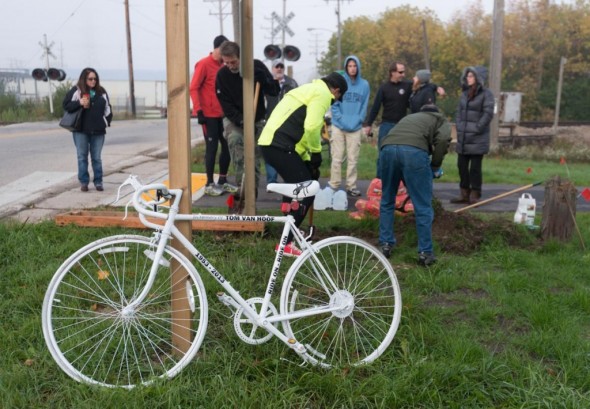 Friends and family members of Tom Van Hoof dig a hole for the concrete foundation where they installed the Ghost Bike at the intersection of the Oak Leaf Trail and Mill Road in Glendale.

The fog and chilly temperatures made for an introspective Sunday morning when friends and family members of Tom Van Hoof gathered to install a Ghost Bike near the intersection of the Sydney Place and Mill Road where Tom was killed in a crash July 18th. More than the traditional memorial, the Tom’s riding pals would like everyone who passes this Ghost Bike to take two seconds for safety. If you are on a bicycle, thing of Tom and take an extra two seconds to look down the road before you cross. If you are in a car, take an extra two seconds to look for people on the trail who might cross. 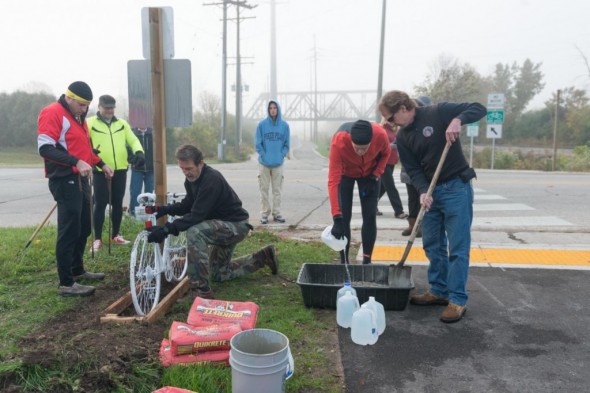 Tom Verstegen sets the Ghost Bike in the forms while others mix concrete.

Tom was killed riding home with friends at about 10 p.m. on the  newly paved portion of the Oak Leaf Trail. Van Hoof was riding on with a group of friends as part of a regular Thursday night Silver Creek Ride. Van Hoof was traveling southbound on the newly paved trail when he was hit at the intersection with Mill Road by a motor vehicle heading eastbound on Mill Road, according to a Milwaukee County Medical Examiner’s report. The report also notes Van Hoof had lights and was wearing a helmet. 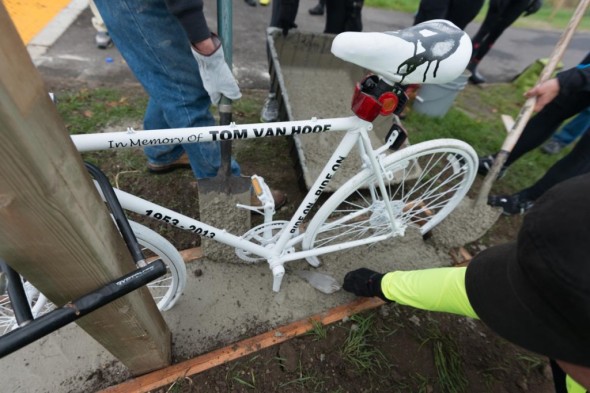 The Ghost Bike is set in a concrete foundation and locked to the trail sign. 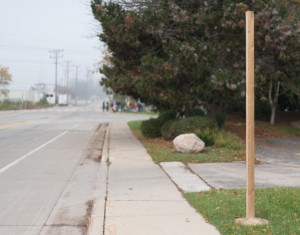 I have contacted Milwaukee County Parks to let them know the advance warning signs for the trail crossing have still not been installed, even though the trail is open.

Police are still investigating the crash, and I do not yet have the MV4000 crash report, so I cannot report on any further details or possible charges. At the time of the crash, the trail, although paved, was not officially open yet. There were still barricades up at the intersections, and they have not put stop signs up on the trail yet, nor were the advance trail warning signs up on Mill Road

The trail crossing is on a slight rise, and there are some trees and bushes that limit the sight lines for trail users heading south and people in cars heading east. 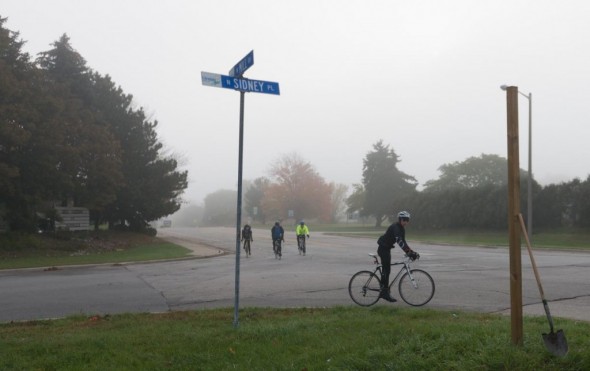 You can see where the shovel is leaning against a post, that the trail crossing signs right next to the trail have not yet been installed to alert drivers on Mill Road of the intersection with the bike path. 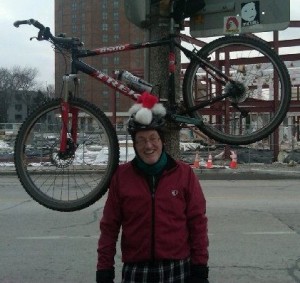 This is the smiling face that I will remember when I think of Tom Van Hoof. Photo by Roger Schneider.

Family members had asked at the funeral that in lieu of flowers, people send memorials to the Wisconsin Bike Fed. We did get a number of checks, are we are planning to have a Take Two for Tom bicycle safety class in the Spring. We are just now putting together our 2014 class schedule. We will have a blog post and email alert when our class calendar is up.

I knew Tom Van Hoof as one of the fellow merry makers on the Santa Cycle Rampage. Tom Held knew Van Hoof better than I did, and he wrote an excellent story on his blog The Active Pursuit that typifies the generous and friendly spirit for which Van Hoof was so well known. Read more from Held’s post here.

In the meantime, please be extra cautious at intersections where trails cross roads whether you are on a bike, on foot or in a motor vehicle. 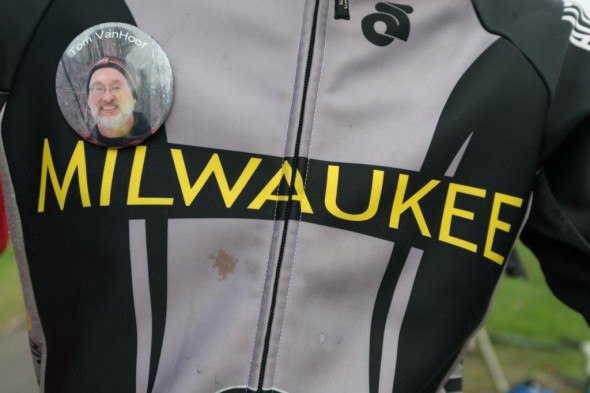 This is the smiling face that I will remember when I think of Tom Van Hoof. Photo by Roger Schneider.