Celebration Saturday of newest part of trail whose origins go back more than a decade.

By Dave Schlabowske, Bike Federation of Wisconsin - Oct 11th, 2013 10:13 am
Get a daily rundown of the top stories on Urban Milwaukee

I would like to invite you all to the ribbon cutting for the Kinnickinnic River Trail, tomorrow, Saturday Oct. 12th at 1pm. If you live in the area, please pedal down to 6th and Rosedale to join me, Mayor Tom Barrett, and other city officials and community advocates to formally open Milwaukee’s newest trail. The Kinnicinnic River Trail is already getting plenty of use, but this long-awaited addition to the City’s bikeway network deserves a great birthday party. 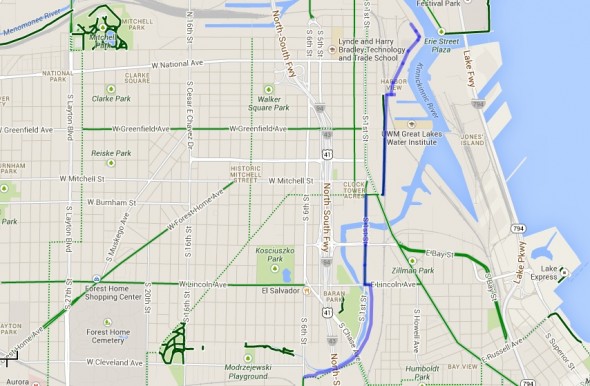 Click on the image to view in the map I created in Google Maps. 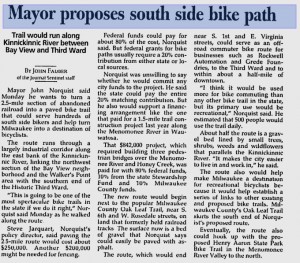 The section of the trail east of S. 1st Street, from Maple to Washington, has been open since May. The latest off-road portion of the trail, from S. 1st Street and Lincoln Avenue to S. 6th Street and Rosedale Avenue, which includes a new bridge over Chase Avenue, completes a project I worked on when I was Bicycle and Pedestrian Coordinator at the City of Milwaukee Dept. of Public Works. In total, five DPW engineers managed that project, which first received funding back when John Norquist was mayor! 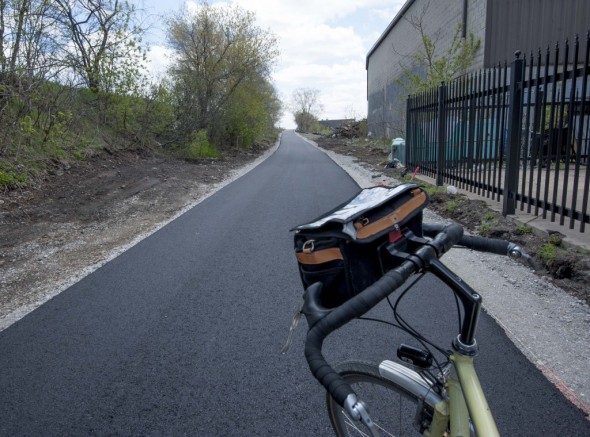 The trail goes on street and makes use of the bike lanes on the recently reconstructed S. 1st Street between Maple and Lincoln.  The railroad right of way in that section was purchased by a private developer before the City could buy it. Southwind Marine now owns that.  A long time ago the City had some discussions with the owner about routing the trail through or around his boat operations, but that is not likely to happen any time soon as the old deteriorating RR bridge over Becher Street was removed.

Smooth concrete and newish bike lanes on S. 1st Street make a decent on-street connection for the trail where the ROW is in private hands.

As you can see in the photos below, good things come to those who wait. The new trail is a great addition to our local bikeways, and adds even more access to the KK River, which is also undergoing a bit of a rejuvenation as Milwaukee Metropolitan Sewage District removes the concrete lining and restores the natural riparian edges. 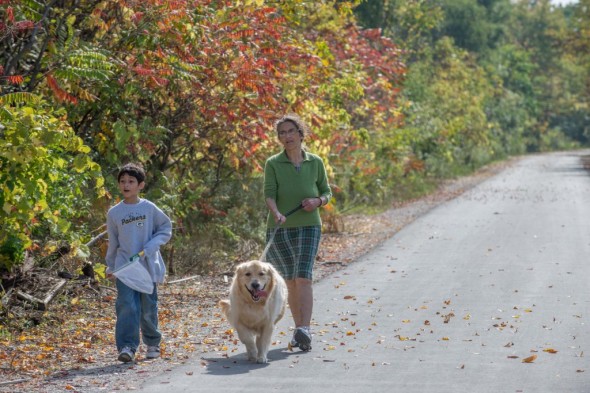 The old, abandoned railway corridor has been transformed into a beautiful green space great for transportation and recreation. 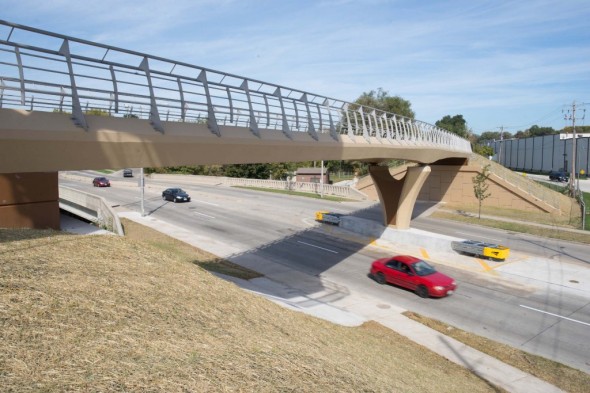 The old railroad bridge was removed when Chase Avenue was widened during reconstruction about seven years ago and replaced with this new poured-in-place concrete bridge.

A path was built under the newish 6th Street Bridge just north of Rosedale so the trail can continue west as the MMSD continues to remove the concrete lining. MMSD has already begun buying and removing homes in the floodplain upstream, as part of a separate $49.9 million flood control project. Up to 83 structures are targeted for removal in the next several years to provide space for widening the stream channel and eliminating flooding in that section of the river. 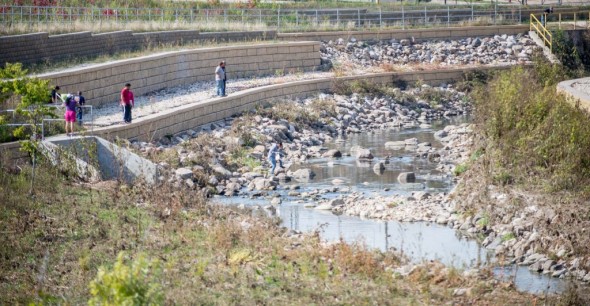 Passersby watch salmon run up stream where concrete lining was removed from riverbanks all the way up to the 6th Street Bridge.

I hope you can join me for the celebration. There will be refreshments, live music, kids activities and tours in addition to the ribbon cutting and the speeches by officials. I’m not sure I’ll be the guy with the scissors, but I have been promised a couple of minutes at the mic, so bring your hook. 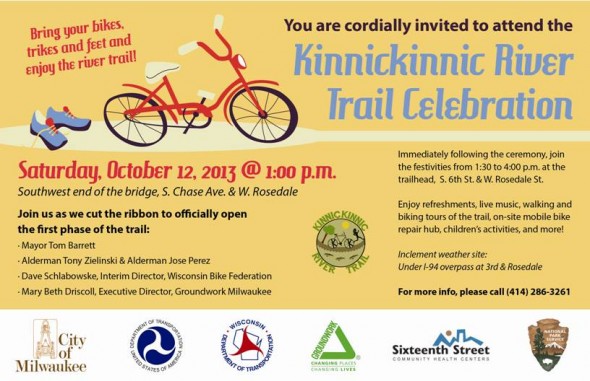 The official invite from the City.