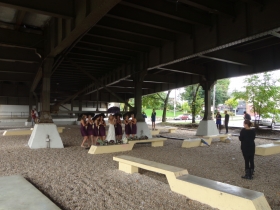 Wedding photos under the Marsupial Bridge. Photo by Michael Horne.

What once was swung is now unhung. As of Wednesday, October 9th, only two swings remain at the  south end of the Marsupial Bridge, while the issue of maintaining them goes back and forth between the swings’ creators and the city.

The swings were installed in September 2012 by a group of activists led by Keith Hayes. [See Urban Milwaukee: The Holton Bridge Swings.] They were hung from the underside of the Edward D. Holton Viaduct and immediately animated the space. In the ensuing year, the swings were used by families with children, young lovers and some particularly athletic gymnasts — people of all sorts, including many unaccustomed to hanging out under a bridge. There have been plays, dances, concerts, films and art performances regularly held there. Every bicyclist in town knows it.

It has been a popular destination for wedding photographs since satin gowns contrast so nicely with the vigor of Milwaukee Socialist bridge designs.

Yet on Saturday, October 5th, 2013, while not one but two wedding parties posed for photographs there, some wondered aloud, “Who took down the swings?”

It turns out some were taken down by the city, and others were removed, as a form of protest, by the people who installed them in the first place.

All this plays out against a backdrop of public use of public space versus the city’s obligation to maintain its infrastructure.

Might people, operating on their own initiative, add improvements to the city’s infrastructure and then expect the taxpayers to maintain them in perpetuity?

Is the city bureaucracy so inflexible that it cannot find a way to administer these impromptu improvements? 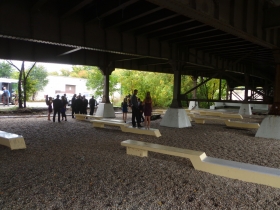 No swings? Photo by Michael Horne.

Who calls the shots here?

Over the course of several months the city removed some swings that were showing signs of disrepair. Hayes says Ghassan Korban, the city’s public works chief, told him the swings would be replaced and redesigned by his staff. But when they were not replaced, and as the number of them diminished, Hayes and his group decided to remove the final two last week, leaving behind a trapeze and a bench swing.

“The last two were removed [Friday, October 4th] by Willie Fields,” one of the volunteers in the Artery project, Hayes wrote.

“We were tired of them being in a state of disrepair after 10 months of them being the responsibility of the city. This was a gift. I am appalled by the city’s inability to avoid such an easy and inexpensive win. Willie himself had made a number of repairs on his own that we offered to keep doing, if the city would reimburse. They declined, claiming these would be replaced, but here we are, these are being stripped from the park a few at a time, not to be replaced.”

Funding is an issue. The city would not like to set a precedent that it be obliged to maintain all contraptions hung from its property. This is budget season, but there appears to be no line item for the maintenance of the swings. Nor can the Commissioner of Public Works unilaterally transfer funds from other purposes to maintain the swings.

It would also be a hard sell to the public to explain diverting taxpayer funds to the swings while much of the city’s infrastructure is in critical disrepair. The commissioner and the mayor have their hands full just keeping the city’s bridges from falling into the river, much less hanging swings from them.

But it’s foolish for the city to be intransigent in this matter, since the swings clearly are a draw to what was once a forbidding area, and it certainly can’t be terribly complicated to maintain swings. The city owns hundreds of them in its school playgrounds, with properly appropriated funds to maintain them.

Jeremy Fojut, the Chief Idea Officer of NEWaukee, says, “as the place-making movement continues to grow, it is becoming increasingly important that space activation be put in the hands of the community. It’s apparent that these swings need to be brought back sooner [rather] than later because the community demands it. NEWaukee is willing to assist in some of the funding needed for new safe swings.”

Julilly Kohler, whose 1993 vision for the Marsupial Bridge, a pedestrian passageway hung beneath the Holton Viaduct, became a reality in 2006, agrees. She feels the government should provide some funds for maintenance, to be released when matching funds are found. She suggests a non-profit organization could be created to accept donations.

Perhaps the easiest way to solve the complicated issue of private funding and maintenance of a public improvement would be to have a Business Improvement District be responsible. BID districts routinely invest in street furniture and other physical improvements.

However, the borders of the Brady Street Business Improvement District #11 do not encompass the Marsupial Bridge, but stop quite nearby.

Possibly the best solution would be to extend the district’s borders to incorporate businesses that have opened or revitalized since the BID was founded in 1991.

The district could easily run as far north as N. Water St at its intersection with N. Humboldt Ave. and E. Kane Place, and could incorporate such places as Trocadero Gastrobar, located immediately to the east of the swings, Brocach Irish Pub, Bel Air Cantina, Fink’s, and the Hamilton. The district could also extend across the river to take in Lakefront Brewery and future commercial development on N. Commerce St.

In the past I have mentioned the possibility of expanding the BID district with owners of all of the businesses mentioned above (with the exception of Brocach), and received a positive response.

But as it stands now, the city has a gift it didn’t ask for, and no money to take care of it. (The city has said it hopes to replace the swings but has given no timeline for this and no details.) Art for the people by the people is a noble idea, but there needs to be consensus and financing when these installations are expected to be permanent and actively used.

So where are the swings that Hayes and his group removed?

On Friday, October 4th, 2013, he wrote: “Those removed will be repaired and installed in Chicago tonight as part of a site specific experiment that will add a swing to 4 other states in the Midwest.” 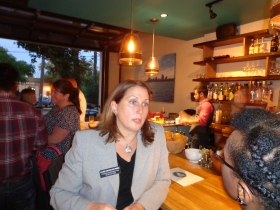 Perez told her audience of about 75 that she hopes to run an “energetic, positive and winning campaign.”

She said, “the election is six months out — election day is April 1st. We hope to raise money for TV, radio, newspaper ads and mailings. We need volunteers’ time for yard signs and nomination papers. Maybe knock on a few doors.”

She was joined at the event by Chris Moews, a candidate for Milwaukee County Sheriff, whose primary election against David A. Clarke will be in the fall of 2014. Both campaigns are being run by Sachin Chheda, the chair of the Milwaukee County Democratic Party and his associate Jason Rae, in 2008 the youngest voting delegate at the Democratic National Convention.

Moews has been showing up at many events lately, and not just concealed carry lessons held in a tavern, like his opponent, the sheriff.

Rae says this is not the time to engage the sheriff, but rather to keep getting his candidate exposed to the voting public. This will give the campaign plenty of time for Clarke to say and do even more ridiculous things.

Another attendee was the candidate’s brother, Ben Gramling.

Gramling said, “No. I guess I better start working on that.”

He was interrupted by his father. “You know there are lots of municipal judge jobs in Wisconsin for non-attorneys. Half of them.”

14 thoughts on “Plenty of Horne: Why We Lost the Marsupial Bridge Swings”