Moderate Mark Bugher steps down as head of UW Research Park after holding many key jobs in state government. 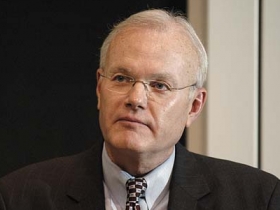 Mark Bugher. Photo from the State of Wisconsin.

Mr. Fixit will clear out his UW-Madison Research Park desk on November 1.

He’s not retiring. He’ll spend part of winter in warmer Arizona, sort through all the consulting and professional offers that will be coming, and he and his wife, Kate, will spoil their two grandgirls, ages 7 and 2, even more. He’ll continue to serve as a director on corporate boards like Marshfield Clinic’s.

“I want, at this point in my career, some elbow room,” the Eau Claire native said in a WisconsinEye interview.

It’s time off that Bugher, who just turned 65, has earned.

He spent 16 years in federal and state government advocating for – and negotiating with – federal, state and local politicians and unions. Then, when he went off to lead the Research Park, he worked with UW-Madison professors convinced they had the Next Big Idea and needed a place to grow their new businesses.

Some of those professors — stem cell pioneer researcher James Thomson, for example – did have that Next Big Idea. Thomson’s Research Park company has about 100 employees.

There are four reasons why, if you Google the term “public servant,” Bugher’s picture should appear.

In that period, the number of Research Park jobs increased by 70%, and construction will soon start on the Park’s second Madison campus.

*Bugher had to tackle some of the toughest issues for his boss of 12 years, former Republican Gov. Tommy Thompson. In those talks, he often struggled to know when he could say yes and when he had to say no. And, if he guessed wrong, he had to deal with a barking governor.

Imagine, for example, one day having to negotiate casino games and profits with all 11 tribal leaders, who each had their own agenda and cultural identity.

*Despite the political hand grenades he juggled, Bugher is respected by leaders of both political parties, and even current and former Madison mayors.

Although he was one of Thompson’s top deputies, Bugher was picked by former Democratic Gov. Jim Doyle to lead a task force that recommended a new way to pay most of the cost of public schools.

It wasn’t Bugher’s fault that what the task force recommended – charging the 5 percent sales tax on many now-exempt goods and services – went nowhere.

Bugher still thinks the task force had it right. “Everybody’s taxes would be a lot lower, if we fairly distributed the tax load.”

“I’m proud of what I did in state government,” Bugher added. “I left with my integrity intact.”

*Bugher knew himself, and his core values, well enough to turn aside all those who often encouraged him to run for Congress, governor, the Legislature, etc.

Three terms on the Eau Claire County Board of Supervisors in the 1980s, and watching how campaigning and non-stop fund raising changed those he worked for, taught Bugher not to listen to the seductive “run, Mark” pleas of his pals. He may also be too much of a moderate to be elected to anything in this polarized political environment.

“My wife would kill me, if I ran for anything,” Bugher adds. “I’d be recalled as a husband.”

Now, Bugher can reflect on the Wisconsin political history he has witnessed.

For example, Bugher says, the “Act 10” law enacted by Republican Gov. Scott Walker and GOP lawmakers in 2011 was needed. Those changes all but eliminated collective bargaining for public employees, except for police officers and firefighters.

State and local public employees were getting increasing salaries and benefits that were not “sustainable,” Bugher added. “History will judge the (Act 10) decision as a fairly good one.”

Bugher may also now find time to complete the credits needed to earn a college degree.

But being the only one in the room without a degree isn’t always a bad thing, Bugher said. “It caused me to work a lot harder.”