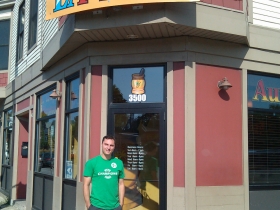 Dan is standing in front of 3500 National Avenue – Layton Boulevard West Neighbors renovated that building which had been a tavern. The first tenant was a Colombian bakery and it currently houses a Puerto Rican restaurant, La Isla.

Neighborhood development, says Dan Adams, depends on bringing people together. “Anyone who is doing anything alone is going to fail,” he says.

Dan Adams works for Layton Boulevard West Neighborhoods (LBWN), which serves the near South area between Pierce St and Lincoln Ave. and Layton Blvd. (27th St.) and Miller Park Way (around 43rd St.). Within that big chunk of territory are the Layton Park, Burnham Park and Silver City neighborhoods.

Adams grew up not far from here, in a neighborhood on the city’s far South Side. He was raised in a family dedicated to public service, with both of his parents being Milwaukee Public School teachers.  His mother worked at Hi-Mount middle school and then South Division High School and his father worked at Milwaukee Bradley Tech high school.

Adams went to the Spanish Immersion Language school, becoming bilingual at a young age, which has helped him greatly in his current job, where many of the neighborhood residents are Latino.  After graduating from Rufus King high school in 1999, he attended UW-Madison, getting a degree in Geography with a focus on Urban Planning.

Upon graduation, he lived in Brooklyn and other places, did a backpacking trip across western Asian countries and finally settled on joining the Peace Corp. He was sent to a small town in northwestern Zambia to help develop fish farming and agriculture programs. “It was really great to be able to work on this project because I come from the home of Growing Power and Sweet Water Organics,” Adams says.

Though he was supposed to serve for two years, a bad bee sting and allergic reaction caused him to be sent home after just a year of service. Upon return, he began working for the 16th Street Community Health Center in its social service division helping people apply for programs like Medicaid and FoodShare. He liked the service aspect of the job but not health care politics. “One thing that was really frustrating is that the health care system is set up to help only people with a certain amount of money, ” he says.

Adams entered the Masters Program in Urban Planning at UW-Milwaukee in 2008, and enjoyed the program immensely. During one of his courses guest speaker Mike Schubert, a former Urban Milwaukee contributor, who was running the Milwaukee Healthy Neighborhoods Initiative at the time, spoke about neighborhood and community building.

Adams was inspired by Schubert’s example and wanted to work in Milwaukee neighborhoods. He was able to land an internship with Pat Mueller working in the Martin Drive neighborhood, south of Washington Park. A real estate developer, Mueller has been working for almost two decades in her community with such projects as a art gallery and art walk. “That woman is incredible, I learned so much from her,” Adams says.

After the internship and graduation, Adams landed a job at LBWN as a community coordinator. After his first year, LBWN received a $875,000  grant from the Zilber Neighborhood Initiative. Joe Zilber had left $50 million of his real estate fortune to help develop 10 inner city neighborhoods in Milwaukee in 10 years.

Adams switched positions to become the neighborhood plan coordinator. With one co-worker, they embarked on a one-year planning process to decide what they would be doing with the grant. They began doing one-on-one interviews with over 75 residents in the community, eventually expanding their reach to business owners, school representatives, faith leaders and non-profit workers in the community. The goal was to find out what kind of improvements people wanted and how they access their neighborhood with things like parks, schools and safety – with a path towards real change that would benefit the entire neighborhood.

After several interviews, they began holding meetings open to people from the three neighborhoods. “We had the first meeting in Carmen High School with over 100 people. It was in the middle of the summer with no air conditioning and I can still picture what everyone looked like, they were all sweating,” Adams chuckles, “but everyone stayed because they so committed to their neighborhood.”

The product of this hard work was a set of guiding principles for their projects including: creating economic vitality; reducing crime; reinforcing homeownership and increasing property values; improving quality of life; and serving as a model of urban development. They have already succeeded at several projects including the Silver City Townhomes, re-purposing a building at 3500 W. National Avenue and continuing the Turnkey Program, that had started in 2008.

The Turnkey Program was developed to address the problem of foreclosed homes in the neighborhoods. The program buys foreclosed or abandoned properties, renovates them with high energy standards and green features and sells them at an affordable price to new homeowners.  Ten homes have so far been renovated.

“Our organization is very proud of what we have done,” Adams says. “These are very difficult projects and we would not have been able to do them without key people in the neighborhood that help us. People are very committed to making this neighborhood a better place and it’s very exciting to be a part of all of the things that are happening.”

Beyond his job with LBWN, Adams is also working on a project to bring soccer to the inner-city, called the Milwaukee Soccer Development Group. He says when he was growing up there was a similar program and he wanted to work with others to bring it back because the only other option for kids is a really expensive soccer program in the suburbs. He is also on the board of a couple developing non-profits, The ReThink Factory that focuses on everyday sustainable living practices, and the Epic Center Community Organization, which is a startup community center for youth that offers after school sports and homework help.

Adams has seen his life come full circle: after his world travels, he’s now settled in the city where he grew up, living in Milwaukee with his wife and four-month-old daughter Ruby.

Correction: The Zilber Neighborhood Initiative grant was for $875,000 not $5 million as the original story reported.