A Giant of Renewable Energy

Digester 10 at the Milwaukee Metropolitan Sewerage District’s South Shore treatment plant is uncharacteristically empty, and thus uncharacteristically clean.  It is three stories tall and big enough to hold at least two of Milwaukee’s trademark bungalows, but it’s buried underground, with ceiling hatches that can open at ground level.  We are at the bottom of the digester, three stories down, looking up toward its ceiling hatches, which are opened today, letting in the light, which streams down like sunlight into a cathedral, a cathedral of renewable energy.

Digester 10 is one of six main anaerobic digesters in which the MMSD converts waste to the methane gas that provides about 50 percent of its energy needs. (It has six other digesters that it uses for storage.) The District’s goal is to be completely energy independent by 2035, but with their digesters, their technology, their partnerships and their history as an innovator, some believe they may get there even sooner. 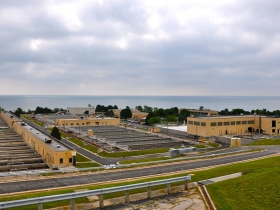 Anaerobic digestion works by using heat and microorganisms to break down organic materials—more or less like composting, but there’s no oxygen in this closed-off process, which means the digestion process produces gas that can be used for energy. MMSD’s twelve digesters take in primary sludge from the wastewater treatment process at both the South Shore and Jones Island treatment plants and convert it to methane gas that can be use to produce energy.  In step one, the wastewater arrives at the plant where first the non-organic solids (things like rags and “flushable” wipes and all the odd bits and pieces of stuff that end up in the sewer) are screened out.  Then the water enters a settling process in which the organic solids sink, and the oils rise.  Oils are skimmed off, and then the organic solids, called primary sludge, are pumped into the 6 primary digesters, four of which hold 3.5 million gallons and two of which hold 1.5 million gallons.

This sludge then begins a 15-day process of being turned into a reusable resource. The process is monitored by Dan Zitomer, Professor of Civil, Construction and Environmental Engineering and the Director of the Water Quality Center at Marquette University, who explains that every day one-fifteenth of the sludge is removed and one- fifteenth is added. The more carbon in the sludge, the more energy produced, unless there’s too much carbon, in which case the process not only fails, Zitomerer says, but “you also have a couple million gallons of putrid waste to get rid of.”

But that has rarely happened. The organic materials collected typically don’t vary that much in the amount of carbon they contain.

Digester 10 is open to light and air on this overcast day in August because it’s getting some new parts.  For maximum efficiency, the sludge has to be agitated.  MMSD’s current technology, about 20 years old, uses long tubes running from top to bottom of the tank, through which bubbles are blown and can then circulate through the sludge, agitating it.  In Digester 10, MMSD is testing a new process, called a linear motion agitator that uses a pumping action and a disc to agitate the bottom 16 inches of sludge.  Later, they will also test a jet system that will blow the sludge at the bottom of the tank into a circular motion.  Whichever system is more efficient is the one they will use, but the expectation is that a 10 to 20 percent increase in efficiency will be realized.  And these new systems will also enable MMSD to take high-strength waste from external sources.

High-strength waste, explains Bill Farmer, MMSD section manager, is stuff like the glycol used for de-icing at the airport that MMSD currently treats, which produces more heat and thus more gas than the mixed household waste that already comes into the facility.  In preparation for this upgrade, Zitomer, at Marquette, conducted an industrial survey in which over 50 industries in a 100-mile radius were surveyed about their wastes.  Adding those wastes to the digesters, Farmer says, could more than double the energy production, increasing it from its current 800,000 to 900,000 cubic feet per day, (enough energy for about 2000 homes), to 2 million cubic feet per day.

Looking at waste as not merely waste, but as a resource that could be used for another purpose, says Gary Radloff of the Wisconsin Energy Institute, is what makes  the MMSD a leader in the field.  “We need to look at wastewater treatment plants as underutilized assets. We invest a lot of money in the infrastructure of wastewater treatment. How can we make that a more valuable asset?”  That, he says, “is where Milwaukee is showing some leadership.”

Progressive, innovative wastewater treatment is not new to the city. As far back as 1926, when most cities were dumping sewage directly into their waterways, Milwaukee was not only treating the city’s water, but also converting it into a value-added product: the organic fertilizer Milorganite.

Milorganite production comes further down the line from the digestion process.  After separating out the biosolids that get pumped into the digesters, wastewater enters a biological treatment phase. Microorganisms are introduced that eat the waste in the water. Once the “bugs” have eaten all the remaining waste, they die.  Their bodies then become the organic matter that is heated and dried and turned into pellets used as fertilizer.  Milorganite comes in nine different pellet sizes, including one so small that it won’t affect the path of a golf ball on a putting green. The product line is still a big seller for the MMSD.

Karen Sands, the MMSD’s Director of Sustainability, says the agency is also innovating by building not just gray but green infrastructure. The gray infrastructure—including the Deep Tunnel, the water treatment process, Milorganite and now the digesters—combine to enable the MMSD to capture and clean 98.3 percent of the city’s total wastewater volume.  The key piece of gray infrastructure has been the Deep Tunnel, built in 1994: Since then, the MMSD has gone from 50 to 60 dumpings a year – each time dumping about eight or nine million gallons of sewage into the area’s waterways (the rivers and Lake Michigan) – to a current average of two and a half a year, which is well under the six annual overflows allowed by the federal EPA. 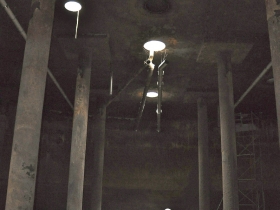 The green infrastructure, explains Sands, deals with the water where it lands, well before it gets into the MMSD system.  Green roofs, rain gardens, porous pavement, rain barrels, and smart water use practices like not washing your clothes in a rainstorm, help keep the system from being overloaded at times of peak rainfall and can thus reduce the amount and number of those overflows that still occur.  Getting the public to participate in their vision may be the biggest challenge yet for MMSD. They have used the carrots of discounted rain barrels, rain garden plants, hazardous waste and medicine collections, to both encourage involvement and to educate the public about their role in caring for our shared water resources. But they have just embarked on their biggest challenge, for which they have no carrots: the upgrading and repair of 3,000 miles of lateral pipes that connect individual homes to their city sewers.  Every one of those pipes is owned by individual taxpayers, many of whom don’t know they own it, much less that they need to maintain it.  Some of them are so old, says Sands, that they’re not even connected together, just laid end to end, lining a dirt hole with waste water from the house pouring into inches-wide cracks between the pipes. Repairing them costs thousands, if not tens of thousands of dollars.

Wisconsin, explains Radloff, is at about the halfway mark for its sustainability.  For instance, the current utility rate structure favors the production of new energy by burning cheap coal, a significant cause of pollution, over investment in renewable energy forms.  Without policies that change that structure, utilities have to make the transition to sustainability on their own and water treatment plants are an important resource:  “There’s a real water/energy nexus.  It takes a lot of water to make energy.  It takes a lot of energy to treat water,” Radloff says.  The MMSD gets that and has a history of looking at wastewater as a resource, he says, for which he gives the agency “high marks.”

Outside the underground facility that houses Digester 10, an engineer from Veolia—the subcontractor who manages the South Shore plant—closes up the hatches, sealing the digester into its normal dark and airless state.  There’s little on the grassy hillside overlooking Lake Michigan to suggest the scope of the operation taking place underground.  Downhill at the water’s edge are the tanks where wastewater is settled, treated biologically and then disinfected.  On the horizon, a thin band of gray sky separates the dark clouds from the lake below.  The weather makes the lake’s water look carbon colored, suggesting the power and mystery of a Great Lake. It has forever provided life for the human societies along its shore, but its water has been declining both in quantity and quality, and it now finds that those humans, for good or ill, are the stewards of its fate. 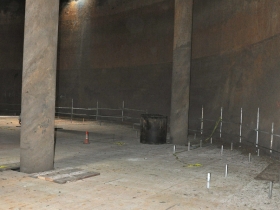 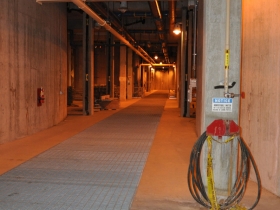 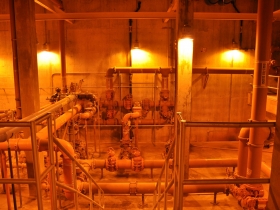 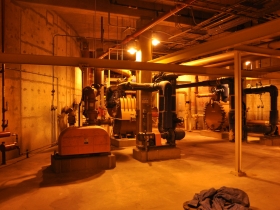 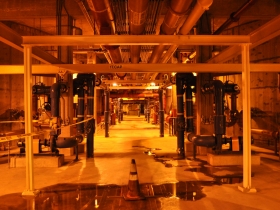