How the Wisconsin Democracy Campaign methodically tracks the countless contributors and millions in campaign donations.

By Bill Lueders, Wisconsin Center for Investigative Journalism - Aug 21st, 2013 03:09 pm
Get a daily rundown of the top stories on Urban Milwaukee

David Julseth may be one of the busiest people in Wisconsin.

His job: Tracking the vast sums flowing into the state’s political system — date by date, donor by donor, dollar by dollar — during a furiously active period that has included 15 high-spending recall elections.

“The last three years has been nonstop campaigning,” says Julseth, 52, data analyst for Wisconsin Democracy Campaign, a nonpartisan elections watchdog. “I was working pretty much every day.” He recalls plugging away late into the evening on New Year’s Eve, “trying to get caught up.”

Good luck with that.

Raised in Wisconsin, Julseth studied political science at the University of Wisconsin-Madison, where he learned the basics of research methodology, including data analysis.

In the late 1980s, Julseth did some data entry for what was then the State Elections Board. After elections official Gail Shea left to start WDC in 1995, he came onboard to help create its searchable database, long before the state’s system had this capability. He is WDC’s longest tenured employee.

Here’s an overview of how money that gets poured into the political process translates into fresh work for Julseth. 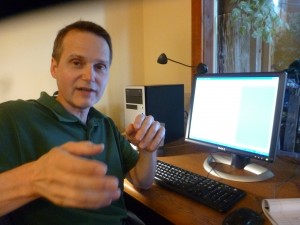 Campaign filings for the first six months of this year, known as “July Continuing 2013” reports, were due July 22. Julseth then downloaded these reports from the Government Accountability Board’s online database.

Julseth zeroes in on candidates for state Legislature and offices including governor, school superintendent and Supreme Court — 156 individuals in all. (WDC does not track some other candidates, such as circuit court judge.) He also pulls in recent amendments to earlier reports, and flagged returned contributions.

Then he begins the process, still ongoing, of using these reports. For each candidate, Julseth prints a summary page containing basic information — total contributions from individuals and committees, disbursements, cash on hand — which he enters into a spreadsheet.

Next he downloads the GAB’s data itemizing contributions to each candidate, checking the totals against the summary page.

“I’m going over every single record myself,” Julseth says.

WDC mainly tracks contributions totalling $100 or more in the same calendar year. Julseth goes through these, coding various kinds of contributions, including those from the candidates themselves. He looks for names that lack employer information, providing these where he can. At times this means looking up people on the Internet.

Even in an off-cycle period like the first half of 2013, there are thousands of contributions of $100 or more. Julseth estimates the task will be done by mid-September. The new numbers will be added to WDC’s database, which lets users track contributions by recipient, donor or employer.

While similar searches can be done using the GAB’s website, many users find the Democracy Campaign’s data more accessible.

GAB director and general counsel Kevin Kennedy says the Democracy Campaign is “doing exactly what the Legislature intended” when it passed the law requiring disclosure of campaign contributions. It’s taking this data and making it easier to for the public to use.

Plus WDC takes the lead in analyzing campaign cash. In a press release in late July, it tallied the relatively modest $2.2 million spent on this spring’s state Supreme Court election, more than three-quarters on behalf of victorious incumbent Justice Patience Roggensack.

In early August, the group noted that legislative Republicans raised $1 million in 2013, more than twice as much as Democrats, and have a sizable lead in cash on hand, $2.5 million to $817,000.

Julseth is glad to be doing work that others find useful, but he tires of the pace, which has kept WDC from a planned systems upgrade he hoped to begin in 2011.

“Maybe this fall we’ll be able to do something,” Julseth says.