All Irish at Paddy’s Pub

No video games or juke boxes, but a lot of Irish atmosphere here. 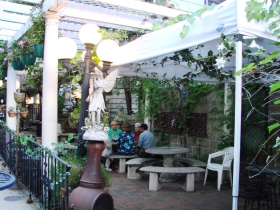 The Irish are known to argue over such issues, but many would call Paddy’s Pub (2339 N. Murray Ave.) the most authentic Irish bar in Milwaukee.

The owners, married couple Patricia “Patty” Wood and Orlen “Woody” Wood, are proud Irish owners that opened the pub in November 1996. They actually bought the building back in the early 80s but didn’t pursue the tavern notion until many years later.

Woody says the building belonged to the Belmonte family prior to them and dates back to at least the late 1800’s. As far as the dates of his marriage are concerned, that’s been “forever” he says.

Patty and Woody knew each other from the neighborhood. She worked at a drugstore on Cass and Wells streets and he worked for the Milwaukee Police Department. “It was just a gradual acquaintance that got stronger,” Woody notes.

After they married, Patty ran a grooming business called Wags N Whiskers out of the front of the building for years, while Woody continued on at the MPD until his retirement in 1994.

After years in the MPD, Woody became experienced in checking licenses and doing undercover work in bars, so for him it wasn’t a hard transition.

“We knew all the right people and all the things that needed to be done to open up a pub,” says Woody.

So as a recent retiree and with Patty beginning to feel the physical toll of grooming, mostly on her hands, they decided to go a new route. Both animal lovers, they originally named their establishment Paddy’s Pet & Pub, LLC.

“Everyone thought it was one of the greatest ideas,” says Woody. Tons of places in Europe do it so it seemed natural to Woody and Patty to have such a business here. 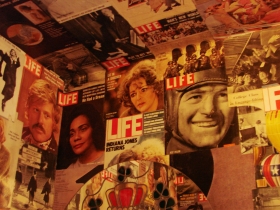 Life magazines on the walls. Photo by Nastassia Putz.

However, upon opening the bar, the health department shattered their dreams of having a pet-friendly venue and told the Woods that only seeing- eye dogs would be allowed on the premises.

That’s when they began referring to it simply as Paddy’s Pub — named after his wife but spelled the Irish way.

The Irish theme then took off, and with the bars and landscapes of Ireland in mind, they began renovating in 1995. Patty did the majority of the designing and decision making on the decor, while Woody helped her build and implement it all.

“There’s not a corner in this building that we haven’t touched,” says Woody.  “We did it all ourselves…and it has been a work in progress ever sense.” 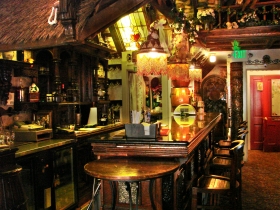 There are four bars and multiple rooms. Each room is connected by its décor but varies in size and use. The Egan Room on the second floor took Woody and Patty 18-months to finish.

The ceiling is covered in stones and has several stained glass accent pieces, along with other unique things such as a peak aligned with antique barrels. The walls are covered in photo arrangements, Celtic designs and signs with Irish sayings.

Woody says the stuff comes from a lifetime of collecting and some of the antiques, especially in the Egan Room, are 100 to 200-years old.

“When I first arrived, Paddy’s operated out of two rooms—it’s been fascinating to watch the expansion,” says regular Christian Tomsey. “I’m still discovering knick-knacks and decorations that have been hiding in plain view for a decade!”

Tomsey has been attending Paddy’s for 13 years for the “craic”—an Irish term meaning good times. He is a high school English teacher, photographer and writer and graduated from Marquette University. 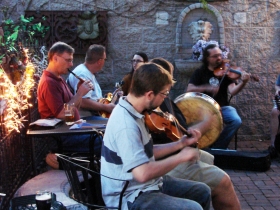 He originally started going because he found the pub to be a quieter place to write and do work.

Tomsey says, “I never enjoyed the loud bar or club scene, and Paddy’s has this ‘someone’s living room’ feel that a proper pub should have.”

Today, as part of the Blackthorn Folly—a local Irish tradition band—Tomsey performs at Paddy’s and participates in weekly Irish sessions held each Thursday. Several other musicians are involved and come to play Irish music.

“We don’t charge a cover charge for live music,” Woody declares. It’s his and his wife’s way of giving back to the community who’ve supported the bar.

Woody says they both enjoy the challenges of running a business. They even bartend themselves and ran the pub without employees for the first three years.

“We do not advertise,” says Woody. “People know us by word of mouth.”

He continues, “People can come here and they can talk because there are no video games, jukeboxes or pool tables.”

Paddy’s has become a social hub and cozy neighborhood bar, and the couple has no goals to change that. With a wry look, Woody adds, “The place works and we’re not going to fix it.” 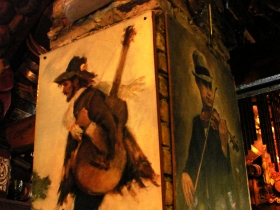 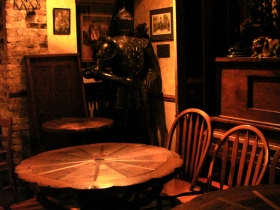 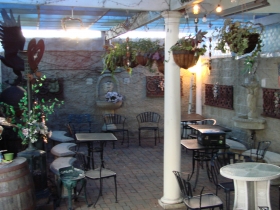 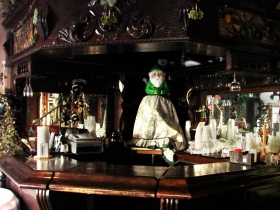 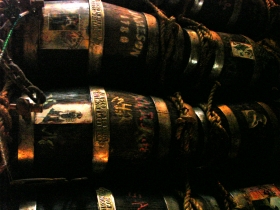 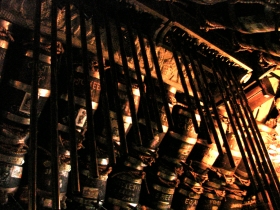 ‘(414) New Day’ is Love Letter to Milwaukee by Jeramey Jannene