By Andrea Waxman, Milwaukee Neighborhood News Service - Aug 6th, 2013 11:49 am
Get a daily rundown of the top stories on Urban Milwaukee 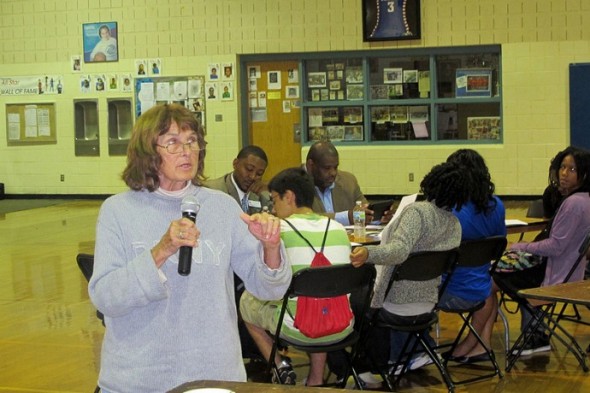 Only 2 percent of Milwaukee students of color in the class of 2012 met all four benchmark ACT scores in math, reading, science and English. This is according to statistics compiled by Milwaukee Succeeds, the data-driven education reform program initiated in 2011 by the Greater Milwaukee Foundation.

To put that number in context, Mike Soika, executive director of Milwaukee Succeeds, said the percentage of students who met all four benchmarks last year was 25 percent in the U.S.; 32 percent in Wisconsin; 7 percent in Milwaukee as a whole and 29 percent of the city’s white students.

Speaking to an audience of about 40 at a recent “town hall” meeting at the Mary Ryan Boys & Girls Club, 3000 N. Sherman Park Blvd., Soika acknowledged that these numbers paint a bleak picture. “The hurdles that we have in front of us seem insurmountable. They are not insurmountable but they are daunting,” he said.

Each member of the community can contribute to “systems change” and it will take community participation and support to succeed, Soika added.

The meeting was the second in a series that is planned to resume in September.

The goal of the town hall meetings is not only to inform the community about the initiative, it is also a call to action. In addition to presenting statistics that illustrate the enormity of the challenge, Soika presented information about Milwaukee Succeeds’ structure and goals. The program seeks to ensure all Milwaukee students are educated from “cradle to career.” 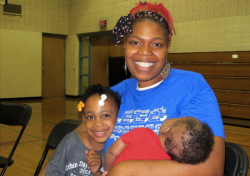 For the sake of the children and the future of the city, Soika asked the attendees to buy in to the program. “If the community isn’t willing to support the changes, they are not going to happen. The kids that are failing will continue to fail,” he said.

Among the attendees were a number of students from Boys & Girls Club’s Stein Scholars program. They were encouraged to come by Kwan Exum, coordinator of the program that prepares high school juniors and seniors for college and supports them once they matriculate.

Many of Exum’s students have experienced serious difficulties in their short lives. “But, that doesn’t mean that we’ve counted you out or society has to count you out,” Exum said she tells them. “You can still do what you need to do to achieve the goals you have set for yourself.”

In his opening slide, Soika discussed the rate at which college students drop out if they haven’t been supported financially, emotionally, mentally and socially. “I think this is really important for the students to see,” Exum said. It can motivate the students to direct themselves away from some of the pitfalls that the statistics represent, she added.

Though Milwaukee Academy of Science junior Jessie Jones knows the odds are against Milwaukee youth, he said he feels he is getting a good education at his school. He is trying to become a Stein Scholar, he added.

Community volunteer Clarice Geenen came to learn more about Milwaukee Succeeds. As a member of the Human Concerns committee at St. Catherine of Alexandria Church, at 76th Street and Brown Deer Road, she became aware of the initiative’s focus on third grade reading when the church’s school became one of five schools to pilot the program. Geenen, who volunteers with her husband at her grandson’s northwest side school, is concerned about improving education for all Milwaukee children, she said.

One of Milwaukee Succeeds’ goals is to increase the number of quality preschools and better educate parents on how to recognize and enroll in them, Soika said.

He noted that research shows a strong correlation between high-quality early care and education and enhanced cognitive and social development in young children. Fewer than 3 percent of Milwaukee childcare providers have earned the highest rating in the YoungStar evaluation system used by the Wisconsin Department of Children and Families.

Maria de Jesus Dixon, the mother of two MPS students and a recent graduate, said she is concerned that what Milwaukee Succeeds is asking of parents is “almost too simplistic.”

“While I appreciate all of the data work they have been doing … I don’t think they’re taking into account real world situations,” de Jesus Dixon said. Given the average income of Milwaukee residents, to ask parents to “find a high-quality childcare center is easier said than done.“

A board member of Parents for Public Schools Milwaukee, de Jesus Dixon said the group “asked a few times to be at the [Milwaukee Succeeds] table and haven’t been invited.”

Despite the challenges, Exum said she is optimistic.  “I have 150-some kids in my case load that are in high school and college and I think of every one of them as my babies. If everybody else who is in the education field thinks the same way, then, yes, I have a lot of hope for Milwaukee education.”