By Ron Seely, Wisconsin Center for Investigative Journalism - Jul 10th, 2013 10:19 am
Get a daily rundown of the top stories on Urban Milwaukee 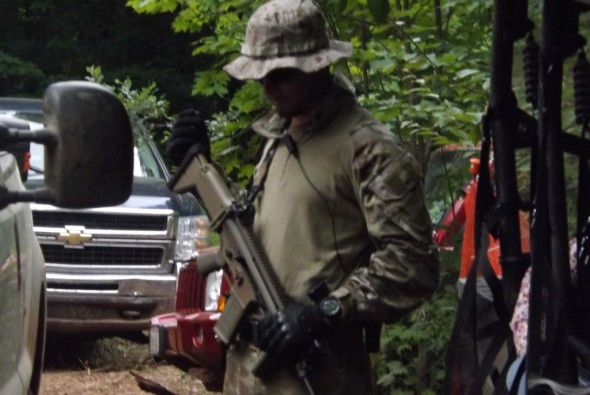 Mine guards on the site of the proposed Gogebic Taconite mine in Northwestern Wisconsin’s Penokee Range. Gogebic officials hired the armed guards from Bulletproof Security in Arizona and said Tuesday that, despite criticism, the guards will continue patrolling the site. Courtesy of Rob Ganson

Despite harsh criticism from two northern legislators and an outcry from anti-mining activists, a spokesman for Gogebic Taconite said Tuesday that armed, paramilitary-style guards will continue to patrol the site deep in the Penokee Range where the company wants to build a large open pit iron mine.

Bob Seitz, a Madison lobbyist representing Gogebic, said the guards are necessary because of a confrontation between 15 to 20 protesters and an unknown number of mine workers a month ago.

“The guards are going to stay,” Seitz said. “We have a responsibility to provide a safe workplace.”

But others say they fear Gogebic Taconite’s hiring of the guards only serves to escalate the already heightened tension over the company’s plan to build a 4 ½-mile-long open pit iron mine in northwestern Wisconsin.

And critics of the company say the guards, especially those wearing tactical gear and armed with semi-automatic weapons, are unnecessary because protesters’ activities have been almost entirely peaceful.

Since the dustup between protesters and mine workers on June 11, the ongoing protest against the mine — centered largely in an encampment of Chippewa tribal members in the woods not far from the mine site — has been peaceful, according to Iron County Sheriff Tony Furyk.

Furyk said that in the incident, one woman was charged with robbery with the use of force, a felony, after she forcibly took a camera away from a Gogebic employee. Organizers of the Chippewa educational encampment — which is modeled on the harvest camps used by tribal members in the past to fish, gather food and harvest maple syrup — say those protesters acted without their knowledge and added that they have since established strict rules to prevent such individuals from using the camp.

Mel Gasper, a Lac Court Oreilles tribal member who oversees the camp, said he now interviews and screens anyone who wishes to stay at the camp. He said the camp is being used not only to monitor mining company activities but also to educate people about the wild landscape of the Penokees.

Furyk said there have been no problems with the harvest camp or with any protesters since the June confrontation. “I’ve talked to the permit holders at the camp and they’ve been very cooperative,” he said.

“They come down in the middle of the night,” Seitz said. “It’s an ongoing security risk.” He added that the company may seek to restrict access to the area in the future.

“There is no reason for them to Rambo up the way they have because things are peaceful,” Bewley said. “After a month of peace, why bring in a paramilitary group? We are not lawless up here. We are not Deadwood where there is no law and you need the Pinkertons.”

Bewley joined state Sen. Bob Jauch, D-Poplar, in writing a letter this week asking the company to remove the guards, who are from an Arizona private security outfit called Bulletproof.

“The images are horrifying,” wrote Bewley and Jauch, “and the action by the company to hire this high security Arizona firm is appalling. These kinds of security forces are common in Third World countries but they don’t belong in Northern Wisconsin.

“We cannot begin to describe how upset the citizens of Northern Wisconsin are at the sight of our forests being patrolled by masked soldiers carrying military style assault weapons like mercenaries in a time of war. While no one can argue that your company does not have the right to protect your private property, these armed guards serve no purpose other than to intimidate local citizens and increase local tensions.”

The guards were first photographed by Rob Ganson, a mine opponent who regularly visits the harvest camp and takes frequent walks to the mine site to monitor activity. He was shocked to see the armed guards in tactical gear with face masks. Ganson, who is not a tribal member, said he has been spending time at the harvest camp to learn more about the tribal view on the mine and has in the past brought his wife along. Now, with the presence of powerful weapons in the woods, he is reluctant to bring her along anymore.

“It has definitely ramped up the tension,” Ganson said. “The last thing we need is a Kent State up here in the hills.”

George Meyer, executive director of the Wisconsin Wildlife Federation, has been heavily involved in mining issues for years. He worked as a lawyer for and served as secretary of the state Department of Natural Resources during the controversial and eventually failed efforts of Exxon Minerals to build a mine near Crandon. That project died largely due to tribal opposition.

Meyer, who has recently given presentations in Iron County on the need for local mining impact regulations and zoning, said the company’s heavy-handed approach, including not only hiring the paramilitary guards but also resisting local zoning laws, could be causing some — including previous supporters — to question the entire mining project.

“This is the kind of thing that backfires,” Meyer said of the guards. “They’re (Gogebic Taconite) losing the goodwill of the public.”